March 26, 2001 – Years ago an old stock market pro told me that sometimes the most difficult thing about markets is believing what you are seeing. It is good insight. His point was that because we usually approach markets with preconceived notions about what we expect will happen, when something different happens we consequently are not prepared.

In other words, it is easy to rationalize what is happening in any given market, waiting for our preconceived vision to be fulfilled. But it can be a very costly mistake if you are on the wrong side of the market waiting for your scenario to unfold, assuming of course that it ever does.

As a result, I learned early on when dealing with markets to constantly evaluate and re-evaluate my premises. Readers who have been with me for awhile can see this approach when I discuss my views on any given market. I first lay out a scenario about what to expect. And I stay with that scenario as long as on-going hurdles or tests that I impose are met. If those hurdles are not met, I then acknowledge that something different is happening, something different from what I had envisioned. I therefore question my premises again, and if need be, lay out a new scenario with new hurdles and tests to make sure that I’m on the right side of the market.

It seems that over the last several months I have been re-testing my premises more than usual. The reason is that the Dollar has stayed much stronger than I had expected. Instead of falling on a number of different occasions when it looked ready to buckle under, it rallied. These rallies occurred even in the face of continuing bearish news, like the record trade deficits being racked up. Nevertheless, we know that the Dollar has largely brushed off this news – at least so far. But this action in the Dollar has been causing me to question my basic premises in a number of different markets. One of these is the stock market.

Over the last year I have said to expect the Dow Jones Industrials to remain in a 10,000 to 12,000 trading range. I have allowed for the possibility that this average could dip back to the 9800 area or so to re-test last October’s low. Actually, we have been waiting for the Dow Jones Industrials to re-test its October 2000 low. And I commented that as long as the Dow did not stay below 10,000 for too long, I would not consider this action to be a violation of my expected trading range.

The reason for this view is that I expect the big, liquid blue-chip stocks (like those in the Dow Jones Industrials) to be a safe haven for bad money – namely the Dollar. In other words, the blue-chip stocks will emerge as currency.

This phenomenon remained pretty much in place over the past year as the Nasdaq tanked. But now that 9800 has been broken and given the renewed strength in the Dollar, it is time to again question my premises. Will stocks be a haven for bad money, causing the Dow Industrials to remain near or above current levels? Or will the renewed strength in the Dollar cause something else to happen?

Readers will recall that there are two basic scenarios that I have mapped out over the past several years. I call these the Nikkei and Weimar Germany scenarios, both of which are actual real-life results.

In Japan the Nikkei topped out in late 1989 and then crashed, but the Yen has survived. In other words, people in Japan continue to use this currency. In Weimar Germany, however, the stock market went sky-high because the Reichsmark was destroyed. What this meant is that because the Reichsmark collapsed, this currency couldn’t be exchanged for nearly anything because everyone recognized that it had been made worthless. So most German stocks at the time became a haven of sorts for bad money, as it was better to hold stocks than the rapidly depreciating Reichsmark. And I have been favoring the Weimar scenario for the Dow Jones Industrials.

Therefore, to summarize, my basic view has been that stocks are in a bear market. I’ve described this bear market in two ways. First, I have picked out a vulnerable stock like Cisco, which I first said was a sale when it was trading around $60. Also, I clearly identified the support points, which if broken would cause CSCO to continue falling. Second, while noting that the Dow Industrials were also in a bear market, I have said to expect that the Dow for the foreseeable future (and by that I meant at least 2-3 years) will remain in a sideways trading range, thereby working off the excesses created in the bull market over the last several years. But my scenario did not stop there.

I’ve indicated that as the Weimar Germany scenario takes hold in the US, the Dow Industrials will eventually go higher in nominal Dollar terms, but it will nevertheless lose purchasing power. I have therefore been recommending, as quoted from thelast letter: “Traders and investors are sitting on the sidelines, earning interest on their funds or having them parked safely in Gold bullion.” 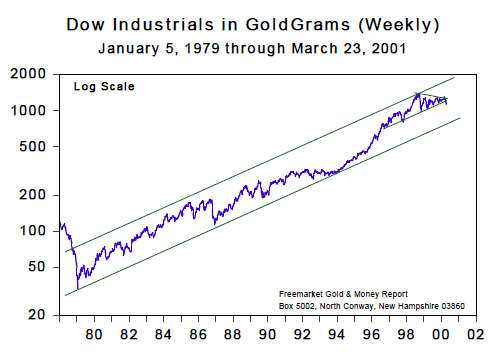 This point about bullion is important. If the Dollar does eventually get destroyed – and history shows that all fiat currency does eventually get destroyed – then we would need a way to measure what is happening to purchasing power. To do this, I have been presenting regularly over the last few years the above chart. It presents the Dow Jones Industrial Average in terms of GoldGrams, the currency of GoldMoney.com, which are grams of gold.

We can see from the page 1 chart that the Dow Industrials appear to be topping out. The long 20-year uptrend channel has run into resistance after reaching a July 1999 peak of around 1369gg. In other words, since then you have been better off holding gold than the Dow Industrials.

Importantly, the triangle pattern that emerged since the July 1999 peak now appears to be breaking down. It was possible that this triangle may have developed into nothing more than a consolidation pattern, from which the Dow Industrials would eventually move higher. But that outcome is looking less likely as this average, as measured in terms of GoldGrams, is now breaking down through the bottom of this triangle.

So let’s re-cap this discussion. After rambling through these different scenarios, I’d like to leave you with a clear view of my current thinking.

First, the Dollar has been much stronger for much longer than I expected. Importantly, this strength is having an impact on many different markets (see also, for example, the discussionon soybeans below).

Second, the Dow has broken through 9800. Consequently, it is possible that for the next few years the Nikkei (as opposed to the Weimar) scenario may yet unfold. If this were to occur, we would get an ‘old-fashioned bear market’. Stocks would then do what we have seen them do many times before. Stock prices will grind relentlessly lower.

The Dow Industrials would correct back in price over a period of probably a few years to where its dividend yield would climb from the minuscule levels at present to a healthy 5%-6%, a level that time and again in past decades has proven to mark a bear market bottom. In this scenario, the destruction of the Dollar is delayed. So while the worst carnage may be avoided (a flight from the currency leading to the eventual complete collapse of the Dollar would clearly be the very worst possible result), the landscape will not be pretty nonetheless. Take a look at the ruin that has occurred in Japan since its bull market topped out there in December 1989.

Third, we can only view the market day-by-day, and its story is still unfolding. The break below 9800 does not necessarily mean that we are going into an old-fashioned bear market. In other words, there are no guarantees here. Rather, the breaking of this support is indeed important, but by itself, it tells us very little. Therefore, we need to watch very carefully what happens from here.

If the Dow stays below 9800 for days, and these days then turn into weeks, we can assume that indeed something important happened when 9800 was broken. But if the Dow Industrials can rally back above this level in the days immediately ahead, then my Weimar Germany scenario is still very much in place. In other words, the test of 9800 was deeper than I expected, but this alone may not change my long-standing outlook for the Dow Industrials and my expected Weimar Germany scenario (for more explanation on this point, see the next article below).

Fourth, that regardless whether we get the Nikkei or Weimar Germany scenario, one will be better off holding GoldGrams than the Dow Jones Industrials. Therefore, we can watch safely from the sidelines while preserving our purchasing power with gold waiting to see what scenario unfolds.