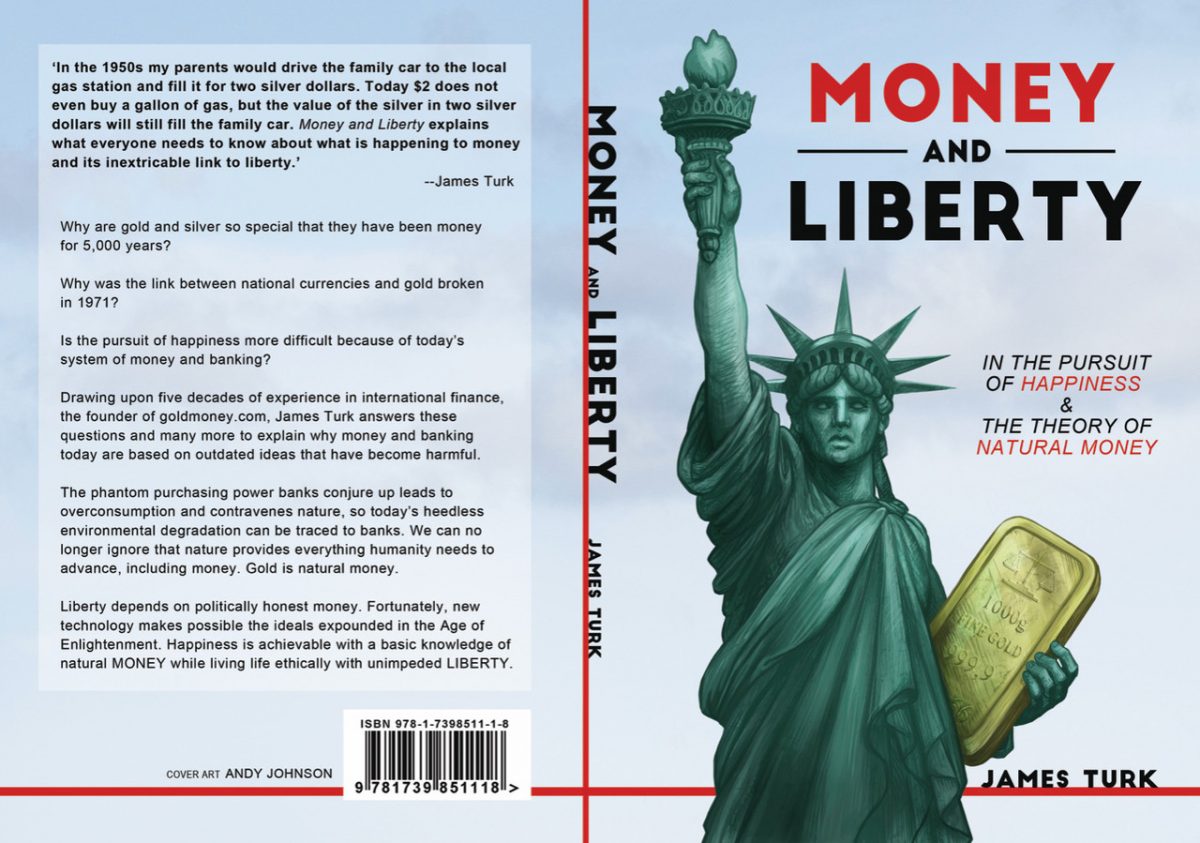 My Perspective on Money and Liberty

Several people have asked why I wrote Money and Liberty: In the Pursuit of Happiness & The Theory of Natural Money while others requested some insight about its content.

My objective was to explain why:

– gold is money and not an ‘investment’, which is not well understood these days, even among many in the gold industry whose livelihood depends on gold

– environmental degradation we are witnessing globally results from government abandonment of natural money, which of course is gold

My view is consistent with gold’s 5000-year history as money and starts to become clear when considering that money is different from currency. Those two words are used interchangeably today, but they are fundamentally different.

Currency is a word purposely created when banks began forming in the seventeenth century. This new word was needed to inform clients that banks were issuing something entirely different from the money their clients deposited. Gold and silver deposited into banks was transformed into currency – paper banknotes or statements of account – that came with risks not found in money. National currencies are not money, but only a money-substitute circulating in place of money.

Currencies do not have the essential features necessary to fulfil all four functions of money, yes, four, not just the three generally considered today as the accepted definition of money. This fourth function of money is beyond the capacity of national currencies because they are not a tangible asset; they are merely a financial asset that is a promise of a bank, which is the source of the risks inherent in national currencies. We know from monetary history that sometimes promises are broken.

Society depends upon economic calculation in which each individual makes countless subjective decisions to improve their situation. It is the essential nature of money to assist this process by effectively measuring value over time and conveying purchasing power from payer to payee. In commerce, an exchange is completed without risk to the seller when the buyer pays with money – but not bank-issued currency. An exchange is only extinguished when a tangible asset with inherent economic value is used in payment for the good or service being purchased.

What is more, the phantom purchasing power (PPP) conjured up by banks through their practice of maintaining only fractional reserves is fundamentally different from the earned purchasing power (EPP) achieved by spending one’s time to create something of value. Creating PPP out of thin air through bank accounting is not the same as earning purchasing power through hard work, but bank-conjured currency does not convey this difference. All workers are at a disadvantage today because regardless of how the purchasing power comes into being, both EPP and PPP compete in the marketplace for available goods and services.

For example, assume a farmer, labourer, office worker, nurse, etc. works for a year and generates $30,000 of EPP from their labour. Now assume that a central bank conjures up $1 million of PPP from bank accounting and gives this currency to the government to spend. There is now $1,030,000 of purchasing power to buy the available goods and services, which causes the price of those goods and services to rise. When viewed in a macro sense, the $8.9 trillion of EPP American workers received from salaries and wages in 2020 was debased by $3.5 trillion of bank-fabricated PPP added that year to the quantity of dollar currency, which explains the growing inflationary pressures now faced by all Americans.(1)

Governments have used central banks and the banking network to disrupt a 5000-year natural monetary system of gold that advanced civilisation and protected individual liberty. Society advances over time from work purposefully expended to create something of value, not from contemptible bank accounting that gives rise to PPP in competition with EPP for available goods and services. The PPP that banks conjure up contravenes the fundamental building block of society that assets created by work are used to pay for other assets also created by work that are then consumed to meet individual needs and wants. The aggregate value produced over what is consumed (our savings) creates wealth, which when successfully invested over time raises our standard of living.

A currency that does not distinguish between the different nature of PPP from EPP tricks the human mind into thinking that the world is wealthier. The detrimental impact from this delusion is overconsumption beyond the earth’s capacity to regenerate natural resources – think depletion of fishing stocks, destruction of rain forests, etc – and environmental degradation – think all the resources wasted in the housing bubble.

Inferior, deceitful currency distorts economic calculation, which has also impacted the environment another way. It is not a coincidence that today’s throwaway culture manifest by single-use plastic began in the 1960s as national currencies lead by the US dollar began their perennial debasement against gold.

Our society can no longer ignore that nature provides everything humanity needs to advance, including money. Gold is natural money, which is gold’s highest purpose. Gold is the only thing in the known universe that does not decay and suffer from entropy, which are essential features for an ideal money. Gold is not the consumable commodity it has been incorrectly portrayed throughout most of the twentieth century, particularly since its formal link to national currencies was broken in 1971.

Essential to this system of natural money is the fight for liberty that is one of the salient features of humanity’s advancement. In Money and Liberty I trace that fight from the formation of the Bank of England in 1694 to the present, describing how in the late nineteenth century banks and autocratic governments determined to obtain greater power gained the upper hand in the ongoing battle for liberty by slowly shunning gold to the point that its role in commerce is now all but abandoned. I explore each of these points and many more about liberty and how today’s currency and banking system is based on outdated, harmful, and long discredited mercantilist policies from the seventeenth century.

It is self-evident that we were not put on earth to follow the orders of authoritarian government. We have free will and can therefore make a choice. In the words of Adam Smith: “The natural effort of every individual to better his own condition…is so powerful, that it is alone, and without any assistance, not only capable of carrying on the society to wealth and prosperity, but of surmounting a hundred impertinent obstructions with which the folly of human laws too often encumbers its operations.”(2)

Our primary mission to live life as so capably explained by Smith and other writers of the Age of Enlightenment is the pursuit of happiness, which they broadly define as acting ethically through one’s own effort to improve their situation. If we are tired, we sleep. If we are hungry, we eat. We work to earn purchasing power that is conveyed by money. The purchasing power we earn provides the money needed for interacting with other individuals in commerce, enabling us to buy those products within our means to meet our needs and wants, which is the basis of society. It is how humanity advances to orderly improve our standard of living over time. Banks can ethically enhance this process and improve commerce by lending EPP deposited with them and to stop creating PPP.

We need politically honest and sound money that only nature can provide. Government must stop hindering gold from circulating in commerce, and society must purposefully allow every individual to earn purchasing power and enjoy the fruits of their effort. This laudable and critically important goal is thwarted when currency is debased, which the writers of the Age of Enlightenment considered to be a crime against humanity. For example, the US Mint Act of 1792 promulgated the death penalty for the debasement of currency, yet today central banks proclaim 2% or more annual inflation as stated policy.

These are matters that affect everyone’s wealth and liberty because of their inextricable link to sound money. Liberty cannot survive in a society that does not have the politically honest money that only gold can provide because gold – natural money – and voting are the two essential measures needed for citizens to control their government. Control over its government is how a polity attains liberty, and control cannot be achieved without gold. This fundamental point is thoroughly explained by the writers of the Age of Enlightenment and more recently as I examine in Money and Liberty, in a brilliant speech given in 1948 by Howard Buffett, father of Warren Buffett.

With Money and Liberty, I share my perspective on both of these critically important matters with anyone who is interested in learning more about money, currency, banking, and their link to liberty. I hope that you find the book informative.

A review Money and Liberty by my colleague Alasdair Macleod can be found here.

Click here to buy Money and Liberty: In the Pursuit of Happiness and The Theory of Natural Money.

1) Using Milton Friedman’s K-Percent Rule to assume the quantity of currency grows by 1.75% per annum, $3.5 trillion of bank fabricated phantom purchasing power (PPP) is the excess dollar currency created in 2020. The formula in trillions of dollars is as follows:

The lag impact from the currency debasement is occurring now because of the Cantillon Effect, namely, that new currency injected into an economy does not immediately increase price levels. The inflationary impact occurs over time, benefitting those who spend the new currency to take advantage of its maximal purchasing power before the debasement sets in.