February 12, 2001 – Over the years I have presented in these letters several different, but meaningful, ways to measure Gold’s relative value. Long time readers are aware that my favorite measure is my Fear Index, which by the way has at the end of January reached an all-time low of 0.97%.

Another measure I have presented in past letters is the inflation adjusted Gold price. Although this measure seriously understates the rate at which the Dollar’s purchasing power is being eroded, it nevertheless still shows how undervalued Gold has become. Using the Consumer Price Index to adjust for the Dollar’s diminishing purchasing power, the $35 per ounce Gold price in January 1934 today equates with $463 per ounce. I’ve also shown how Gold is cheap compared to the $20.67 price in December 1933, which we know from the horrific banking crisis underway at the time was a price which significantly undervalued Gold. Incidentally, this $20.67 price up until recent years had been the record undervaluation of Gold, or I should say to put it correctly, thegreatest overvaluation of the Dollar. But no more.

At $259.90, Gold today is valued less than the extreme low valuation from 1933, although again, the correct way to state this relationship is that the Dollar has never been more overvalued. Using the CPI to adjust from December 1933 to the present, the Gold price today would be $274 per ounce.

I have also used crude oil to show how Gold is undervalued, by measuring the price of crude oil in terms of GoldGrams. In November it took a record 3.989gg to purchase one barrel of crude oil. Even though this relationship has fallen somewhat to 3.469gg, it is still well above the historical average of 2.239gg. At a current crude oil price of $31.03 per barrel, Gold today needs to be $431 per ounce to give GoldGrams their average purchasing power of 2.239gg/barrrel.

I guess you get the message. By any of these measures Gold is cheap and undervalued. But to reinforce this message by giving it yet a different perspective, I’ve come across another interesting method of valuation.

A friend had asked me to provide him with some international financial statistics. This data is compiled by the International Monetary Fund and is available in their annual International Financial Statistics Yearbook. The usefulness of this new method of valuation struck me while I was putting together this data. But before I explain this new valuation method, some background information about ‘fractional reserve banking’ and a little bit of banking history is necessary to appreciate this methodology’s importance.

Fractional reserve banking is the practice of keeping only partial reserves against banking deposits. For example, if one ounce of Gold (valued at $35 per ounce) was deposited in a bank, the bank would typically issue $87.50 of currency. All banks employ this practice, which many people including me believe to be deceptive, and some argue is fraudulent. Be that as it may, the relationship between the quantity of reserves and the Gold price is important. 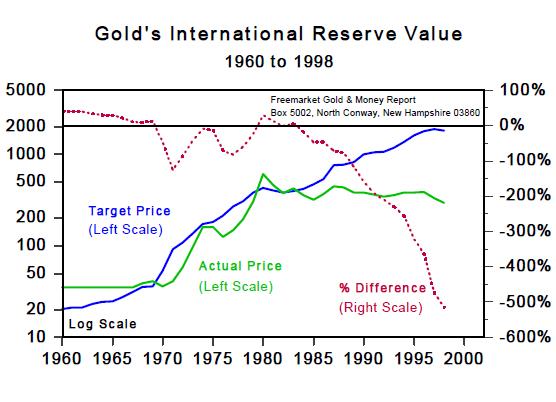 In the worst case scenario, if a bank was imprudent and did not maintain sufficient reserves and/or had a portfolio of bad loans, it failed, and the money substitutes it had created became worthless. In the best case scenario, if the bank had sufficient liquidity and reserves, the money substitutes were redeemed for Gold at the rate fixed by law (i.e., one ounce for every thirty-five Dollars), with the result that the bank survived the crisis.

These different valuations weren’t a concern until there was a banking crisis. In a crisis, the reserves determined how overvalued the money substitute had become.

Therefore, it is useful to look at this relationship between Gold and reserves, which is what I’ve done for the world economy. The result is presented in the chart above.

There are two prices for Gold in the chart, the actual price and its reserve value (labeled the ‘target price’), which is calculated by dividing total reserves in the world’s central banks by the weight of Gold they report that they own. The right hand scale shows in percentage terms whether the actual price was more or less than this calculated target price.

You can see from the chart that back in the early 1960’s when the Dollar was still considered to be ‘as good as Gold’, the actual price was less than the target price. In other words, central banks had adequate reserves on hand to maintain the value of the national currency circulating as money substitutes. But that relationship began to change by the mid-1960’s. The target price rose above the actual price. In other words, Gold was worth more than $35 per ounce.

This $35 valuation could no longer be maintained because the Dollar had become so debased. So eventually the Dollar was devalued from this $35 level, and subsequently, the formal, fixed link to Gold was broken. Nevertheless, the actual price and the target price stay more or less in synch with each other, until the late 1980’s. While the target price has continued to rise, the actual price has moved sideways, creating an unprecedented gap between them.

Today Gold is trading around $260, but the target price is $1,812. The important question is why?

There are only two alternative answers, and I’ve mentioned them before in other discussions, so long time readers should know what they are. Either Gold no longer is money, or Gold is extremely undervalued. There are no other explanations to this ‘gap’ in prices on this chart. In my view the latter alternative is the correct answer.

We today look back at Mississippi Bubble and the South Sea Bubble with smug amusement and ask ourselves laughingly how could the people back then have been so foolish. No doubt people generations from now will look back at circa 1970 to 2000 and ask themselves the same question.