March 24, 1997 – Like bombs from the belly of a B-52, T-Bond prices are falling around the world. It is a phenomenon not confined just to the United States. Bond markets everywhere are responding to the rapid expansion of global liquidity that has been taking place since 1992. I’ve discussed this monetary phenomenon before, and identified in late 1992 what I perceived at the time to be an important and fundamental change in trend.

Published on November 23, 1992, Letter #115 was entitled Inflation or Deflation? We Are At A Crossroads. I noted therein that there were two sides to the argument that attempted to explain the outcome for the Dollar.

“The deflationists argue that another 1930’s type collapse will be the inevitable result of the debt bubble created over the past three decades. Also accurately recognizing debt to be the cause of the problem, the inflationists argue just as forcefully that the debts can only be met by inflating away the purchasing power of the Dollar.”

Although I had clearly been on the deflationary side of the argument until that time, I declared back then that “I have moved toward the inflationary side.” Since then I have been explaining in these letters why inflation was returning. I have also been presenting my arguments and reasons to expect more debasement for the Dollar.

Since then, commodity prices have been rising. Rates of inflation have risen steadily, even by the federal government’s own tame measures of inflation. And interest rates clearly stopped falling, as sure a sign as any that we are operating in a very different monetary environment today than we were in the 1980’s and early 1990’s.

I identified in 1992 three areas of concern. Again quoting from Letter #115, these are:

“First, the growth of the national debt is out of control. Second, …[the] tacit mission of the Federal Reserve is to maintain the illusion that the Federal government is solvent. Third, …[the]national monetary authorities now operate without the constraints of any external discipline [like the discipline that was imposed by the Gold Standard], so the Federal Reserve and the banks can create money at will and without regard to well defined and unbreakable rules.”

There have been no changes since 1992 that would suggest we are moving back toward the disinflationary and deflationary pressures witnessed in the 1980’s and early 1990’s. I therefore remain firmly convinced that inflation – and as I noted back in November 1992, perhaps even hyperinflation – remains the fate for the Dollar. Consequently, the inevitable and ongoing erosion of the purchasing power of the Dollar will ultimately lead to the collapse of the T-Bond.

After all, the T-Bond is only a promise to pay Dollars. If those Dollars are inflated away, what’s a T-Bond worth? 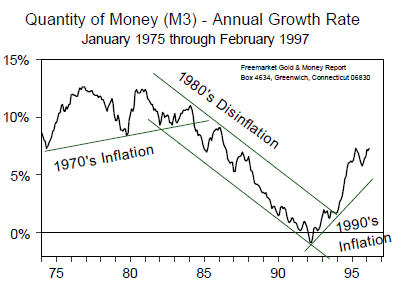 Nothing but the hollow promise of some politician. Study the above chart carefully. It presents the 12-month growth rate in M3, a broad definition of the quantity of Dollars in circulation. Note the three clear and distinct trends on the chart.

In the 1970’s, we had double-digit rates of inflation because M3 was growing at double-digit rates. Paul Volcker was given a mandate to reduce this Dollar inflation when he was appointed Chairman of the Federal Reserve Board during the inflationary turmoil of President Carter’s administration.

Mr. Volcker was successful in reducing inflation because he was able to reduce the rates of growth in M3. Inflation fell throughout the 1980’s and early 1990’s because M3 growth rates were falling.

After his appointment to the Federal Reserve in August 1987, Alan Greenspan initially followed Paul Volcker’s monetary policies. However, in late 1992, Mr. Greenspan abruptly changed course. M3 has been growing briskly ever since, as has the rate of inflation. Further, because monetary growth leads the reported inflation rates, the above chart shows that there is a lot of inflation in the pipeline.

The Dollar is in bad shape, but so is most every other national currency as well. It is a scary state of affairs, but also a tremendous opportunity, if we are on the right side of this new rearranging of wealth. Avoid Dollars and T-Bonds. Don’t rely upon politicians’ promises. Depend instead upon hard assets.