July 12, 2007 – Federal Reserve chairman Ben Bernanke delivered on July 10th a lengthy presentation on the public’s expectation of future inflation. The full text of his speech can be read at the following link: www.federalreserve.gov.

In recent years the Federal Reserve has made much of its contention that inflation is a result of inflationary expectations. It asserts that if people expect inflation, there will be inflation. This theory despicably deflects attention away from the true culprit because it is not the public that causes inflation, but the Federal Reserve itself. As anyone who experienced the inflation of the 1970’s and/or has read Milton Friedman knows, inflation is a monetary event. If a central bank creates too much money or otherwise takes steps that debase the currency, prices of goods and services rise.

Nevertheless, defying experience and reason as well as shamefully placing the blame on the public instead of himself, Mr. Bernanke says: “Undoubtedly, the state of inflation expectations greatly influences actual inflation and thus the central bank’s ability to achieve price stability.” In other words, he contends that if expectations about future inflation are low, then inflation itself will be low.

The Fed seems intent to pursue its novel theory of inflation, which is an observation that is important to each and every one of us. Remember, central bankers only tell us what they want us to hear, so consider some of the logical corollaries to the Fed’s new theory that it doesn’t tell us. For example, if the Fed believes that inflation is the result of the public’s inflationary expectations, what is it doing to form our expectations about future inflation?

Clearly, one step the Fed has already taken was to stop reporting M3, the total quantity of dollars in circulation. See my previous article on this point written last year but available at the following link: The End of M3 – The Truth about Inflation.

I wrote in that article: “If people don’t believe inflation is a problem, the Federal Reserve has more opportunity to intervene, taking actions potentially debasing and inflationary to the dollar and to do this without consequences. Or at least that what’s the Fed thinks. But the Fed is only fooling itself.” Well, judging from Mr. Bernanke’s speech, this Fed still seems intent on fooling itself.

Here is another corollary to the Fed’s unique theory of inflation that is worth considering. Has forming the public’s expectations for future inflation morphed into attempts to control their expectations? It then naturally follows to ask, how better to control inflationary expectations than by controlling the messenger of inflation, i.e., the price of gold? After all, a rising gold price alerts the public to inflation and other dollar woes, so how better to mask those woes than by capping the gold price to mislead people into thinking that inflation is not a problem?

Much has been written by me and many others about the government’s surreptitious efforts to cap the gold price. This material has been published by the Gold Anti-Trust Action Committee and is available for free on its website: www.GATA.org

Critics of this body of evidence have dwindled in recent years as GATA’s arguments have become so obviously compelling. For example, in these current inflationary times all the metals have made or are near record highs except gold and its close cousin, silver. How is that possible except for price manipulation?

Nevertheless, some remain critical, often saying that GATA’s work fails to explain the government’s motivation, which proves they haven’t read GATA’s entire body of work. Their comments also ignore monetary history. Throughout the ages, but particularly in the 20th century, governments have fought gold because as a non-government form of money, this precious metal uniquely and reliably made clear to all the debasement of government issued currency.

My point is that Mr. Bernanke now clearly explains the government’s motivation, which will hopefully silence GATA’s remaining critics. By controlling the gold price, the government aims to control inflationary expectations.

Here’s some visual evidence of what I believe to be government price capping. The following Kitco chart presents gold’s intraday movement on July 6th and 9th.  Note the sharp upward spikes in gold’s price, after which gold moves sideways. There are a couple of important observations to make about this chart. 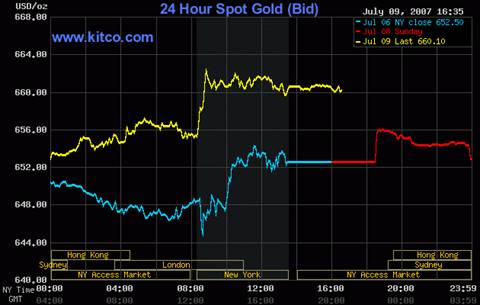 2. On both days we can see that the gold price was capped by sideways trading action. Little physical trading takes place in New York after London closes. Thus, each rally attempt was met by whatever futures contracts (i.e., paper promises to deliver gold, but not physical gold itself) were needed to defeat further rally attempts after the London close, which is confirmed by the build-up of Comex open interest on both days.

Gold is cheap and undervalued at current levels, which means that central banks are finding it more difficult to cap its price. Therefore, to let off some of the buying pressure that builds, they step back from their price capping before the London fix by allowing its price to rise, and then defeat further rally attempts by supplying paper on the Comex. It’s like letting some steam out of a pressure cooker to keep the lid from blowing off, but then closing the valve before all of the pressure is released.

While the government’s motivation for capping the gold price should now be clear, it is not, however, a reason for concern. Central banks have been doing us a favor by keeping the gold price lower than it would otherwise be if they weren’t capping its price. As we earn debased and inflated dollars, we can exchange them for more gold than would otherwise be the case if the government were not capping its price.

While it is of course frustrating to see the free market undermined, that is simply recognizing the reality of the way governments these days work. To paraphrase the greatest economist of the 20th century, Ludwig von Mises, governments will destroy free markets long before they ever understand how they work. Just look at the present crisis in Zimbabwe for proof of that statement. Hopefully the US government will learn from the Zimbabwe example so that the growing dollar monetary crisis does not also turn into a US economic crisis as well.