December 17, 2001 – The above title might be somewhat premature. Complete control may not yet have been lost, so instead, it is perhaps more accurate to say that the Fed is losing control. And then again, maybe even a further refinement is necessary, changing Fed to feds. This additional change is needed because it seems clear that there is a wide effort of government-led actions impacting the dollar and the US economy.

The Federal Reserve has not been acting alone to influence the economy, but rather, has been taking steps along with other parts of the US government – oops, I forgot that the Federal Reserve is not a government agency. It’s name only sounds like one, but that’s another story.

On second thought, I’ll make the Fed’s ownership and the control of it as part of this story, but let’s begin with what is happening in the economy and the markets. Then we’ll end up looking at the Fed’s ownership to work out some possible motivations that attempt to explain why the Federal Reserve and its cohorts in the federal government are doing what they are doing. And what is it that they are doing?

Take a look at the accompanying chart. I last presented this chart in Letter No. 294 with it showing monetary growth through October 2001 and explained the reasons why I am expecting a “Flight from the Dollar”, a concept that I have been discussing now for years. More ominously, I also explained in that letter the similarities in the economic and monetary situation today in the US to that of Weimar Germany.

Yet more ominously still is what this monetary growth chart looks like now, given the addition to it of November’s numbers. Monetary growth is heading for the moon, just like it did in Weimar Germany. The rate of growth is so high I’ll probably need to rescale this chart within the next month or two. M3 is now growing at 14% per annum, the highest rate of growth since 1971, a date in time significant for two reasons.

The surge in money in the early 1970’s (the highest growth rates occurred in 1971) set the stage for the inflationary pressures that decimated the purchasing power of the dollar for the next decade. The other reason that 1971 is important relates to gold. On August 15th, 1971, the dollar’s link to gold was severed.

So debased had the dollar become, President Nixon – like President Roosevelt had done only 38 years before – devalued the dollar relative to gold. But Nixon went one step further. He ended the dollar’s formal link to gold. Note my emphasis on the word formal. The dollar’s link to gold remained, as evidenced by the ongoing dollar/gold rate of exchange (i.e., what is usually called the ‘gold price’). After this break in the link, gold still was money. Only the formal dollar-to-gold link was ended, meaning that the dollar would no longer be defined as a weight of gold. 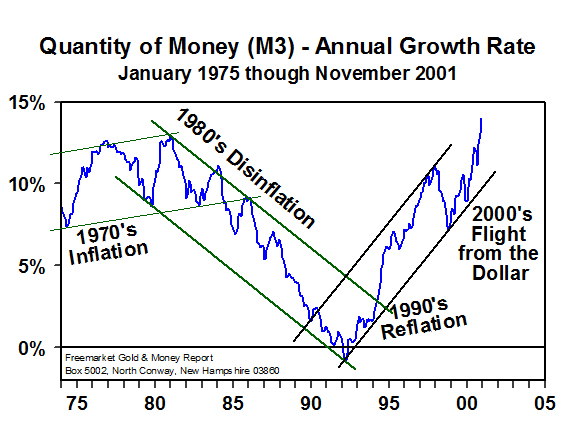 The dollar was turned into fiat currency. In other words, the dollar was circulating as currency because it had been considered ‘as good as gold’. Thereafter the dollar was circulating as currency because that was the law. The quality of the currency had little to do with it, or at least that is what the US government told the people. But people quickly learned that fiat currency was not the same as a currency that was as good as gold. They took steps to protect themselves by protecting their wealth. People began to value the dollar less highly, goods and services more highly.

I was thinking about $850 gold as I sat down early this morning – as I do every Saturday morning – and started studying my charts and various other indicators and models that track the markets and the economy. And I was struck by the developing trends, all of which were contrary to the aims intended by the Federal Reserve and the US government. My sense of what I was studying was that the ‘feds’ were losing control.

I already discussed in the last letter my view on long-term rates, but the ongoing collapse in bond prices makes it prudent that I re-emphasize this point. Long-term interest rates are headed higher. The upward spike in bond prices that occurred after the Treasury’s announcement to eliminate the 30-year T-Bond was every bit as significant as the upward spike in gold prices in January 1980, but with one difference. While the gold price will eventually approach and then exceed $850, long-term US dollar interest rates will never, ever be as low again. Fiat currency interest rates are headed higher.

Just over a week ago I sold short the dollar against the Swiss Franc around SFr1.66 in the overnight market. Everything was lined up properly looking like the dollar was about to collapse. But a day later I was stopped out of the position as the dollar rose. Then as the dollar fell from its new high around SFr1.672, with much frustration I watched for a spot to again jump in.

Buy. Get stopped out on a surprise reversal. Then try to find a new spot to buy. This pattern has been repeating for months.

After a lot of angst, I fortunately re-established the position on Thursday, as the Swiss Franc that day pulled back to its 18-day moving average. Then the Swiss Franc on Friday made a surprise upside break-out from the base it has been forming.

The same thing occurred for Gold and Silver too. Both of them had break-away gaps (see my commentary on Page 4). But it doesn’t stop there. A number of markets have begun moving in a direction that is the opposite from the way the Federal Reserve and the US government would like to see them moving.

Starting with the gold stocks, big moves were made last week in a number of the stocks in our portfolio, most notably with new break-out highs in Harmony, GoldCorp and new addition Durban Deep. The XAU has not yet broken out, but at 55.73 is close to doing so. An XAU close above 56 would signal that break-out.

The dollar has broken down from a short-term uptrend in the Dollar Index, even though the Japanese Yen has made a new low against the dollar. This dollar weakness is putting upward pressure on commodity prices across the board. In particular, I expect that crude oil prices have bottomed, as have heating oil and natural gas. I’ve not yet bought the heating oil I will need for my house this winter, but now plan to pre-buy at current low prices what I will use for the rest of the season.

Soybean prices also look like they have bottomed. They will probably rise in price as the dollar weakens, as well as in anticipation that the mid-west is finally due to have a poor year for growing crops, after it’s recent run of successes.

The collapse in the Dow Jones Utilities Average is due to more than just the Enron debacle. Higher interest rates and higher crude oil prices are a recipe for disaster for the utility companies, particularly in States like California where politicians think they are smarter and/or more powerful than free-markets. And ominously for the economy, the stocks of the big banks look very weak here, and ready to re-test their September lows.

I could go on, but I think you get the point. The Federal Reserve and the US government have reached the end of the road. They are losing control. From here on, they will no longer control the markets; rather, the markets will control them.

Free-market forces are already in control of the bond market, which explains why long-term interest rates are climbing despite the ‘feds’ obvious desire to keep them low in order to help stimulate the very weak US economy. My sense is that free-market forces are now taking control of the dollar, which will be the second market to slip from the grip of the feds. Look for the dollar to collapse in the weeks ahead, and I will use this opportunity to re-establish my longstanding dollar target of SFr 1.30 or below.

And finally, the ‘feds’ will sooner or later lose control of the gold market. This market is the most important one to them, because when gold starts soaring, the illusion of dollar strength, sound US banks and low inflation will disappear in a flash. By then the flight from the dollar will be well underway. And who are these ‘feds’?

As I noted earlier, the Federal Reserve is not a US government agency. It gives the pretense of being so, beginning with its name as well as its government-like pronouncements and use of force to intervene in free-markets. But the fact is that the Fed is a private institution, owned by its member banks and in reality controlled by the big US banks. Alan Greenspan takes his orders from Wall Street, not the White House. So what are the big banks trying to do by forcing M3 growth rates well into double-digit levels?

The answer is very simple – the big banks are in trouble. Very serious trouble. Their portfolios have growing amounts of bad loans with little hope of repayment. The banks are up-to-their ears in complex derivative deals, like those that sunk Enron as well as Long-Term Capital Management before that. Enron is going under with billions of bank debt. Argentina has all but defaulted on its $130 billion of foreign debt, much of it owed to the big US banks. And these are just some of the more visible problems that the banks are facing from their pursuit of profit through reckless lending and wild derivatives trading. In short, the banking system is teetering on the verge of collapse.

So the banks are now doing what they have always done when they get themselves into trouble. They tell the Federal Reserve to open the monetary spigots, and the Fed always responds. The Fed has to, because the Fed is not there for your, my or the benefit of the American people. Rather, the Fed is a tool that the big banks use to keep afloat their game of fractional reserve banking, i.e., their game of creating money out of thin air. But not for much longer, because this time it is different.

I rarely use these five words because history always repeats. Or as Mark Twain said, if it doesn’t repeat – it just rhymes. We’ve seen it all before, only the places and the characters change. Dr. Alan Greenspan please meet Dr. Rudolf Havenstein, Governor of the German Reichsbank in the early 1920’s.

What the dollar is about to experience is different from anything it has ever gone through before, but these coming events that I expect are not new to history. They are only new to the dollar.

Due to a collapse in the demand for money and an incorrect response by the central bank, the dollar is about to go the same way as the Reichsmark. We are at the beginning of a flight from the dollar. The feds are rapidly losing control, and once the market controls them instead of them controlling the market, the dollar will reach the point of no return. It will be dumped.

For this reason, I have not extended the channel lines on the Page 1 chart – they no longer matter. Monetary growth of the dollar has broken out to a new high rate, and the slope of the old lines is not rapid enough to capture the new explosion in dollar growth. The old trend lines are no longer relevant – or in other words, we are moving into uncharted waters