October 16, 2000 – Most everyone assumes that a crash in the stock market is the Federal Reserve’s worst nightmare. There are many sound reasons to reach this conclusion, including the following:

1) The stock market has played a central role in the so-called ‘new economy’ that supposedly has boosted productivity and wealth creation without unleashing the inflation bugbear. The fear is that because the stock market has become so important, a collapse in stocks would severely impair economic activity.

2) A collapse in stocks would melt down the net worth of many consumers who are heavily invested in stocks, which would cause consumer buying to slow, further impairing the economy.

3) The federal government has been flush with money from tax revenue generated in recent years by the gains garnered by individuals in the stock market. The rate of growth in new federal debt creation would once again begin to accelerate if this source of revenue were to disappear, which it surely would in a bear market.

Though each of these points are valid, I think the Fed has a another nightmare that is much worse than a stock market crash. I think there is a bigger problem that makes the Fed’s governors wake up at night in a cold sweat.

Remember that Alan Greenspan has already experienced one stock market crash. He was first appointed in August 1987. He already has hands-on experience in responding to a market melt-down, so another is probably deemed to be manageable. I sincerely believe that he and his colleagues are not as concerned by a crash in stocks as they are by a crash in the Dollar.

I think this proposition will soon be put to a test, as will another proposition that I have been making in these letters in recent years – namely, that the stock market will head higher in nominal Dollar terms (but not in purchasing power terms). In fact, if we measure the Dow Jones Industrials in terms of GoldGrams instead of Dollars, we get a different picture that shows my proposition is already happening. 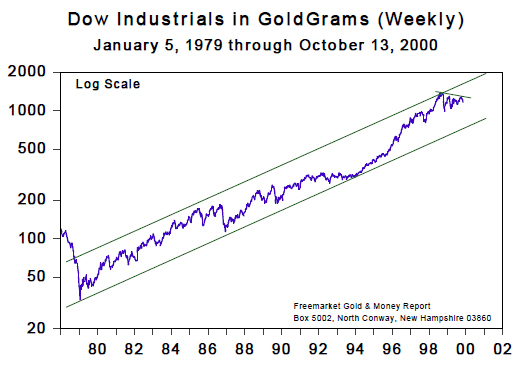 The accompanying chart of the Dow Jones Industrials topped out in July 1999. The Dow Industrials reached a new high in January 2000 only in Dollar terms, not in terms of GoldGrams. So by using GoldGrams to measure purchasing power, we can see that since July 1999 you would have been better off holding Gold than the Dow Jones Industrials. This alternative measure of purchasing power used in the accompanying chart explains why I have been drawing a parallel to the stock market in Weimar Germany in the early 1920’s as that country’s currency was debased and eventually destroyed.

In short, the Federal Reserve is contending with two different bubbles – one that has inflated stock prices and one that has inflated the Dollar. In both cases, values are well beyond prudent levels, but the Dollar is the biggest bubble by far. As readers know, I firmly expect that the Dollar will in time cease to circulate as currency. It has already been seriously debased, and what’s even worse, this debasement continues. The Dollar is being irreparably damaged by the reckless expansion of credit that has been aggressively pursued – particularly over the last decade – by the nation’s banking system.

I will leave to an upcoming letter a review of my Fear Index to demonstrate how badly debased the Dollar has become. For now, I will address the response of the Federal Reserve to these two bubbles because a couple of readers have raised a thoughtful question about my basic premise about the Dollar.

They make one key point. Why would the central bankers allow the Dollar to be destroyed while the stock market goes up and up, repeating the Weimar Germany experience? In other words, will the Federal Reserve really sacrifice the Dollar in order to keep the stock market bubble from popping?

There are logical reasons for this conclusion. First, the market is bigger than the Federal Reserve and the US government. No government can force people to accept and use a currency that they are unwilling to use. This basic proposition is a building block of the way that free markets work. Von Mises said that governments destroy free markets long before they ever understand how they work. The same truth can be said about government managed fiat currency, as fiat currencies will be destroyed by governments long before they ever understand the essential nature of money.

Second, the Federal Reserve in reality only has two tools at its command. It can add liquidity, and it can jawbone. That’s it. Generally it uses these tools effectively, but what if the Fed makes a mistake, which brings up the third reason.

We’ve seen in the collapse of the Soviet Union and countless Third World governments that command economies don’t work. In the end, the managers make mistakes and/or are corrupted by political forces. The Federal Reserve and the US Dollar are not immune to these same problems. The Dollar is a managed, ‘command’ fiat currency. Though most people assume that the Fed will manage it right, it doesn’t always work that way.

To be successful, the Fed always needs to outguess and outsmart the market. That’s an impossible task, as past Fed failures show. History demonstrates that the Federal Reserve doesn’t always get it right.

The Fed does have some successes. They guessed correctly after the 1987 crash. But will they guess correctly next time? Even if they do, can they forever hold back an onslaught of Dollar selling?

The Fed’s powers are not unlimited. The Fed cannot force people to hold Dollars if people want to dump those Dollars, which I believe they (mainly foreign holders) will do in mass as the Dollar bubble pops. Those Dollars will be spent everywhere imaginable because popping the Dollar bubble will cause a flight from currency, just like occurred in Weimar Germany. Inevitably much of that money will end up in the stock market on the premise that good stocks will always represent a refuge from bad money. So the Dow Industrials will rise in nominal Dollar terms, but not in purchasing power terms, continuing the trend that began in July 1999, as shown on the Page 1 chart.