August 28, 2000 – It’s time to update my forecast for the precious metals. Readers know that when Gold broke below $300 in February of this year, I took a somewhat lukewarm approach to the metals for a short-term outlook. My initial forecast expressed in Letter No. 259 (February 21, 2000) was: “The big move up [in Gold] will probably occur later in the year.”

In the next couple of months I refined that forecast to say that the rally would occur in the last half of this year. I subsequently narrowed the time frame for that forecast, saying that September and October were the months that I was looking for Gold to finally rally.

In recent letters I have been saying that Gold is at or very near its final bear market low. And while is it obvious that a rally can begin at any time, I have continued to forecast the September/October period as the most likely date for the long awaited rally to begin. Am I still comfortable with that forecast? In a word, yes, September/October looks like the right time frame for Gold to begin a rally. And to refine that time frame further, I expect Gold to remain subdued for a couple more weeks. So I think we have until the middle of September before the rally begins in earnest.

What about Silver? I have been fairly consistent here as well. A few months ago I set a $4.40-$4.50 downside target. We have been on the sidelines waiting for that target to get hit, and it is now in sight (see my analysis for Silver on Page 4). Despite these seemingly accurate forecasts for Gold and Silver, something does not feel right to me here. Gold feels less bullish than I have been expecting (see my analysis of Gold on Page 4), and Silver feels less bearish.

For example, it is possible that we may have already seen the low in Silver. On Page 4 I observe that Silver is in a selling climax. But while I think the low has yet to be reached, there has already been some evidence of a selling climax.

Over the past several weeks there has been a huge build-up in Silver’s open interest, suggesting everybody who was ready to sell Silver has already gone short. Also, there was last week’s news event, namely, the Chapter 11 filing by Sunshine Mining, a major Silver producer. We did see some heavy selling on the day the bankruptcy was released, which again is typical of a bottom. Taken together, these events suggest that Silver’s low may have already been reached. This conclusion can also be observed from the accompanying chart. 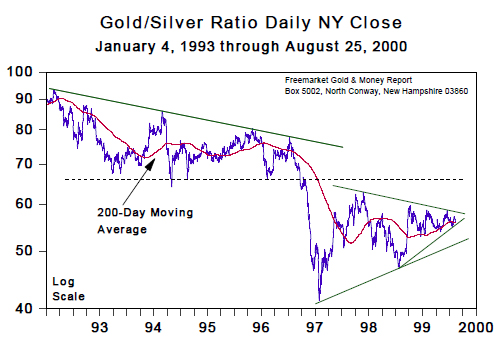 As readers know, I like to use the ratio of the two metals as an aid in my price forecasts. It is usually easier to get a clearer picture of their relative strength when looking at the ratio, than it is by looking at each metal chart individually. And right now, as one might reasonably infer from my comments above, this chart is weaker than I was expecting.

In other words, instead of rising back to and then moving above 60 as I expected, the ratio has continued to trade around 55-57. This result suggests that Silver has been performing better than I was expecting. So what does this all mean?

If Gold holds $270 and Silver does indeed eventually touch $4.40, their ratio will not exceed 62. But the above chart indicates that their ratio may not even jump that high.

Note that the ratio has formed a triangle pattern. This chart is open to interpretation, but it looks to me as if the ratio is nearly ready to break the steep 15-month uptrend, and move to the bottom of the triangle. If that occurs, I would expect the ratio to shortly thereafter break out from the triangle to the downside. It would mean that Silver will be substantially outperforming Gold (i.e., it will take fewer and fewer ounces of Silver to buy one ounce of Gold).

In summary, watch for clues that the low in Silver has already been reached. A New York close in the Silver price above $5.04 will probably be enough evidence that the reversal has taken place. And that reversal will in time probably move the ratio to 50. What does this ratio mean for the price of Gold and Silver? My initial upside targets for Gold and Silver are $325 and $6.50, which is a ratio of 50.