A Global Currency for Global Commerce

November 22, 1999 – “We assume that the currency which is in all our hands is fixed, and that the price of bullion moves; whereas in truth, it is the currency of each nation that moves, and it is bullion which is the more fixed.” – Henry Thornton, 1802

This quote from Henry Thornton’s wonderful book, An Enquiry into the Paper Credit of Great Britain, provides the reason that monetary systems have gone so wrong. We think in terms of currency, rather than Gold. Let me explain.

We are today wrestling with the same monetary matters that Britain was facing in the early 1800’s. To put that situation into perspective, the Napoleonic Wars were well underway. The Bank of England had suspended the redemption of paper money into Gold, and inflationary pressures were building. And Gold in any form had disappeared from circulation because it was worth more than the depreciated British currency, which was nominally still defined as a weight of Gold.

So the great minds of that day set out to answer some basic questions. Why were prices fluctuating? Why were the prices of goods and services rising? Henry Thornton came up with the answer that still rings true today.

Few people understood his answer when he first stated it, and today it is even harder to find anyone who understands – let alone appreciates – his insightful analysis. Back in 1802, at least everybody recognized that Gold was money, even if they did not understand the subtle changes that were occurring to the British currency at the time. But today, hardly anyone even recognizes that Gold is money, so conditioned have people become to the anti-Gold propagandists in government and their apologists in academia and banking.

According to officialdom, Gold supposedly has been demonetized by government – that it lost its monetary role and that as a consequence, Gold is not money. Of course, this conventional view is wrong, and the reason is simple. People, not governments, cause Gold to be money. And people do this because Gold is very useful in doing what money is supposed to do, which is to capably measure the price of some good or service. Money enables us to communicate value by choosing whether or not to purchase, or sell, some good or service in the marketplace. I call these tasks ‘economic calculation’. 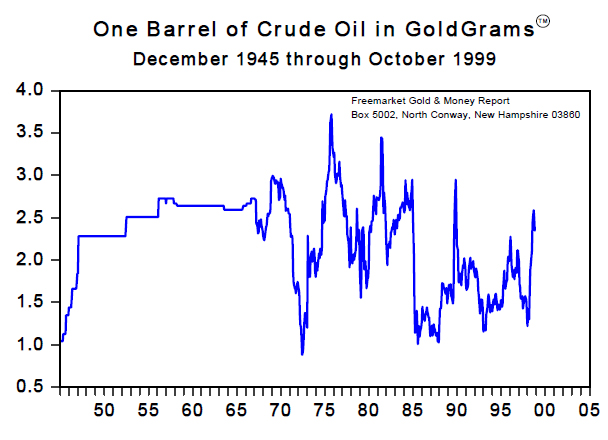 Now admittedly, there have been some fluctuations, both upand down, but these fluctuations are just a distraction to the big picture, which shows that over a 55-year sweep of history, the price of crude oil has been rising – in terms of US Dollars that is. This modifier – in terms of US Dollars – is needed because when you look at the price of crude oil in terms of GoldGrams you get an entirely different picture, as can be seen on the above chart.

The reality is that a barrel of crude oil today costs no more than it did in 1952, provided you measure the price of crude oil in units of Gold. In 1952 the price of one barrel of crude oil was 2.3 GoldGrams, the same price on October 31st, the last data point presented on this monthly chart. By this measure, nothing has changed. There has been no increase in the price of crude oil. Of course over these decades there have been price fluctuations. At moments crude oil was very cheap when it cost only about one GoldGram per barrel, which was well below the average price experienced over these 55-years. At other moments, crude oil was very expensive when it cost about 3.5 GoldGrams per barrel, which was well above the average price. But these price fluctuations occurred because of normal supply and demand, not because of monetary factors. Nothing in the real world is static, and we clearly see in this chart an example of that reality – prices fluctuate because of changes in supply and demand. But these changes self-correct.

As the price rises, demand declines, and supply tends to increase. These factors together limit the price rise, and then a new cycle begins. In this new cycle, prices fall until they become too cheap. When prices are too cheap, supply becomes limited because oil firms cannot make money at the low price so they cut back their production. At the same time, demand tends to be very strong because everyone recognizes that the price is very cheap, so they act as we would expect them to act – they buy more, perhaps substituting crude oil for other forms of more expensive energy. It is basic economics. Basic supply and demand factors are readily apparent when we perform economic calculation in terms of GoldGrams.

Thus, Thornton’s observation would be better understood if people performed economic calculation in terms of Gold as well as Dollars, and not just for crude oil. His observation applies to any good or service because it is the “the currency of each nation that moves”, meaning that they lose purchasing power from inflation and debasement.

The conclusion should be clear. Gold is money, but it seems logical to go even further than that. This analysis shows that Gold is much better money than the US Dollar. By preserving purchasing power over long periods of time, Gold makes economic calculation easy and insightful. Unfortunately, Gold no longer is currency.

Gold used to be currency when Gold coins circulated hand-to-hand, but no more. Gold has not circulated as currency for decades, but that is where GoldMoney.com comes in. I will say more about GoldMoney in a moment. But before I do, let me explain why Gold is the ideal currency for global commerce.

I have already made the first point explaining why Gold is the ideal currency for global commerce. Gold preserves purchasing power. The US Dollar does not even come close to meeting this important quality of Gold.

Some history may be useful here. For thousands of years, Gold has always been the center of international commerce. That role has changed only in the last fifty years. In the 1944 Bretton Woods Agreement, the Dollar and not Gold was made the center of global commerce, but let me quickly add, this placing of the Dollar at center stage only happened because the Dollar was tied to Gold, and defined as a precise weight of Gold. Had the Dollar not been so closely identified with Gold – “as good as Gold” was the saying they used back then – it is obvious that the Dollar would never have been placed in that important role in global commerce.

The Dollar stayed linked to Gold until 1971, so the present monetary regime is only twenty-eight years old. It is not much of a track record compared to Gold’s long history. And given that big rise in crude oil prices when measured in terms of Dollars, it is clear that even in this very short history as the currency of global commerce, the Dollar has failed to match the qualities of Gold. Let me just add one other observation from history to emphasize this point.

For the two hundred years when the British Pound Sterling served as the world’s global currency, one British Pound bought as much in 1914 as one Pound purchased in 1714. In other words, its purchasing power was not depreciated over two hundred years. This achievement again highlights the inferior performance of the Dollar in its very brief role as global currency, as a result of its steady and quick loss of purchasing power. But this loss of purchasing power is not the only problem with the Dollar. Another problem is payment risk, which is sometimes called Herstatt risk.

This name comes from a German bank that failed in the early 1970’s. Though a relatively small bank, it played a key role in facilitating international payments arising from trade and finance. When Herstatt Bank failed, it nearly brought down with it the international monetary system, and it no doubt worsened the 1973-1974 recession and near economic collapse experienced in the United States and many other economies throughout the world at the time.

Since the collapse of Herstatt Bank, all over the globe banks have been spending untold millions trying to eliminate Herstatt risk. But try as they might, they cannot eliminate this risk. They can at best only reduce this risk, but the risk remains nonetheless. It cannot be avoided – except when you use Gold.

Gold has no Herstatt risk, and the reason is simple. Gold is a tangible asset. When you pay for some product with a Gold coin, for example, something that has substance – the Gold coin – is being exchanged for something else of substance, namely, the good being purchased. With Gold, the exchange is extinguished, but contrast this result with the Dollar or any other national currency for that matter.

When the good is exchanged for Dollars, substance is being exchanged for a currency that has no substance. If you look at the balance sheet of a bank, you will see that the Dollars that circulate as currency are liabilities of banks. As any accountant knows, assets have substance, but liabilities do not. Therefore, when Dollars are used to purchase some good, the exchange is not extinguished. The seller of the good receiving Dollars does not extinguish the exchange until he off-loads those Dollars on to someone else in some other exchange for a good or service. This reality – that national currencies are liabilities – explains why Herstatt risk exists and cannot be avoided.

So is not Gold the ideal currency for global commerce? Why use Dollars in global commerce when Gold preserves purchasing power and avoids Herstatt risk?

To be fair, Gold does have some disadvantages. Gold is bulky. It takes time and effort to move large weights of Gold around when making large transfers of value, and there are other disadvantages as well. Together these factors provide some of the reason why Gold stopped circulating as currency. So Gold was not the ideal global currency, that is, until now. And here’s where GoldMoney.com, my Internet venture which I have been developing for several years, starts to come into the picture.

Gold still preserves purchasing power. Gold is still useful in economic calculation, provided we take the time to calculate prices in terms of GoldGrams. And even though we may not use Gold coins any longer, Gold is still the only money that avoids Herstatt risk. So these important qualities of Gold remain; they are just dormant. But perhaps for not much longer, if GoldMoney.com has anything to do about it.

GoldMoney is being built upon one basic premise. These unique and useful qualities of Gold can again be used in global commerce, but with a difference. We are witnessing a profound revolution in technology and global communications. These advancements make it possible to supersede all of those factors that have impeded Gold’s ability to circulate as currency in years gone by.

GoldMoney aims to use this new technology – and let me add that we have just been awarded our second US patent – to hurdle above and beyond the disadvantages that have impeded Gold’s usefulness as currency in the past. When it becomes operational next year, people around the world will have the opportunity to use Gold as currency. Thus, GoldMoney will enable Gold to fulfill its time honored and proven role as money and to establish, once and for all, that it is the ideal global currency for global commerce.