August 10, 2009 – Gold re-tested support as expected, but dropped further than I had planned for. As a result, some of our gold trading positions were stopped out.

The important point though is how quickly both metals turned higher after support held. The quickness and power of the bounce shows just how well positioned the metals are at the moment. Both are poised to move higher. I do not think, however, that gold and silver are ready for the upside break-out just yet.

We still need to give the market more time to fully develop support. As I noted in the last letter: “We should expect some ‘backing & filling’ for at least a week or two, and perhaps through most of August.” That advice still holds.

But as I also noted in the last letter, it is becoming increasingly likely that the lows for gold and silver are now behind us. Consequently, any retracements over the next few weeks toward underlying support will likely offer good opportunities to add to our trading positions.

Turning to the following gold chart, we can see that the “V” pattern continues to develop. Gold is inching ever closer to $1,000. 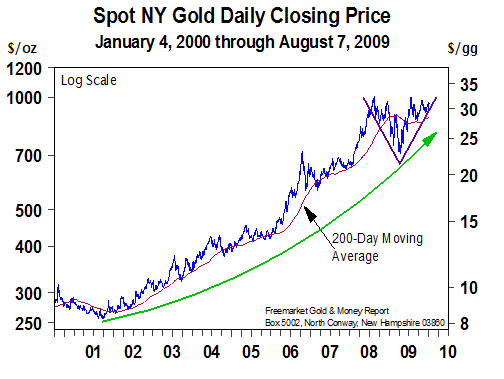 This “V” pattern as well as the ‘head & shoulders’ pattern forming within the “V” will be completed when gold finally breaks higher and successfully hurdles the $1,000 level. When will that be?

No one of course can predict the future, but we are getting close to the moment when $1,000 is finally hurdled once and for all. In other words, gold climbs and then stays above $1,000. This breakout could happen any time, and as readers know, I do expect that it will happen this year. The most likely timeframe though will be September or October, when seasonal buying usually enters the gold market.

When $1,000 is eventually hurdled, I expect gold to rocket higher. View this “V” pattern to be gold’s launch pad. The “V” pattern clearly illustrates the buying pressure that has been building for months.

In summary, this gold chart is a thing of beauty. We just need a little more patience for gold to fulfill what I believe to be its destiny, i.e., a much higher price.

I am not making a prediction when I say to expect a higher gold price. I see it simply as a matter of logic. The dollar is being debased by out-of-control federal spending and a central bank that is more intent in saving its controllers – the banks that own it – than preserving the purchasing power of the dollar. As a result, sooner or later gold will climb higher regardless of the gold cartel’s efforts to cap the price.

The gold cartel has managed to keep gold under $1,000 despite several attempts by gold to hurdle that level. So the gold cartel has won some battles, but they are losing the war as gold continues to climb more or less lock-step with the debasement of the dollar.

Therefore, watch this “V” and $1,000 carefully. When gold breaks above $1,000, all the buying pressure now building up will be unleashed, launching what I expect will be a spectacular gold rocket-shot.