August 10, 2009 – The chart of the gold/silver ratio is unfolding just as expected. 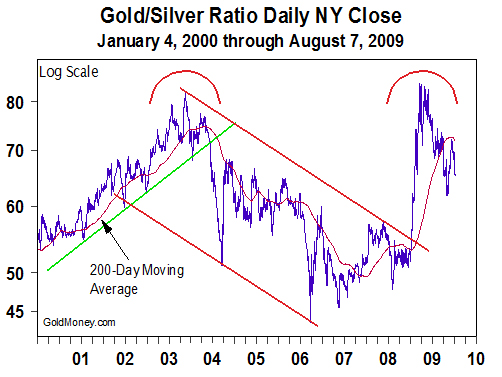 We can now expect another bounce in the ratio back toward the 70 area. It may even climb back to its 200-day moving average, currently at 71.9, though I consider that possibility to be very low – less than 20%.

The overall look of this chart has become even more bearish. First and foremost is the double-top in the low 80s. Also, the downtrend in the ratio that has formed since making the second top is now better developed. It is therefore becoming more pronounced – and more bearish.

In the last letter I said: “I recommend watching the ratio carefully here. If it breaks convincingly below 69, it will be an early warning signal that the next up-leg in the precious metals has begun.” I do not think that we have yet met that criteria.

The ratio has fallen below 69, but we need more work under that key level. So expect some ‘backing & filling’ between that level and the current level around 65.