July 27, 2009 – Over the past couple of months there have been several particularly bearish articles on MineWeb.com about gold mining in South Africa. One entitled “South African gold output in downward spiral” appeared on May 26th and notes that South Africa’s gold output “continues to fall as mines get older and grades decline.” (www.mineweb.com)

Indeed, it is likely that the strong rand, which has risen 17.9% against the US dollar and 14.7% against the euro so far this year, will have a negative impact on the earnings of mining companies. While gold has risen 7.8% this year in terms of dollars, it is down -10.1% in terms of the rand.

Nearly all input costs of SA mining companies are rand denominated, with very little material imported. Consequently, the mining companies do not benefit from the strong rand, and can indeed expect margins to be squeezed until the gold price begins rising again, which brings me to the following chart. 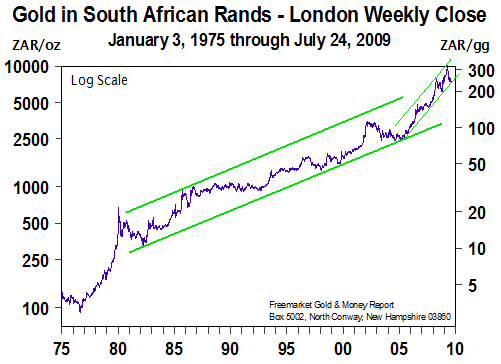 The gold price in terms of rand has been in a general uptrend for decades. Then a few years ago, the uptrend began to accelerate – note the recent uptrend channel on the chart with the sharp ascent. But also note that after peaking at ZAR 320k per kilo earlier this year on gold’s last foray to $1,000 per ounce, the rand price of gold has fallen. It is now about ZAR 228k per kilo, but importantly, it now rests on the bottom line of the uptrend channel. Will this new uptrend channel hold?

Thus, both of the above articles have elements of truth to them. South Africa’s mines are indeed old, and grades have generally been in decline. And after being the world’s largest gold miner for nearly all of the 20th century, South African production has recently fallen to third place after China and the USA. This downtrend in production can be expected to continue.

Given the beating the gold price has taken in rand so far this year, it is not surprising that bearish articles have appeared. However, the trend of several months should not be used to make conclusions about the trend of several decades. There have been other difficult moments for the South African mining industry, but as the above chart shows, the gold price inevitably climbs higher – and the mining companies continue to operate.

Consequently, I wish to take aim at another article that appeared on MineWeb.com last week, which concludes that South African gold mining is in what it characterizes to be a permanent state of decline. It is entitled “What do we do when the mines stop?” It concludes that “South Africa’s gold mines are old and there doesn’t seem to be a successor on the horizon.” (www.mineweb.com)

In my view one can only take a bearish view on gold mining in South Africa if one is bearish on gold. About 50,000 tonnes of gold, which is nearly one-third of the world’s aboveground gold stock of 160,000 tonnes, has been mined in South Africa. Nevertheless, another 40,000 tonnes – perhaps even more – remains underground.

To reach this gold, mines are going deeper, which does pose problems. As MineWeb puts it, “most of the easy-to-access gold has been dug up.” But examine this statement closely. The same thing was also true 100 years ago, 50 years ago and even a decade ago. The easy-to-access gold is always mined first. What changes is mining technology, and mining now at 3 kilometers depth is no greater hurdle than mining 100 years ago at several hundred meters depth. New technologies continue to move the bar forward in all human endeavors, including mining.

Mining is a capital intensive industry and MineWeb is correct to point out that South African mines have been adversely impacted by “a burdensome regulatory regime that has also depressed investment.” While this observation has a ring of truth, it is not the heart of the matter.

Capital flows to where it can generate the best return relative to known risks. In recent decades, capital has indeed moved to South Africa. It continues to move there, and in part explains the exceptional strength of the rand. So the South African mining industry is not in decline because of the lack of capital or even a burdensome regulatory regime. There is a bigger issue here.

Gold is undervalued. South Africa needs a gold price that is fairly valued. Given the importance of gold mining to South Africa’s economy, the country more than others has been particularly hard hit by the ongoing gold price suppression scheme.

Eventually the gold price suppression scheme will end. In fact, that moment is probably near, and the gold price will rise even in rand terms as a result. The impact on South Africa will be considerable, and South Africa should do all it can to hasten that day. Recently it made an important step in that direction.

Since 1911, South Africans have been unable to own any physical gold – except Krugerrands. Last month the South African parliament removed that restriction. Commodity Online reports that the reaction has been swift, with a “surge in bullion demand”, which highlights how the gold price suppression scheme will end. Central banks will not be able to meet the demand for physical bullion. There are simply too many paper claims to the available stock of physical gold.

When the end of the gold price suppression scheme comes, it will be a welcome relief for South Africa. The higher gold price will mean not only better margins for the mines, but new opportunities to invest in South Africa’s vast gold potential.