June 9, 1997 – Anyone who has been around Gold for any length of time knows that this precious metal has the uncanny ability to lead events. For example, Gold was in a well established downtrend in the months leading up to the Gulf War. However, sensing trouble on the horizon, Gold hit bottom two months before the war began. Gold had already risen nearly 10% from its low point by the time Saddam Hussein’s tanks rolled across the Kuwaiti border. Gold continued to plow higher as the Iraqi’s settled into their new locale.

Gold’s ability to forecast future events is not hard to understand. Saddam Hussein had been bellowing long and hard about Iraq’s claim to Kuwaiti territory for a considerable time before he ordered his troops to attack Kuwait. As his threats became more urgent, people in the region and elsewhere sensed from this clamor that there may be trouble that could threaten Western oil supplies, so they responded. They bought Gold, and the cumulative effect of their action caused Gold to reverse course to the upside well before the war broke out. The rise in Gold was a leading event.

There are many examples of Gold’s forecasting ability. For example, Gold began its major downtrend in January 1980, long before the majority of the population recognized or were willing to accept that the inflationary outlook for the Dollar was about to change course. By the time the double-digit inflation rates of that period had subsided, Gold was well below its highest price and firmly established within the major downtrend that carried it to the 1985 low of $282 per ounce.

Given this exceptional forecasting record, Gold must be looked at seriously whenever it reverses course. Any change is probably signaling some major event, not yet widely recognized but sufficiently menacing to cause enough people to act, taking steps favorable to them with the most fundamental money, namely, Gold.

Therefore, the following chart cannot be ignored. Is Gold signaling a severe bout of deflation? 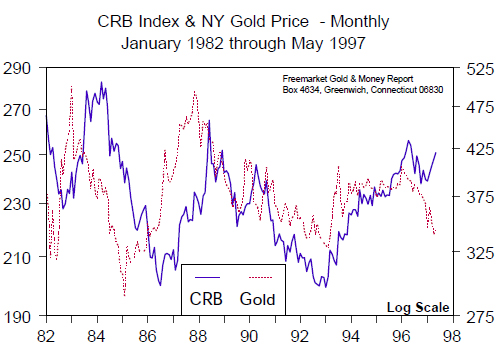 This chart presents the Gold price and the Commodity Research Bureau Index, which is an amalgam of 17 different and very important commodities. Rising commodity prices are an indication of inflation. Conversely, falling commodity prices are an indication of disinflation, or if the downtrend is severe and protracted enough, perhaps even deflation. For this reason, I watch the CRB Index very closely. But I watch Gold even more. The reason is that the Gold price leads the CRB Index. Look at their pattern on the accompanying chart.

Gold began a new uptrend in 1982; the CRB Index reversed course later that year and followed Gold’s lead. Gold then started turning lower in 1983, with the CRB following it down after several months. Gold bottomed in 1985 about one year before the CRB. Then Gold topped out in 1987, again months before the CRB, and after that both were in a multi-year downtrend. The picture in the early 1990’s is less clear, but the historical relationship nevertheless still holds. Gold’s decline began losing momentum before the CRB showed any sign of approaching a bottom. Gold’s big 1993 rally led the rally in the CRB, which continued higher throughout 1994. But then things changed, and it is this change that forces me to ask whether Gold is still leading.

Look at what has happened to the Gold/CRB relationship over the past few years. The CRB has kept climbing, but Gold’s advance stalled in 1994 and 1995 and then abruptly reversed course to the downside last year. Therefore, is Gold still leading the CRB? If Gold is leading, does a deflationary spiral loom on the horizon?

No, I don’t think so. Notwithstanding their clear historical relationship, Gold is no longer leading – the CRB is. For the past year or so, Gold has been going its own way for reasons unique to it. Gold has been responding to two factors affecting its supply – forward selling by the mining companies and dishoarding by the central banks. These two factors of supply were not an issue until recent years, but now they have become so important that thehistorical relationship of the Gold price and the CRB Index has changed as a result.

The commodities comprising the CRB are not affected by the unique supply factors impacting the Gold price. There are no central banks dishoarding soybeans. No oil company is forward selling today crude oil they hope to produce in 2005. Therefore, the CRB Index – and not the Gold price – is telling the true story about the monetary reflation now underway worldwide. 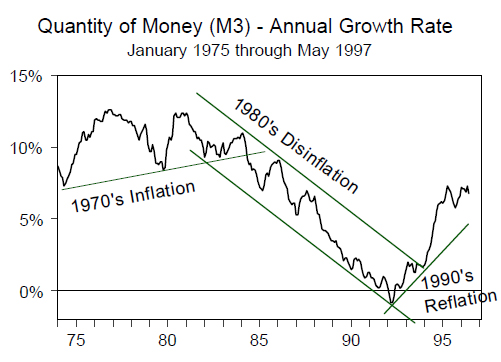 Since 1992 the Federal Reserve and most every other central bank around the world has been pumping up the money supply. If you create too many Dollars, you get inflation. The 1970’s had double-digit inflation rates because M3 was growing at double-digit rates. We had disinflation in the 1980’s and early 1990’s because monetary growth was slowing. In fact, for a short time in 1992, there was deflation because of the year-on-year decline in the stock of Dollars.

Since then, reflation has been the modus operandi of the Federal Reserve. The persistent expansion of M3 since 1992 has been phenomenal. Reflationary action by a central bank comes first; higher prices (i.e., inflation) follow.

Is it any wonder that the CRB Index has been in an uptrend since 1992? Commodity prices are rising because the money supply is being pumped up; the Dollar is being debased by excessive money creation.

This debasement of the Dollar means that each Dollar over time is purchasing less and less. And this reflation by the Federal Reserve means that there is a lot of inflationary pressure in the pipeline. Commodity prices are rising. Wage rates are rising. And so should the Gold price be rising too.

But we know why it isn’t. Gold has had to contend with two unusual factors that resulted in abnormal increases in its supply. As a result, Gold today is $345, instead of the $475-$500 range that I believe it would now be if its historical relationship with the CRB Index were still prevailing.

This observation is not a reason to avoid Gold, Rather, it is a reason to buy it. Gold is very undervalued, and eventually, this undervaluation will disappear. Why?

Because all markets eventually move from undervaluation to full valuation, and then to overvaluation. Gold is no different in this regard from the stock market or any other market. It is only a matter of time before any market begins fulfilling its potential, and that time may be near for Gold.

The French election may prove to be a turning point for the Gold market. Though I have been a Euro-skeptic all along and never thought monetary union in Europe was going to happen, most investors seemed to accept the Euro as a fait accompli.

Consequently, the French election and the bungled effort by the German government to ‘cook the books’ by revaluing their Gold reserve may be the wake-up call many people needed about the slim prospects for monetary union. These two events make it clear that monetary union is further away now then it ever was.

Consequently, Europe’s politicians must think twice before playing fast and loose in the rush to dump their national currency for an untested Euro. And the various European central banks therefore no longer have any incentive to dishoard their Gold reserve. Take this factor of supply out of the market, and the Gold price will respond. And my expectation is that it will respond quickly – higher prices are on the way.

The Gold price is about to catch-up with the inflationary message of the CRB Index. And who knows? Maybe Gold will once again start leading, signaling to all those willing to heed its message that the reflation of recent years is inevitably leading to a resurgence in inflation.