Is the Gold Price Being Managed?

March 15, 2005 – On March 10th GATA (www.gata.org) issued a press release that presented an analysis of the gold market prepared by Dan Norcini, a futures trader based in Houston, Texas. Observing that the Commodity Research Bureau (CRB) Index – which is composed of seventeen different commodities important to economic activity – had just reached a new 24-year high, Norcini noted that gold was not keeping up with the rise in commodity prices.

To provide evidence supporting his observation, Norcini compared 1980 monthly closing levels of the CRB Index with the monthly closing gold price prevailing at the time. From July 1980 to January 1981 was the only time prior to this year when the CRB Index traded above 300. These results are presented in the accompanying table, which appeared in the GATA release.

GATA observed: “With the CRB Index where it is today …the price history of the last boom in commodities suggests that gold now should be priced between $591 and $647 per ounce — and that does not adjust for the dollar’s loss of purchasing power in the last 25 years.”

Their press release then pertinently concludes: “Gold’s failure to keep up with exploding commodity prices, as it did during the last commodities boom in 1980, is more powerful evidence of surreptitious intervention by central banks in the gold market.”

It is a conclusion to which I wholeheartedly agree, and I would like to expand upon Norcini’s observations by presenting the relationship between gold and the CRB Index since 1980. My objective is to provide additional analysis that will bolster Norcini’s and GATA’s work, by making available more evidence that the gold price is indeed being managed, the net result of which is preventing gold from achieving its natural market price.

It will be useful to start with some brief background information. Gold is a unique commodity because it alone is the only commodity produced for accumulation. Every other commodity is produced for consumption. We eat corn, and our cars burn gasoline. Copper is consumed in the sense that it is dispersed in countless applications throughout the world. Even silver is consumed, to the extent that it is used in irretrievable photographic processes. But gold is not consumed; it is hoarded. For this reason, gold’s utility does not arise like other commodities from innate attributes and uses related to their consumption, but rather, gold’s usefulness arises from the fact that it is not consumed. In other words, because it is hoarded, gold is a store of value, which means that gold is money. 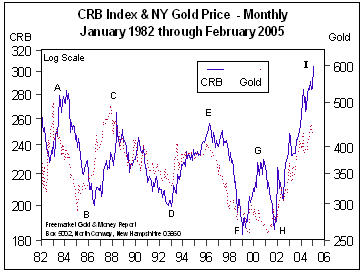 This chart presents both the month-end CRB Index and the spot New York gold price since January 1982. It’s a dual scale chart, with gold’s price on the right-hand scale and the CRB Index on the left.

In the first years of this chart, the relationship between the CRB and gold is clear. Gold is leading the CRB both to the upside and downside (points A, B and C), which is the result to be expected. However, by the early 1990’s their relationship changed significantly – gold was now lagging the CRB (note points D, E and F).

Point E is also noteworthy because gold’s rise lagged that of the CRB Index. In other words, it appears that gold’s advance in 1996 should have been much higher than the $405 price achieved, providing a substantial clue that the gold price was being managed to prevent gold from reaching its natural price level.

Further support for this conclusion comes from point G. Note that the CRB rose without any meaningful rise in the gold price. The results since then also lend credence to the argument that the gold price is being managed.

Note how the gold price has been lagging since point H – rather than leading – the CRB Index. Even though gold, as to be expected, bottomed in 2001 before the CRB, the CRB quickly began climbing more rapidly than gold, exactly the opposite experience of the advances leading to points A and C.
What’s more, note the disparity at point I. The above chart completely supports GATA’s conclusion “that gold now should be priced between $591 and $647 per ounce.” Gold is well below the level already achieved by the CRB, clearly indicating – just as GATA concluded – that someone is trying to cap gold’s ascent.

Further evidence of this price capping is provided by John Brimelow (www.johnbrimelow.com) in his March 10th market review. He states: “In the last twelve business days, gold has risen $15.80 (3.6%) and [Comex] open interest has gone up 38,393 contracts, 14.7% or 120.66 tonnes. In essence, something funny has happened to the gold market. And clearly, as the open interest surge demonstrates, a large seller is currently preventing gold from joining the general commodity party.”

A “large seller” indeed. As Norcini puts it: “Anyone who has the least bit of market understanding would have to ask who it is that sells in such a fashion and WHY?” And who could that large seller be other than a central bank? No profit-maximizing investor or trader would take the undue risk of selling gold in the manner described by Brimelow and at these levels given gold’s undervaluation compared to other commodities, as measured by the CRB Index. So it is logical to point the finger at central banks, as they do not exist to maximize profits. We know they exist to thwart and impede the free-market process through their ongoing interventions, whether furtive and not disclosed or open and announced, which brings us back full circle to the important difference between gold and all other commodities.

Central banks don’t hold soybeans, cocoa, copper or any other commodity. So central banks have no ammunition to keep the CRB Index from rising, but they do have a hoard of gold to use in market interventions. Thus, they no longer use that gold in its rightful and historical role as a reserve for the paper currency they issue. Instead, they see gold as a tool, which they combine with their incessant jawboning aimed at talking down the gold price, to add some occasional punch to what they mouth. They take some of their physical metal, but only as little as possible because their hoard is finite, and sell or lend it into the market. Then to maximize the impact of these occasional sales of physical metal, they sell through their intermediaries as much paper-gold (for example, Comex futures contracts) as the market will bear. So as Brimelow points out, Comex open interest boomed, while gold itself showed relatively little price appreciation.

So, are these reasons to be bearish about gold’s prospects? Far from it. The net result of these central bank actions explains why I am so bullish on gold.

Central banks have created a wonderful opportunity for everyone who understands gold. Their interventions have made gold exceptionally undervalued. Relatively speaking, it is the cheapest commodity available for purchase, which is the flip-side of the analysis presented by GATA, Norcini and me. With all their might central banks are trying to stop gold’s rise, but they are losing the war. All they have managed to do is to make gold very cheap, and very undervalued. In the final analysis, central banks are big and powerful, but they are not more powerful than the market, i.e., you and me and everyone else who values gold.

Gold has risen three years in a row, and is well poised for year number four. The flight out of the dollar – as I have been forecasting for three years now and as I have explained in my book, The Coming Collapse of the Dollar – is accelerating. Even the central banks recognize it, which explains why some of them have broken ranks. They are fleeing a sinking ship. China, Japan, Korea, and most recently, India, are talking about diversifying their reserves out of the dollar, or have already begun reducing the percentage of dollars they hold.

This trend toward a declining demand for dollars by central banks as well as other dollar holders will continue. In fact, assume this trend will accelerate in the months immediately ahead, putting ever-greater pressure on those central banks trying to keep a lid on the gold price. Their ranks are thinning; their hoard of gold is being used up at unsustainably low gold prices. And more people are learning to value and appreciate gold.

As a consequence, we are approaching – and may already be at – the tipping point. It is that point when this ghastly central bank scheme of managing the gold price to try making the dollar look worthy of being the world’s reserve currency, when in fact it’s not, comes to an end. When it does, the dollar will collapse, and gold will soar, simply extending to their logical conclusion two key trends that have already begun.