The Key to Silver’s Next Big Move

Feb 10, 2006 – In my previous alerts I explained that precious metal bull markets “are caused by people looking for a safe haven from national currency”. I went on to note that during these bull markets, this “rising monetary demand on the margin will have a greater positive impact on silver than on gold”. In other words, during precious metal bull markets it takes a declining number of ounces of silver to buy one ounce of gold. This relationship can be seen from the gold/silver ratio.

The gold/silver ratio rises during precious metal bear markets, and falls during bull markets. The ratio has been in a long-term downtrend since reaching its high of 101.8 on February 22nd, 1991.

The following chart presents the ratio’s daily value since 1995. It shows the number of silver ounces needed to purchase one gold ounce. 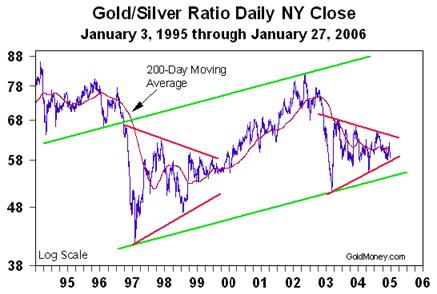 1.The ratio dropped precipitously from mid-1997 to early 1998. This was the period and the immediate aftermath of Warren Buffett’s huge 130 million ounce silver purchase.

2. After reaching 41.3 on February 5th, 1998, the ratio began a correction. The ratio formed a pennant (red lines) from 1997 to 2000, but broke out of this pennant to the upside. This counter-trend breakout showed weakness, and therefore indicated a need for further consolidation.

3. This additional consolidation occurred within the uptrend channel marked by the green lines.

4. Note that the ratio thereafter retraced all the way back to the level it was trading before Mr. Buffett’s purchase. This test of overhead resistance was successful, and the ratio began falling once again.

5. The sharp drop in the ratio in early 2003 was similar to the drop which occurred during Mr. Buffett’s purchase six years earlier. Note too that I have drawn a parallel trend channel (green lines) marking these two important low points as well as the key overhead resistance levels.

6. Since 2003, the ratio has formed another pennant formation. The ratio has been consolidating the big 2003 decline.

The important question now is: will the ratio break-out of this pennant to the downside?

We’ll find out soon enough, but I expect the ratio to break out from the pennant to the downside. Note how the ratio is back below its 200-day moving average. This chart has a bearish appearance, i.e., the ratio looks ready to fall, which of course is bullish for the precious metals. A falling ratio means that silver is outperforming gold, which is what we normally see in precious metal bull markets. Both gold and silver will climb higher, but a falling ratio will mean that silver is climbing faster.

What’s more, shortly after the downside break-out from the pennant occurs, I also expect the ratio to break-out to the downside from the rising trend channel. If that occurs, then the picture will be very bullish indeed.