June 25, 2001 – When we look at recent and current economic and financial activity within the United States, it seems very logical to ask why is the dollar so strong? After all, factors that both logic and past experience say should have weakened the dollar have had little or no affect on the dollar’s exchange rate to other major currencies of the world because the dollar has remained relatively strong.

For more than a year the US has been running a monthly trade deficit of around $30 billion. Therefore, the US has been putting dollars in overseas hands at an unbelievable and alarming annual rate of approximately $360 billion. Clearly, the US is very efficient in importing goods and services and exporting dollar IOU’s to pay for them, but in the past, there were limits as to how many dollars overseas holders would accept.

During past surges in the deficits of the US trade account, the rapid creation of foreign obligations flooded the market with increasingly unwanted dollars, which eventually caused the dollar to drop against the major foreign currencies. But not now. The demand for the US greenback seems insatiable. What factors explain this phenomenal demand for dollars?

I think the answer is simple. Compared to the other currency alternatives out there, the dollar does not compare unfavorably. A quick walk-around-the-world shows that there are a lot of currencies in much worse shape, including those of most of the major industrialized countries.

Starting this quick review in Asia, and Japan in particular, it is easy to rule out the yen as one’s preferred currency choice. In fact, as readers know, the yen has been my major short sale currency candidate, and a target of ¥170 or lower remains my long-term (probably two years, but perhaps less) target. Aside from their economic troubles, the Japanese banking system is still in dire straits, thereby making the yen one of the most risky currencies to hold. What’s more, Japanese interest rates are near zero, so the possibility of earning some meaningful interest income relative to those risks just does not exist.

As bad as the yen is, it looks good compared to many of the other currencies in Asia. South East Asia continues to walk a tightrope after the economic and currency turmoil from a few years ago. These ongoing problems are causing people in places like Thailand and Indonesia to look for alternatives outside their region. Even the Australian dollar is a basket-case, having lost nearly 20% of its exchange value against the US dollar in just the past year or so. It has dropped for pretty much the same reasons as the Canadian dollar – these resource rich countries have been hurt by low commodity prices.

Heading west from Asia, we can skip Africa. The only credible currency there in the past has been the South African Rand, but it has lost nearly 40% of its value against the US dollar in the past three years. So its position is not much better – and in some respects is worse – than Latin America, which we all know has historically offered some of the world’s worst currencies. One cannot prudently hold any wealth in the currencies of Latin American countries.

Hopping across the Atlantic to Great Britain does not offer a good currency choice. Readers know that after the yen, the pound is my second choice for the best long-term short sale candidate. I mentioned the pound in the last letter and discussed its present weakness, after which the pound fell to new 15-year lows against the US dollar. The prospects for the pound remain bleak, particularly after the recent election there, which makes it likely that Britain will continue to move toward adopting the euro.

And what about continental Europe, and the new euro? What can one say about the prospects for the euro? Well, I’ve just returned from a trip to Europe, and I think some advice offered while I was there by Sir Edward George, governor of the Bank of England is telling. According to the June 16th Financial Times, he says that if you want the euro to recover, then “pray.” I kid you not. According to the FT, Mr. George said: “If you believe in the power of prayer, you will join me this evening in praying for the euro to recover.”

His comment reminds me of an interesting and relevant anecdote. The words “In God we trust” were only added to the US dollar after the Federal Reserve was established and began issuing paper currency. You won’t find the words “In God we trust” on US dollar Gold Certificates, the principal paper currency that circulated before the creation of the Fed. So maybe Mr. George’s prayers should be said for all fiat currencies. 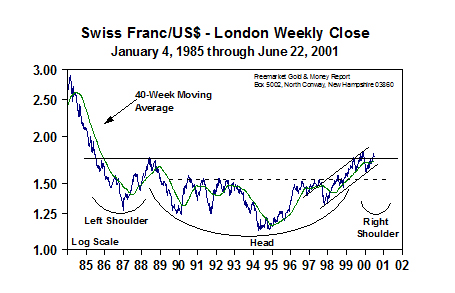 In any case, we have covered the world except for one major currency, the Swiss franc. And here I would like to refer to the above chart, which presents the Swiss franc’s rate of exchange against the US dollar.

I’d like to make a number of points about this chart. We can see the dollar’s bull market since 1995, which corresponds with Robert Rubin’s appointment as Treasury Secretary. But as strong as the dollar has been, this chart puts this so-called ‘strength’ into perspective. The dollar is still just a shadow of its former self.

In 1985 it took SFr 2.90 to purchase a dollar, compared to about SFr 1.76 at present. This comparison looks even more unfavorable for the dollar if we were to go back to their exchange rates in the 1960’s, when the debasement of the dollar began picking up speed. In any case, it is clear that the so-called ‘bull market’ of the dollar in recent years can perhaps be better described as a bear market rally.

I’ve drawn on the Page 1 chart what I think may yet develop into a major head-and-shoulder reversal pattern, which if it forms as I expect, has negative long-term implications for the Swiss franc. But I want to focus more precisely on the pattern in the last couple of years. I have recently taken a bullish stance on the Swiss franc because of the pattern that has been developing.

We can see that the franc has been in an uptrend channel for the past few years. When it previously touched the horizontal line (the neckline of the head & shoulders pattern), the franc dropped (in other words it rallied/strengthened because it took fewer francs to purchase a dollar). Then over the past few months the franc has climbed back up to its over-head resistance level, where it now sits. Therefore, what’s next for the franc?

I believe that for now over-head resistance will hold, and that as a consequence, the franc will strengthen from here. That the dollar could not make a new high on its last surge is an indication that its trend is reversing. Therefore, expect the dollar to reverse course at anytime within the next several weeks, with the franc rallying as a result. The target for the franc is the right shoulder that I have placed on the chart, which is the SFr 1.30-1.20 area.

In summary, there are many reasons not to hold the US dollar, but as we have seen, there are just as many reasons – and perhaps even more in some cases – not to hold the currency of other countries as well. All national currencies impose risks on the holders of those currencies, but for now, most of the world has opted for the US dollar. It is the ‘last man standing’ in a world flooded with fiat currency, which begs the question why hold fiat currency in the first place?

There is a worthwhile and sensible alternative, namely gold, and specifically GoldGrams. Given the relative risks and the potential rewards, GoldGrams are the safe way to go for now for your core currency holding, namely, that money for which you need for liquidity and with which want to take little risk.