Look At This Chart!

October 18, 1999 – The accompanying chart of the Gold price in terms of Deutschemarks is absolutely and completely breathtaking for anyone interested in the price of Gold. A truly long awaited event has just occurred. 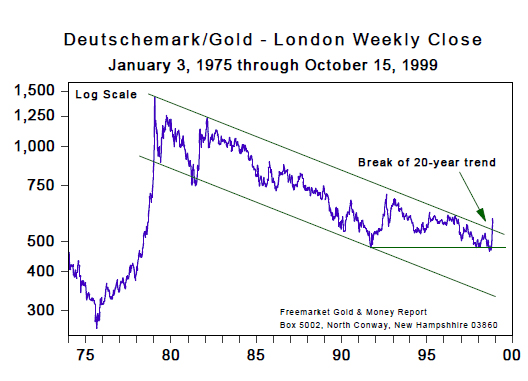 THE DOWNTREND LINE GOING BACK TO THE JANUARY 1980 HIGH HAS BEEN BROKEN. A near 20-year old trend line has been bettered. This important milestone has repercussions not just for my European subscribers, but for everyone else as well.

The 20-year trend of the Deutschemark has changed. The Deutschemark – long considered to be one of the soundest of all national currencies – is losing purchasing power when compared to Gold. The tide has turned. Therefore, the breaking of this major downtrend indicates that investors are now better-off holding Gold than Deutschemarks.

The odds suggest that from now on, it’s the Deutschemark down, and Gold up as far as their relative purchasing power is concerned. The same conclusion is probably true for the Swiss Franc as well.

The price of Gold in Swiss Francs has also broken through its downtrend line, but not as forcefully. And it has now slipped back below this key downtrend line, albeit by only a few Swiss Francs. But not against the Deutschemark, as the Gold price remains well above the downtrend line and the break-out point, as can be seen on the accompanying chart.

Note also the horizontal line on the chart. It’s there for a purpose.

In recent letters (particularly in Interim Letter #249a dated August 17th) I have been talking about a bear trap in the Dollar price of Gold. In a bear trap, investors sell thinking that Gold is ready to head lower. A bear trap is opened when an important and long-standing support zone is tested and then fails, carrying the price to a new multi-year low in the midst of a barrage of publicity and media hype. In addition to bringing a lot of attention to the market, the news reports raise the level of fear and therefore create the opportunity to catch a lot of investors in the trap.

However, instead of continuing lower, the price soon reverses back up over the just failed support line, thereby snapping closed the bear trap. The rising Gold price traps the would-be bears who dumped their metal on the break into new low prices. The newly formed bears are then forced into the rather unpleasant situation of buying their metal back at a higher price, or perhaps what is even a worse alternative, standing on the sidelines watching the price head higher without them being onboard.

The bear trap in the Dollar price of Gold occurred when $270 was broken in the weeks after the Bank of England auction. The price of Gold fell to 20-year lows, with a lot of publicity and media coverage. It was a great opportunity for a bear trap, and judging from the high volumes we saw back then, apparently many investors fell into it. Interestingly, investors who measure their portfolio in terms of Deutschemarks also got trapped.

A bear trap occurred when the Gold price broke below Dm 480 per ounce, and made a new 20-year low in terms of Deutschemarks. From July until September 1999, the price of Gold traded below this important Dm 480 support level (horizontal line on the chart), which had held on several previous tests over the years. In September Gold moved back above Dm 480 and the trap was set. Gold is now at Dm 570 per ounce.

Similar events have now occurred in terms of all the major currencies. As is the case between the Deutschemark and the Swiss Franc, there have been some variations in Gold’s relative performance because the currencies themselves have been fluctuating against one another. But the important point is that people all over the world have been caught in the bear trap, and the reaction of the Gold price once the trap was closed has been violent. Not only has the price jumped in one of the biggest surges in recent times, but now the price of Gold in terms of Deutschemarks has broken above its 20-year downtrend. It is a momentous event, and is more evidence that what we are now witnessing is not just a bear market rally. Rather, we have begun what I expect will be a rip-snorting, multi-year bull market.

Gold is above its 200-day moving average in terms of all the world’s major currencies. Gold is also in uptrends against all of the currencies. It’s a Gold bull market. Gold is winning, and national currencies are losing. Look for Gold to head higher.