September 9, 1996 – Since May I have been warning that stocks may be topping out. Our attention was first focused on the NASDAQ, which took a nasty spill in June that turned into a ferocious rout by early July, and a 19.6% correction from peak to trough. Even though the NASDAQ has had a good bounce, it is still almost 10% below the 1254 peak.

Last week’s dramatic volatility is just the latest sign that the bullish and bearish forces are pulling in either direction with seemingly unprecedented force. As if the added volatility were not enough to worry about, there is another warning sign, and this one could be fatal – interest rates appear ready to ratchet higher.

Further signs of inflationary pressure in the economy have sent T-Bonds reeling. Moreover, the market now expects the Federal Reserve to raise interest rates at least ¼% at its September 24th meeting. Some observers have even suggested that rates could go up by the end of this week if the Producer Price Index and Consumer Price Index reported on Thursday and Friday show unusually high increases.

Further interest rates increases will undoubtedly rattle the stock market, and for good reason. By any historical measure, stocks are very expensive and overvalued. However, they have gotten this way partly on the expectation that the economy would continue to experience modest, non-inflationary growth in a low interest rate environment. Therefore, low interest rates have distorted investor expectations, and consequently, money has not been pulled out of the stock market looking for high yields. That basic factor underpinning the stock market may be about to change. Study very closely the following chart, which is scratching out a major ‘head & shoulders’ bottom. 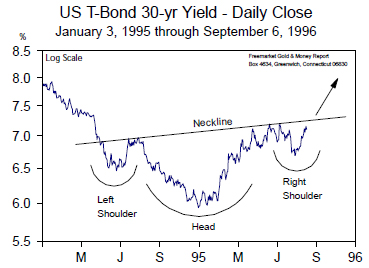 I last presented this chart in May. I suggested at that time that a ‘head and shoulders’ pattern often forms at major turning points in the T-Bond.

Clearly, this pattern was not as fully developed back in May. In fact, the right shoulder hadn’t even begun to form, and I only suggested this pattern would emerge as the most likely outcome.

There was enough evidence back then to suggest that an important turning point was at hand because of resurgent inflationary pressures, at that time seen mainly in higher commodity prices.

Commodity prices remain strong. For example, crude oil is over $23 a barrel, and the prices of the grains continue to act as if they want to go higher. But now there is other bad news about inflation as well.

While wage pressures back in May were subdued, it is clear that pernicious inflation already working its way through the economy from years of easy monetary conditions is now affecting wage rates as well. Last Friday’s unemployment report showed another strong gain in hourly wages, which are now increasing about 3.8% per annum, well above the 2% level they had been running for the past few years.

The bottom line is that rising interest rates – which seem inevitable as a result of the inflationary pressures already within the pipeline – will create a new monetary, financial and investment environment. Moreover, it seems safe to say that this new environment will not be one which is favorable to owning stocks.

Watch bond yields, while keeping a close eye on the accompanying chart. I have placed an arrow forecasting where I think yields are headed over the next few months, but only time will tell whether that forecast is accurate. In the meantime, there is an important level to watch.

If yields begin moving above 7.25%, breaking through the neckline of the ‘head and shoulders’ bottom, the odds improve that my forecast for interest rates will be accurate. In that case, the outlook for interest rates and the stock market will take a dramatic turn for the worse.