More Evidence That Gold Is Cheap

July 26, 1999 – In Letter No. 246, ‘Is Gold Cheap and therefore Good Value?’, I presented a detailed case that Gold is cheap and good value, and that it should therefore be accumulated. My analysis and conclusions resulted in many questions and comments from readers, which I would like to address. In doing so, I hope to further clarify and reinforce my argument that Gold is indeed exceptionally good value.

Q. What is the real price of Gold?

Some readers actually asked what really is the real price of Gold. I had argued that it is difficult to measure the Dollar’s purchasing power because of inflation and debasement,so these readers were making the point that is very difficult to measure the real price of Gold. To address this question, it is first necessary to explain the shortcomings of the so-called real price. The real price is an attempt to measure the changes in the purchasing power of the Dollar. And these changes are generally measured against a basket of consumer items, such as those used to measure the Consumer Price Index. However, the CPI basket is just a generalized collection of items, few of which may pertain to your cost of living. For example, as a non-smoker, I don’t care a whit about changes in cigarette prices. Nevertheless, even with its shortcomings, the CPI is widely used to capture the changes in the purchasing power of the Dollar over time.

Don McLaughlin, the Chairman of Homestake Mining in the 1960’s and 1970’s, used to say that Gold is the price. It is an accurate statement, if you believe as he did (and I do) that Gold is money, in which case, ounces of Gold can be used for economic calculation. For example, we generally measure the price of crude oil in Dollars, but oil can also be measured in ounces.

In May 1973, which is after the US government abandoned the Gold Standard but before OPEC made the force of its pricing cartel felt, one ounce of Gold purchased 35.4 barrels of crude oil. In contrast, after the big drop in Gold in the mid-1970’s, by September 1976 one ounce purchased only 8.4 barrels of crude oil. These are the two extremes of Gold’s purchasing power in this example (i.e., Gold’s power to purchase crude oil).

Historically though, one ounce has generally purchased about 20 barrels of crude oil on average.

Crude oil closed Friday at $20.63, so at $255.40, one ounce of Gold purchases only 12.4 barrels of oil, which is near the low end of the historical range of Gold’s power to purchase crude oil. But does this conclusion mean that Gold is cheap, or that oil is expensive?

At $20.63 per barrel, crude oil is less than one-half of its $40+ historical high. So it is hard to argue that oil is expensive. Further, as noted in Letter #246, the real price of Gold (adjusted for changes in the CPI) is cheap.

Q. Do you have a chart of the real price of Gold?

The accompanying chart presents the real price of Gold. In other words, I’ve used the CPI changes since January 1934 when the $35 rate of exchange was first established to determine the rate of inflation of those thirty-five 1934 Dollars. I’ve also plotted on this chart the price of Gold in current Dollars, which leads to some interesting observations. 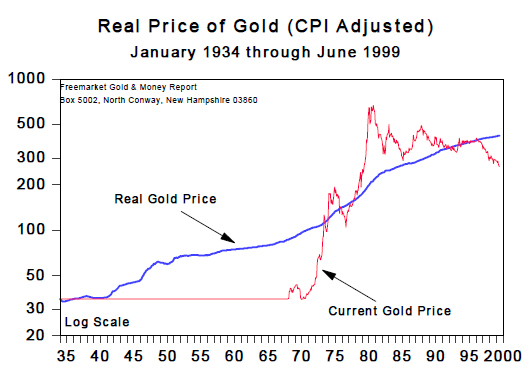 Conversely, when the current price of Gold is below its real price, Gold is relatively cheap.

At present, the current Gold price is below its real price, so it is further evidence that Gold is cheap.

Q. Why did you adjust the price of Gold from 1934 instead of the 1960’s when inflation began taking off?

The price of Gold in the 1960’s can be used as the starting point, provided you adjust the Dollar for all of the inflation that had occurred since the $35 link was first established in 1934. In other words, the Dollar in the 1960’s had already lost a lot of its purchasing power compared to what it bought in 1934.

Consequently, the $35 Gold price in the 1960’s was artificial, or perhaps spurious is a better description.

We know this $35 price in the 1960’s was too cheap because of the huge run on the US Gold Reserve. In other words, it was clear that one ounce of Gold was worth more than $35, so those who understood the situation and were in a position to act on it, redeemed their Dollars for Gold. Some 300 million ounces were redeemed in this way, halving the US Gold Reserve.

Q. Why hasn’t the Gold price risen along with crude oil?

Great question, and in my view, there is only one answer. The Gold price is being manipulated.

I have discussed this argument in much detail over the past year or so. We have seen evidence of that manipulation, such as the constant media drumbeat about IMF sales and the exceptionally precise timing of the Bank of England sale.

The price manipulation cannot last forever, but in all honesty, it has already lasted longer than I had expected. So to be realistic, one must acknowledge that it can go on awhile longer. However, there are limits as to how far any market can be pushed.

Governments have two big guns on their side. First and most importantly, they have the power of the media, which regularly and willingly doles out the anti-Gold propaganda of governments. Second, though central banks are no longer the force they once were, they still own a lot of Gold. Thus, with the anti-Gold propaganda in the media adversely affecting the demand for Gold, and with government adversely impacting the supply of Gold available to the market by dishoarding and lending metal, the price remains manipulated. But again, there are limits.