On the Cusp of Hyperinflation

March 2, 2009 – It was only two years ago in early 2007 that subprime lenders and homebuilders began suffering under growing defaults as a consequence of a housing market ‘bubble’ that had popped. The global credit crisis had begun. Complicated financial structures thought safe began to unravel quickly after word spread that two highly leveraged hedge funds run by Bear Stearns were in trouble.

The eventual failure of those funds in July 2007 pointed a dagger right at the heart of over-leveraged banks, namely, those that had made too many imprudent loans. When Northern Rock Bank failed in the UK later that summer, there was no doubt by then that the worsening crisis was global in scope.

Financial crises are not new. They have recurred throughout monetary history, but became particularly prevalent after the formation of banks that loan out depositors’ money. For example, the Bank of England was formed in 1694, and suffered its first crisis in 1696, which is just one of many episodes of financial panic in its long and storied history.

Crises occur for one simple reason – excessive credit expansion. There are recurring periods when banks loan – and borrowers borrow – too much, putting both in dire straights. These imprudent extensions of credit inevitably strain the financial capacity of both the borrower and lender, as is so clear today some two years into the present crisis.

In short, bank lending engenders the boom, and their easy-money lending creates the illusions of prosperity. But prosperity does not come from borrowed money and consumption. It comes from savings and hard work, and those have been in short supply in recent years.

The inevitable result is that credit today is no longer flowing freely because banks are trying to come to grips with those loans that will never be repaid. This reduction of credit in turn has taken the froth out of bubbly markets. Over-priced assets such as housing and stocks have literally fallen to earth.

Many see this wealth destruction and the contraction of credit that caused it as deflationary. However, the cost of living continues to rise. For example, the Consumer Price Index rose 3.3% in 2008. It climbed this January at an even faster annual pace. That didn’t happen during the deflation that occurred during the Great Depression.

The point is that the dollar is being ever inflated. Declining prices of houses, stocks and other assets are being measured with a currency that is being inflated. In short, the decline in house prices and the stock market would be even more dramatic if the dollar were deflating.

The following chart presents the annual growth rates of M3, the total quantity of dollars in circulation. The blue line is based on Federal Reserve data, which stopped reporting M3 in February 2006. The red line is based on data complied by John Williams of www.shadowstats.com. 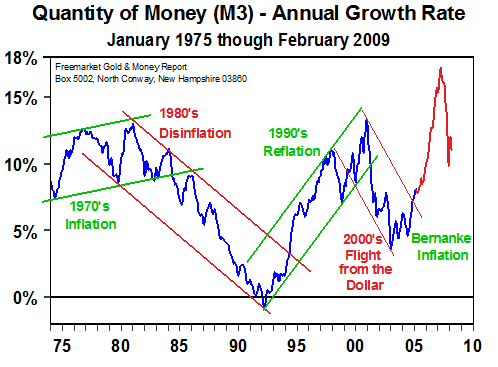 At its peak last year, M3 grew at a 17.2% annual rate. After the collapse of Lehman Brothers, annual growth was nearly halved, but was still an alarmingly high 9.8% in November. Since then M3 growth has remained in double-digits.

The dollar is being inflated, and in my view is on the cusp of hyperinflation that I expect will become increasingly clear within twelve months. To understand why, one only has to look at the cause of hyperinflation.

Hyperinflation does not arise from banks lending too much money. It invariably occurs for only one reason – too much government spending. The money needed to meet this spending comes from the captive central bank, but some further explanation is necessary. Hyperinflation manifests itself in two different ways, which depend upon the nature of the currency system used.

For example, in Weimar Germany in the 1920s and in Zimbabwe today, the central bank prints paper currency, which it then gives to the government for spending. In these countries few people have bank accounts, so the preponderance of commerce is therefore conducted in cash transactions using paper currency.

The hyperinflation that wreaked havoc in many countries in Latin America in the 1980s was different. The banking system in Brazil and Argentina was well developed, and most people had bank accounts. Therefore, deposit currency was being used for the preponderance of commerce in these countries. So instead of moving paper currency by hand to complete transactions, deposit currency was moved by checks, plastic cards, and wire transfers.

Cash currency was relatively unimportant in Latin America, so unlike Weimar Germany, no one was moving paper currency around in wheelbarrows during their inflationary episodes. Instead, the central bank was busy creating bookkeeping entries to add currency to the government’s checking account. As a result, people were seeing zeros added to their bank accounts, namely, turning tens of cruzeiros and tens of pesos in a relatively short period of time into thousands and even hundreds of thousands, which describes what I expect will happen as the dollar begins hyper inflating, and as I say is not too far away. The signs are already apparent. Here are some of the signs that a hyperinflation of the dollar is imminent.

1) Gold is rising against all the world’s currencies. It has recently reached record highs against most currencies. Gold is a safe haven because physical gold is a tangible asset not dependent upon any bank’s promise. Therefore, physical gold does not have counterparty risk. But it is not unreasonable to conclude that gold is also rising for another reason, namely, to protect against inflation. All the money being created by central banks around the world will prove inflationary. So some people are likely accumulating gold because it is an inflation hedge.

2) Crude oil appears to have double-bottomed at $35. It is now back above $44, even though the US dollar has been relatively strong against other major currencies and demand has been dropping because of the weak global economy. Other commodities also appear to have bottomed. The CRB Continuing Commodity Index dropped 47.4% from its July 2, 2008 peak to its December 5, 2008 low, which clearly is a deep correction. But declines of this magnitude are not unknown in commodity bull markets. Regardless, this CRB Index is still nearly twice its February 1999 low of 182.95, which reflects the loss of purchasing power in the dollar this past decade. More to the point, the CRB is in a long-term uptrend even though the global economy has entered another great depression. We can conclude from this observation that commodity prices are not rising because of improved supply/demand fundamentals. Rather, commodities are moving higher because as is the case with gold, physical commodities are tangible assets. They do not have counterparty risk, and they adjust to inflation with higher prices.

4) Few today understand the cause of hyperinflation, nor are prepared for it. More to the point, the prevailing psychology today contains a reckless blind faith that people put in the Federal Reserve expecting these central bankers to get things right. It is general knowledge that the Federal Reserve made things worse during the Great Depression. Why should anyone expect them to get it right this time around? In fact, Ben Bernanke is pursuing policies identical to those taken by Rudolf Havenstein, the governor of the Reichsbank during Germany’s hyperinflation. Mr. Bernanke is creating more currency by creating more debt, which is the singular underlying cause of hyperinflation.

5) T-bonds always provide an important leading indicator. Back during the highly inflationary 1970s and 1980s someone coined the term “bond vigilantes”. It meant that these holders of bonds would sell on the slightest whiff of inflation, forcing up interest rates, which in turn would stop the inflationary pressures that were building. The bond vigilantes are back. Here’s why. Last autumn when the Dow Jones and S&P were making multi-year lows, money flooded into T-notes and T-bonds, driving their prices to record highs (i.e., their yields went to record lows). The Dow and S&P have now fallen to make new multi-year lows, but the yields on government paper remain higher than last autumn. It is a glaring divergence. US government debt instruments are no longer providing the safe haven they did when stocks declined last autumn. It is also noteworthy that Bernanke’s stated intention to buy bonds has not kept them from falling. The bond vigilantes are giving us a message loud and clear that inflation is coming.

6) Most importantly, the federal government has embarked on a course of runaway spending, and it is runaway government spending that causes runaway inflation. The budget deficit is projected at 12% of GDP, a shocking number. It has only been higher during World War II, and is more than twice the worse levels actually reached during the depths of the Great Depression. But it is likely that the federal government will exceed even this frightening target. The weakening economy will without doubt increase spending – for example, in growing unemployment benefits and more bailouts – while at the same time the weak economy lowers revenue. Together these will worsen the deficit.

It is important as this point to ask, why does the Federal Reserve exist? It is not for any of the stated reasons. The continuous, perennial inflation of the dollar makes clear that the Fed does not control inflation. Nor is it to create employment, because private industry and not the central bank does that. The Federal Reserve, just like every other central bank in the world, exists for one reason. It is to make sure that government deficits are funded, that politicians get all of the currency they want to spend. And in the absence of any external discipline imposed on the central bank as existed under the classical gold standard, the central bank will inflate the currency until of course the currency is no longer accepted. It then gets buried in the fiat currency graveyard alongside countless other fiat currencies.

In his annual report to shareholders just released, Warren Buffett had this comment on the federal government’s actions to resolve the economic crisis: “This debilitating spiral has spurred our government to take massive action. In poker terms, the Treasury and the Fed have gone “all in.” Economic medicine that was previously meted out by the cupful has recently been dispensed by the barrel. These once-unthinkable dosages will almost certainly bring on unwelcome aftereffects. Their precise nature is anyone’s guess, though one likely consequence is an onslaught of inflation.”

He reemphasizes the inflation risk later in his report by commenting: “I still believe the odds are good that oil sells far higher in the future than the current $40-$50 price.” He also notes that “When the financial history of this decade is written, it will surely speak of the Internet bubble of the late 1990s and the housing bubble of the early 2000s. But the U.S. Treasury bond bubble of late 2008 may be regarded as almost equally extraordinary…Clinging to cash equivalents or long-term government bonds at present yields is almost certainly a terrible policy if continued for long [because] cash is earning close to nothing and will surely find its purchasing power eroded over time.”

Mr. Buffett stops far short of forecasting a hyperinflationary collapse, but his message is clear nonetheless. Inflation is a risk, to which I would add, hyperinflation is the real risk. In a world of fiat currencies, the only escape is the precious metals, so now more than ever, own physical gold and physical silver.