September 14, 1998 – The Gold price has rallied sharply over the past two weeks, and may have formed an important bottom. Though it is far too early for us Gold bulls to declare victory (in this regard, see my thoughts on the technical condition of the Gold market on Page 4), we must not lose sight of the upside potential in the Gold price from here.

It is always important to have an upside price objective because only with this price objective in hand can one make a reasonable assessment of the potential risk-vs-return of any investment or trading strategy. Moreover, possession of a reasonably determined upside price objective will help to overcome the emotional baggage that we all carry when it comes to trading and investing in the various markets. This point is particularly important after a bear market has been in place for some time, as is presently the case with Gold.

At the end of bear markets the negative sentiment invariably is quite heavy. This outcome is not an unreasonable occurrence after months and even years of declining prices. It is only human nature to react negatively to some investment which seems to move only lower in price, and by the end of a bear market, an unbiased and unemotional assessment of that investment is very hard to make.

Nevertheless, making an assessment is necessary. Only with this assessment can one determine whether any investment is good value, and therefore worth buying and accumulating. As a result, it is necessary to establish an upside price objective for Gold, and to do this properly, one must use a disciplined methodology. The Fear Index works very well in this regard. It can be used to establish a price objective, which is based on numbers, not emotion.

For the benefit of new subscribers, the Fear Index measures the relationship of Gold to Dollars. It is based on the recognition that Gold is the only money that is no one’s liability, and that the importance of this attribute of Gold varies over time. When confidence in the monetary and banking system is high, fear about the Dollar subsides, so the demand for Gold subsides along with the diminishing fear. Conversely, when fear about the purchasing power of the Dollar and/or the safety of the US banking system is questioned, fear begins rising, as does the demand for Gold because it is uniquely money not dependent nor contingent upon someone’s promise. The Fear Index captures these movements in confidence.

The Fear Index is measured as follows, and the numbers below are for the end of August:

As of August 31st, the Fear Index was 1.27%, which is a record low. Never before has confidence in the Dollar and the US banking system been this high. This result is largely due to the exceptional stewardship of Messrs. Greenspan and Rubin, but it is also due to other factors.

Consumer confidence has risen in recent years because of the relatively strong US economy. The bull market in stocks has helped consumer confidence, but today’s Fear Index may also be the result of the relatively low regard in which Gold is now held by so many. Again, after a long bear market, amid growing concern about central bank dishoarding, perhaps the Fear Index is unusually low because of a decline in trust in the attributes of Gold as much as any increase in the confidence in the Dollar. In any case, the present 1.27% Fear Index is most important when viewed within its historical context. 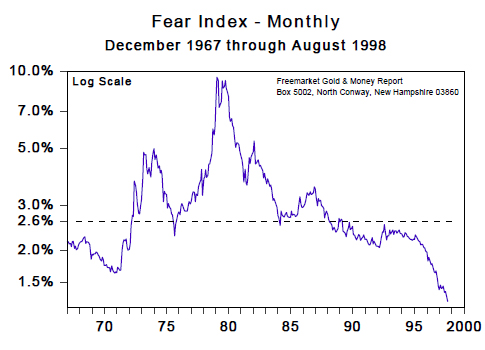 It is necessary to answer this question in order to make any assessment about the potential for the Gold price because the demand for Gold rests upon its unique monetary attribute. For me, the answer to this question about the Dollar is simple. Yes, of course confidence in the Dollar and US banking system will continue to fluctuate in the future. This conclusion is as obvious to me as J.P. Morgan’s famous dictum about where the stock market was headed – it will fluctuate, he predicted.

Even though Messrs. Greenspan and Rubin have done a great job, nothing regarding the Dollar has fundamentally changed. When you hold Dollars you are tacitly or otherwise accepting the risk of holding those Dollars, and others’ promises. So the basis of any Gold price projection rests on determining whether the risks of holding Dollars is increasing and more importantly, whether more people are recognizing those risks.

In recent letters I have been making the point that a banking crisis looms ominously on the horizon. Having been a banker in the late 1960’s and 1970’s, I’ve seen how banks get into trouble. During the good times, they over-extend credit, reaching to ever lower levels of acceptable credit risk and/or venturing into uncharted areas where they have little experience and expertise.

For example, in the last few decades we’ve seen banking crises arise because of bank exposure to REIT’s (circa 1972), New York City paper (1974), Third World debt (1982), and commercial real estate (late 1980’s). What will cause the next crisis? Latin American loans? Derivatives? A deeper collapse in Japan? No one knows, but just as sure as the sun rises, there will be more banking crises. And perhaps one is starting now.

The stock of Japan’s Fuji Bank declined 15% one day because of rumors that it had $15 billion of derivative losses. Similar price declines have hit Credit Suisse due to Russian and other emerging market exposure. Closer to home, the stocks of Citibank and Chase Manhattan and other banks have crashed, losing 50% or more in recent months.

I believe that the market is telling us something by the huge decline in the market value of bank stocks – a banking crisis is upon us. If so, it is inevitable that confidence in the US banking system and the Dollar (its collapse on the foreign exchange market is as telling as the crash in bank stocks) will fall, and the Fear Index will rise. On this basis, we can establish our price objective for Gold. We will project the Fear Index, and then use its formula to calculate the Gold price.

We can see from the page 1 chart that the Fear Index is abnormally low. But what is the right level to use in our calculations? The Fear Index has averaged 3.06% since December 1967. It peaked at 9.46% during the monetary turmoil of the last month’s of the Carter presidency. It has averaged 2.28% since Mr. Greenspan assumed his post at the Federal Reserve. It is impossible to say which of these results, if indeed any of them, are the right level, but we can make one conclusion. If a banking crisis is upon us, and if people will continue to value Gold because it is money that is not contingent upon anyone’s promise, then the important point is that from here the Fear Index will be rising.

Assuming for the moment that M3 and the US Gold Reserve remain unchanged, if the Fear Index rises to only 2.28%, the Gold price will be $495.45.

If the Fear Index rises to its 3.06% average, then the Gold price will be $664.95. And if the last years of the Clinton presidency prove to be as bad for the Dollar as Carter’s were, a 9.46% Fear Index yields a Gold price of $2,055.70. This of course assumes that the US Gold Reserve does not decline nor M3 increases. If they do change this way, which has been their general trend for decades, then the projected Gold price will be even higher.

These are staggering numbers to be sure. But they are not outlandish. After all, we’ve been there before. These levels on the Fear Index have already been achieved, and I haven’t even mentioned the all-time 29.86% peak in the Fear Index reached during the Great Depression. That level of fear about the Dollar and the US banking system if repeated today would put Gold at $6,488.75 per ounce.

Emerging market debt. The economic depression in Asia. Collapsing stock markets worldwide. Derivatives. Currency turmoil. Y2K. You pick the problem that you think will ‘break the banks’. The banks now face all of these problems, and probably more we don’t even know about. I expect a full-fledged banking crisis will be the result.

Fear is about to rise, and so is the Gold price, to a more normal level – above 2% on the Fear Index. But it might rise far beyond. Importantly, if history is any guide, and it usually is, then the upside potential for Gold from here is spectacular.