September 23, 1999 – In a continuation of the sell-off that began a few weeks ago, the Dow Jones Industrial Average today closed down -205.47 points, breaking below key support. This break of support is an important signal that should not be ignored.

Today’s action in the Dow suggests that a major top in the market has been firmly put into place over the last several months, and that we have now begun a bear market. The accompanying chart puts the current position of the Dow Jones Industrials into perspective. 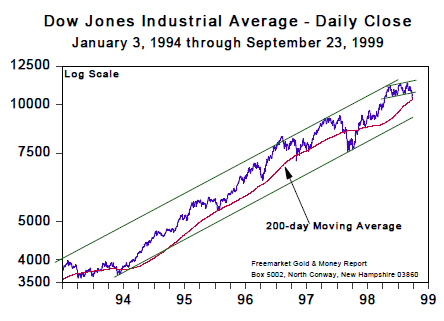 I would like to make a few points about the stock market in general, beginning first with the accompanying chart. The Dow Jones Industrial Average remains within its long-term uptrend channel. Also, this widely followed average presently is still above its 200-day moving average, so it is possible that we are seeing just a correction in an ongoing bull market. However, the break down from the small trend channel that has been forming over the past several months looks like a topping formation, not a pattern that might form before a correction.

In any case, if the Dow’s 200-day moving average, currently at 10,252, is broken, the next level of key support doesn’t come in until the mid-9000’s, and that’s a long way down from here. It could be a scary decline, particularly in view of the broad-based weakness that we have been witnessing for months.

Such divergences between the major averages historically have proven to be a classic pattern at market tops. Given the extreme level of over-valuation in the stock market today when measured by time-tested indicators such as P/E ratios – which are now sky-high when compared to historical norms – and other trusty, proven indicators such as dividend yields – which are minuscule by any measure – this stock market is on very shaky ground. ¤