November 16, 1998 – I approach all the markets from two different perspectives. I look at the technical side of the market to see what the charts are saying. I also look at the underlying fundamentals in order to determine value as an indication of what the likely outcome may be for the market price. Only when my view of the charts is consistent with my view of the underlying fundamental condition of a market will I then jump in and take an investment or trading position. Readers of these letters have seen me apply this approach in recent years to the Yen, which at the moment appears to be rapidly approaching another turning point.

There have been several important turns in the Yen in recent years. We rode the Yen strength in 1995 and jumped off at ¥80, right near its all time high. Back then during that move the chart was in synch with the fundamentals. Namely, the deflation Japan was experiencing at that time increased the demand for the Yen, which caused it to strengthen relative to the other national currencies, and particularly against the US Dollar.

The deflation in Japan persisted, but the Yen began to reverse course. The big fundamental change was the marked deterioration in the solvency of Japan’s financial system, which significantly decreased the demand for Yen. Why hold Yen when there was too much uncertainty about the creditworthiness of the bank where that Yen was deposited?

Foreign investors and even the Japanese themselves deserted the Yen. Therefore, the Yen began a protracted slide, taking it all the way back to ¥147 earlier this year.

Then another turn began, and I wrote about it in August in Letter #230, “Capital Heads Home”. The Yen had closed that week at ¥143.3, and I observed that the “Dollar’s rise against the Yen has ended”. Over the next several weeks the Yen climbed all the way back to ¥110 in what was a near free-fall in the Dollar.

More recently, the Yen has again begun to weaken, and it closed this week at ¥122.2. What are the major fundamental factors driving the Yen at the moment? What is the chart saying about the Yen’s prospects?

The bad fundamental conditions that I am referring to are not just the result of the shaky financial condition of Japan’s banks. Rather, a new factor now seems to be emerging as the dominant force affecting the exchange value of the Yen – it is bad government policy that will seriously and perhaps irreparably undermine the purchasing power of the Yen. 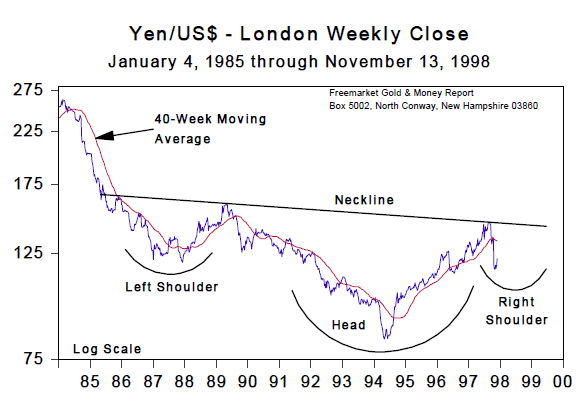 The ill-fated Japanese people have suffered through nearly twenty years of government incompetence and mismanagement. First, government created the monetary and financial conditions that allowed the ‘bubble economy’ in Japan to develop throughout the 1980’s. Then in the 1990’s, the Japanese government has been pursuing wrong and potentially destructive policies that have worsened and prolonged the effect of the crash of Japan’s stock market and the demise of its bubble economy. And as harmful as Japanese government action has been, it is about to get worse, and the Yen will suffer as a consequence.

It seems that the Japanese government is intent on flooding the Japanese economy with even more liquidity than has already been created. This newly created Yen, which is now becoming excessive, threatens to devalue the purchasing power of the Yen, which will lead to protracted weakness in the foreign exchange value of the Yen.

I’ve written before about Japan’s woes, and what is needed to solve its problems. Japan faces today the same problems faced by the United States in the 1930’s – a faltering economy, rising unemployment, and most importantly, an insolvent banking system which directly affects the integrity of the currency.

The United States solved its problems in the 1930’s by revaluing its Gold reserve. The result was that the newly created money from this process helped rebuild the economy regardless of the dire condition of the banks because this money was sound. It was not created out of thin air, and as a consequence, people had the confidence to use this money. And they did use it, thereby re-establishing economic activity among themselves, which in time put the economy back on track.

The Japanese government does not seem to understand one very important point. It will be the Japanese people, and not the government, that will again make right the economy.

Therefore, the Japanese government should be seeking to rebuild confidence. It will not achieve this goal with hastily legislated schemes financed by creating money out of thin air because the Yen itself has become the problem. The Japanese people no longer have the needed confidence in their currency. Economic activity therefore suffers as a consequence, and will continue to suffer until the Japanese government addresses this underlying problem of the currency, like the United States government did in the 1930’s with Gold.

The same option is open today to Japan, if its government had the vision and the will to act. Japan could rebuild its monetary system by monetizing Gold, rather than creating Yen ‘out of thin air’ as it is now doing to fund all the newly created government debt. Unfortunately for the Japanese people, the government there seems intent to move in the same way it has been moving for the past several years, even though those efforts have been ineffective in resolving Japan’s economy.

Therefore, both the chart pattern of the Yen and the underlying fundamentals of the Japanese economy are turning for the worst. The message is that the Yen will not appreciate significantly from here, and that there is a real risk that the Yen will weaken considerably in the weeks and months ahead. The answer for everyone is to therefore avoid the Yen – and for traders to play it mainly from the short side – until and unless the Japanese government starts to get things right.