Sept 9, 2008 – There was a thought-provoking book published last year entitled The Black Swan. It provides an insightful perspective into seemingly improbable events (i.e., a ‘black swan ‘) and our thinking that surrounds them. The author, Nassim Nicholas Taleb contends that black swans underlie most everything within our world, but we invariably fail to acknowledge the possibility of a black swan event until after it occurs.

Taleb ‘s book though, is much broader in scope than the perspective he provides about black swan events. It is an incisive and intelligent study of the way we think and how we view the world.

Taleb contends that most people focus only on things that we already know – or think we know – and that we generally fail to consider what we don ‘t know. The result is that most people are not able to look beyond very narrow confines, and these severely limit their horizon. Most people therefore are blind to the possibility of significantly large events.

Taleb asks: “Why do we, scientists or nonscientists, hotshots or regular Joes, tend to see the pennies instead of the dollars? ” The result is that what people think they know can be truly inconsequential to the way the world really works. Taleb encapsulates this insight thusly: “Black Swan logic makes what you don ‘t know far more relevant than what you do know. “[Emphasis in original]

Taleb ‘s book came to mind the other day. I was thinking about those people who still believe that governments do not intervene in the gold market.

It is clear that most of them have never read the work published by the Gold Anti-Trust Action Committee and made available free on its website, www.GATA.org. I say this because if they had read this work, they could try to refute it, and thereby prove their point that the gold market is not manipulated. But instead of looking at all the hard evidence amassed by GATA, they use spurious arguments. Instead of using logic, they rely on conventional wisdoms, for example, by believing what politicians or central bankers tell us, completely oblivious to the time-tested adage that government pooh-bahs only tell us what they want us to hear. What ‘s more, much of the work of these anti-intervention advocates has a blatant naivety that makes it apparent to experienced market traders that they do not understand the precious metals and the futures markets in particular.

Anyway, what brought me to this topic and Taleb ‘s book was Bill Murphy ‘s commentary at www.lemetropolecafe.com. Bill often writes about the ongoing government intervention in various markets, but given that Bill is also a co-founder of GATA, it is understandable that he focuses much of his attention on gold. He frequently points out the obvious footprints left by government-directed central banks after their interventions and as a consequence, their interference with the gold price.

In his daily market commentary on September 1, 2008, Bill observed: “You have to wonder how many times people can look at the exact same chart, with gold dropping at the same time, before they ask what the heck is going on? Free markets just don ‘t trade that same way over and over and over, no matter what the outside fundamental factors are. “

Indeed, one really does have to wonder, which made me think of two of the characters in Taleb ‘s book, “Fat Tony ” and his complete and total opposite, “Dr. John “. Here is how Taleb describes them:

“Fat Tony…[is] more politely, ‘Brooklyn Tony ‘, because of his accent and his Brooklyn way of thinking, though Tony is one of the prosperous Brooklyn people who moved to New Jersey twenty years ago…He started as a clerk in the back office of a New York bank…and figured out the game of how you can get financing from monster banks, how their bureaucracies operate, and what they like to see on paper…Tony has a remarkable habit of trying to make a buck effortlessly…Tony ‘s motto is “Finding who the sucker is. “…Finding these suckers is second nature to him. If you took walks around the block with Tony you would feel considerably more informed about the texture of the world just “tawking ” to him. Tony is remarkably gifted at getting unlisted phone numbers, first-class seats on airlines for no additional money, or your car in a garage that is officially full, either though connections or his forceful charm. “

“Dr. John is a master of the schedule; he is as predictable as a clock…Dr. John is a painstaking, reasoned and gentle fellow. He takes his work seriously, so seriously that, unlike Tony, you can see a line in the sand between his working time and his leisure activities. He has a PhD in electrical engineering…Since he knows computers and statistics, he was hired by an insurance company to do computer simulations…Much of what he does consists of running computer programs for ‘risk management ‘. “

Taleb then brings these two completely different people together in a make-believe encounter to ask them a question in order to compare their answers. He tells them that he has a coin and that it is “fair “, meaning that it has an equal probability of coming up heads or tails when flipped. He then tells them he has flipped it ninety-nine times and the coin has landed heads each time. Taleb then asks them to calculate the odds of the coin landing tails on the next throw.

“Dr. John: Trivial question. One half, of course, since you are assuming 50 percent odds for each and independence between draws.

NNT [Taleb] What do you say Fat Tony?

Fat Tony: I’d say no more than one percent, of course.

NNT: Why so? I gave you the initial assumption of a fair coin, meaning that it was 50 percent either way.

Fat Tony: You are either full of crap or a pure sucker to buy that “50 pehcent ” business. The coin gotta be loaded. It can’t be a fair game.

(Translation: It is far more likely that your assumptions about the fairness are wrong than the coin delivering ninety-nine heads in ninety-nine throws.)

Fat Tony (whispering in my ear): I know these guys with the nerd examples from my bank days. They think way too slow. And they are too commoditized. You can take them for a ride.

As Bill Murphy noted, free markets just don ‘t trade the “same way over and over and over. ” If the gold market were a ‘coin ‘ flipped ninety-nine times in recent years, each time it came up heads. As Fat Tony understands, da coin gotta be loaded.

Taleb goes on to write: “Now, of the two of them, which would you favor for the position of mayor of New York City? Dr. John thinks entirely within the box, the box that was given to him; Fat Tony almost entirely outside the box…Have you ever wondered why so many of these straight-A students end up going nowhere in life while someone who lagged behind is now getting the shekels, buying the diamonds, and getting his phone calls returned?…Some of this may have something to do with luck in outcomes, but there is this sterile and obscurantist quality that is often associated with classroom knowledge that may get in the way of understanding what ‘s going on in real life. “

Here ‘s another example how Fat Tony may see current events. We are told that the US Mint is unable to meet the demand for American eagle gold coins. Do we accept the Mint ‘s word for it, or dig deeper and consider other possibilities?

Well, before answering that question, take a look at the accompanying chart of US Mint coin sales. It was prepared by Nick Laird of www.sharelynx.com. 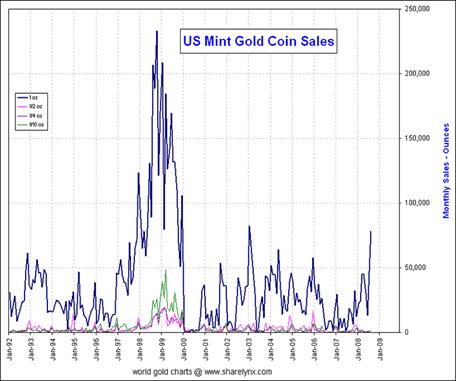 What ‘s clear from this chart is that current sales demand (the blue line shows sales of one ounce gold eagles) is not out of line with previous periods in which the US Mint was able to meet demand. So why can ‘t the Mint meet demand this time around? What aren ‘t they telling us?

Here ‘s something else about the US Mint that Fat Tony may find curious. The Treasury reports the US Gold Reserves monthly at this link: http://fms.treas.gov. These reserves include “gold held by U.S. Mint facilities “, which the report labels as “working stock ” and describes it as “the portion of the U.S. government-owned Gold Bullion Reserve that the U.S. Mint uses as the raw material for minting congressionally authorized coins. ” The August 29, 2008 report says the quantity of working stock is 2,783,218.656 ounces. Yet we are told by the Mint that none of that can be minted into gold eagles? Would Fat Tony say we are a “sucker ” to believe that the Mint cannot produce gold eagles to meet demand?

It ‘s not hard to imagine what Fat Tony would say about the accuracy of the Treasury ‘s reports. And he would no doubt call anyone who believes them a “sucker “.

So what would Fat Tony think about this picture? I think he would say the Treasury has something to hide. If they didn ‘t, the Treasury and the Federal Reserve would not meet and make their decisions in secret behind closed doors. And what is it they are trying to hide?

Of course, no one really knows because the Treasury isn ‘t talking, and there ‘s the rub. Who will you believe? Whose argument carries more weight? A central banker? A Dr. John? Or Fat Tony?

In the commentary I refer to above, Bill Murphy included an insightful quote from Richard Russell, the dean of investment newsletter writers. Though it was penned by Russell nearly ten years ago, the wisdom it contains is timeless: “One thing is certain in my mind; the central banks do not want to see gold higher, in fact they would love to wipe gold off the face of the earth? Why? Because gold is real money and they cannot control it. They can’t bankrupt it. They can knock it down temporarily, but it’s still there. A paper currency can be destroyed but gold can’t be destroyed. So all the banks can do is to try and keep gold from rising in terms of paper contracts. “

It ‘s really very simple. Fiat currency is a scheme perpetrated by central banks. To make their scheme work, they intervene in the gold market to manipulate the gold price. By doing so they try to make their fiat currency look better.