May 26, 2008 – Probably almost everyone is familiar with the hyperinflationary episode that engulfed Germany after the First World War. That nation’s economy was crippled by monetary problems that resulted in dreadful personal hardships, even though up to that time Germany had achieved one of the highest living standards in the world.

The newly formed German government, named for the city where their constitution was drafted after the Kaiser’s abdication in 1918, kept pumping up the money supply. The process started relatively slowly, but quickly the pace of money creation accelerated.

There was no discipline on the creation of new currency, with the result that it was being issued to excess. Within a few short years, the German government eventually destroyed the Reichsmark, the currency it had been issuing, making the words Weimar Germany synonymous with hyperinflation, economic collapse, deprivation and personal hardship. All the wealth saved in Reichsmarks was wiped out.

For example, in his classic book, “Paper Money“, penned three decades ago under the pen name of Adam Smith, George J.W. Goodman recounts the story of Walter Levy, an internationally known German-born oil consultant in New York. Levy told him: “My father was a lawyer, and he had taken out an insurance policy in 1903. Every month he had made the payments faithfully. It was a 20-year policy, and when it came due, he cashed it in and bought a single loaf of bread.”

The following photo is from an insightful book by Bernd Widdig entitled “Culture and Inflation in Weimar Germany“. This photo shows one way in which people coped with rising prices. 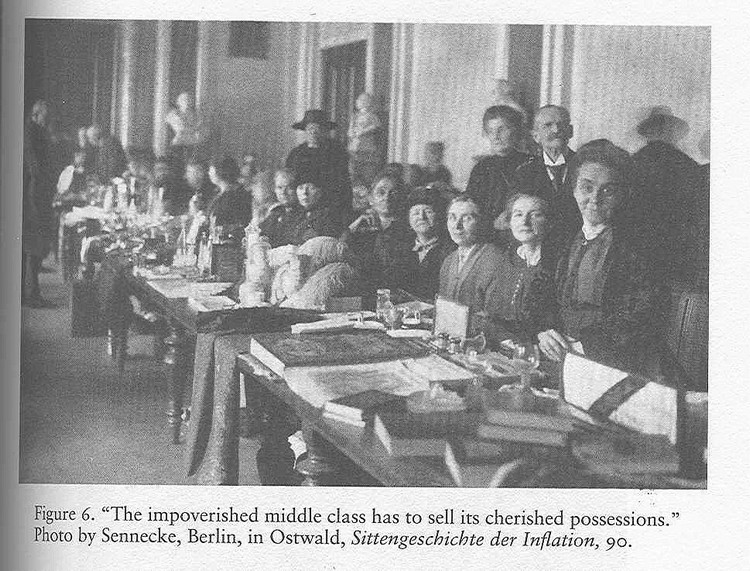 As the inflation worsened, people sold whatever they could to survive. Widdig succinctly describes it in the caption to the above photo as follows: “The impoverished middle class has to sell its cherished possessions.“He should have correctly stated though that it was the “newly impoverished middle class“. They only became destitute after the inflation had destroyed their savings and ability to maintain their standard of living.

Sadly, the problems of Weimar Germany are now appearing in the US. To survive the impact of rising prices, Americans today – like Germans did eight decades ago – are selling cherished possessions, as explained in a recent story by Associated Press entitled “Americans unload prized belongings to make ends meet“. To view the full article click here.

AP explains how some Americans are trying to cope with the ravages of inflation: “To meet higher gas, food and prescription drug bills, they are selling off grandmother’s dishes and their own belongings. Some of the household purging has been extremely painful – families forced to part with heirlooms.” It is indeed no doubt painful, just as it was for the Germans in the photograph above, who surely must have been putting on a brave face for the photographer.

Confirmation of the AP story came a few days later on May 14th from an article in the Washington Post, which reported: “Nearly seven in 10 Americans are worried about maintaining their standard of living, as concern has spiked higher in just the past five months, according to a new Washington Post-ABC News poll. Soaring consumer prices are a major challenge, with many people struggling under the weight of the rising costs of fuel, food and health care. The poll shows that the weak economy and rising prices are high among voters’ concerns, and contribute to a souring national mood in this presidential election year. More than eight in 10 said the country has veered pretty seriously off-track, and a separate poll released yesterday by ABC showed economic anxiety at its highest level on record since 1981. Overall, 68 percent of people surveyed in the new Post-ABC poll said they were concerned about their ability to keep up their lifestyles, a jump of 17 percentage points since December. The increase cuts across party and income lines.”

Crude oil is $132. Corn is $6.The cost of everything is rising. Inflation is worsening, and it’s not hard to understand why. M3, the total quantity of dollars, is now growing by 17% per annum. Weimar inflation has arrived in America.

The Federal Reserve is following the footsteps of the central bank in Weimar Germany. It is the same path taken by many central banks that have issued countless fiat currencies based on nothing but government promises. It is the path to the fiat currency graveyard, and the once almighty US dollar – which long ago used to be “as good as gold”, just like the Reichsmark once held that same exalted title – is knocking at the graveyard’s gate.

This insight about the importance of gold and shortcomings of fiat currency is not suprising, nor is it new. Here is what Rep. Howard Buffett, father of Wall Street legend Warren Buffett, had to say on May 4, 1948. “Our finances will never be brought into order until Congress is compelled to do so. Making our money redeemable in gold will create this compulsion.”

Absent that compulsion, the dollar is going the way of the Reichsmark. Don’t count on the US government to do the right thing and make the dollar redeemable into gold. Instead, take those steps necessary to protect yourself and your family to prepare for the dollar’s inflationary collapse. Buy gold. Buy silver. Avoid the US dollar.