A Major Base in the Making

July 17, 2000 – “The price has to stop falling before it can begin rising.” These words of advice were offered to me by a good family friend back in early 1974. Not only was he describing some specific stocks, but he was also talking about the stock market in general, which was taking an horrific drubbing at the time. And though many stocks looked to be exceptionally good value when he gave his advice, six months later they were even better value because prices continued to sink lower.

Though they seem on the surface to be blatantly obvious, they do offer a lot of wisdom, and I have always found them to be a good testing rod by which to evaluate any market. Over the past few months I have been thinking about those words often when I look at Gold. The reason is that the price of Gold has stopped falling, and this observation means that a base is in the making. Given the length of time during which this base is being formed, I expect that it will prove to be a major base that will soon launch Gold to much higher prices. 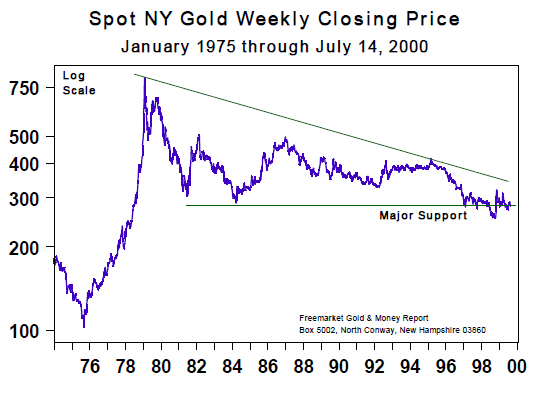 A quick look at the accompanying chart shows that Gold has been going sideways for nearly three years. Sure, there have been some spikes down below the $280 line, which is labeled as “Major Support” on the chart. And there have also been a couple of spikes above that level as well. But on balance, the downtrend in the price of Gold has stopped, and Gold has been in a sideways trend for nearly three years. The price of Gold may not yet be rising, but at least it is no longer falling.

So the price of Gold has stopped falling, and Gold represents exceptional value at the moment. But there is also some other evidence that a major base is being formed.

There have been some important bullish divergences over the past three years. These offer further proof that a major base is in the making.

A divergence occurs if the different market indicators do not confirm one another, so they signal that a turning point is near. When, for example, the stock market makes a new high but the advance/decline ratio does not confirm by making its own new high, a bearish divergence occurs. It is an indication that the advance in prices may be ending because the uptrend is losing momentum.

When the XAU reached its low of 48.89 on August 31, 1998, the Gold price was $275.70. However, after the Bank of England announcement of its decision to dishoard Gold the following year, the Gold price broke to a new low reaching $253.70 by July 19th, but the XAU did not confirm. Its 57.84 low on that date was above its previous low, thus establishing a bullish divergence. The non-confirmation by the XAU was a signal that downside momentum in the market had ended, and indeed, Gold and the XAU rallied from their low point with Gold reaching a recovery peak in October 1999. But here the XAU again did not confirm.

Because of the problems that arose from hedging in Ashanti and Cambior, the hedging of expected future mining production came under a renewed level of scrutiny, and the stocks of many mining companies were greeted with wariness even as Gold was rallying. The mining companies with huge hedge books were under price pressure, which weighed down the XAU and caused this non-confirmation.

The question as we go forward from here is whether another non-confirmation awaits us. Will there be another bearish divergence before Gold finally turns higher? Given that the last round of weakness was in the XAU, it is reasonable to expect that if another non-confirmation occurs, the weakness will again be in the XAU. Many mining companies remain heavily hedged, so they therefore are seen to be a problem in the mind of many investors. In fact, these companies are probably a problem in the mind of most investors, given the relative weakness of the stocks that hedge compared to those that have little or no hedging.

There is further evidence to suggest that the XAU will be the weak part of the next non-confirmation. The support that has materialized for Gold around $280 continues to be quite solid. Therefore, if another bullish divergence does occur, it will probably be the result of the XAU making a new low below 48.89, while the price of Gold stops above $253.70 – and probably well above that level given the relative strength in Gold that we are seeing.

Thus, Gold has stopped falling. But the drop in Comex open interest and trading volume shows that investor apathy continues to grow. This is an important observation. If history is any guide – and it almost always is – the current conditions in the Gold market mean that an upside breakout in the price of Gold is near. The base that has been forming for nearly three years is nearing completion.

When will the break-out occur. Readers of these letters know that while I have been cautious ever since Gold broke back below $300 earlier this year, I have been expecting a good rally later this year. September and October look to be the likely time frame for that rally.

What price would signal a break-out from this base? There are two levels to watch.

First, Gold has to clear $325, the October 1999 high, and then it has another formidable task. It has to break above the downtrend line shown on the Page 1 chart, which currently is about $342.

Those prices may seem far away, but they aren’t really.We’ve just become accustomed to the quiet conditions in the Gold market in recent years, so it is easy to lose sight both of the big moves Gold has often made in the past as well as the exceptional value that Gold offers at the moment. But as the surge in volatility and the Gold price seen in October 1999 indicates, Gold always has the potential to surprise. And it appears that before too long – probably in September or October – Gold will surprise many once again.