June 26, 2000 – Energy Secretary Bill Richardson has been screaming about high oil prices. Al Gore and countless other Democrats have been harping about price gouging by the oil companies, particularly in Illinois and neighboring states where gasoline is selling for around $2.25 per gallon.

Even Texas Governor George Bush has gotten into the act, which is somewhat surprising because there has no doubt been a lot of oil money funding his bulging presidential campaign coffers. But Gov. Bush has indeed stated that he supports a Federal Trade Commission inquiry launched by the Clinton administration to investigate gas-prices in the Mid-West and the West Coast. Given this political clamoring, it will be useful to examine whether crude oil is indeed expensive.

On the surface, it looks like the politicians may be right. After all, it was only eighteen months ago that the national average price of gasoline was just over $1, and it is now $1.70. But as is usually the case with most things in economics, the reality is not always what it appears to be at first blush.

The reason that appearances are deceiving in the case of oil prices is simple. The dollar is not a good measuring stick by which to make value comparisons. Because it is being debased and inflated year-in and year-out, the dollar does not accurately measure value over long periods of time. And it is long periods of time that should be used in order to accurately answer the question whether or not crude oil is expensive.

Only a multi-year comparison will present a true picture of the price of oil. In other words, while gasoline prices have no doubt risen, maybe those $1 per gallon prices in early 1999 were an exceptional bargain, in which case, $1.70 for gasoline may not be expensive at all.

There are any number of ways to make a comparison of oil prices. For example, crude oil could be compared to natural gas. If one were to measure their equivalent energy and assume that they were perfectly substitutable for one another, then based on natural gas prices today, crude oil should be $45 per barrel, some 40% higher than the actual price. So by this comparison crude oil looks cheap.

Another way to measure crude oil is to look at its price in terms of a constant weight of gold. The accompanying chart shows the month-end price of crude oil in GoldGrams (gg’s) since 1945. June 23rd is included to show the current price. 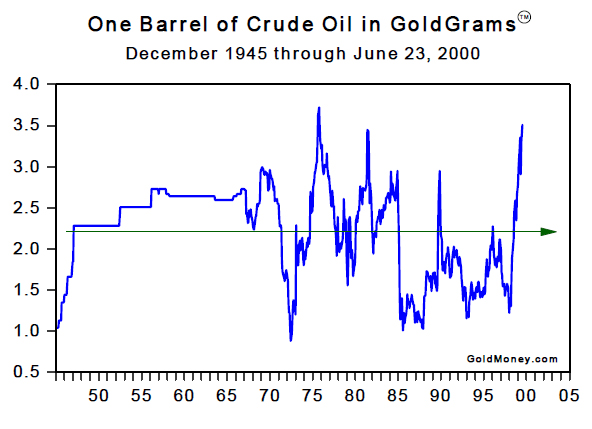 By this comparison crude oil looks very expensive. It now takes 3.5gg to purchase one barrel of crude oil, which is a price just below the record high of 3.7gg reached in September 1976 and well below the average post World War II price of only 2.2gg per barrel.

However, the comparison may again not be presenting the true picture of gasoline prices. The reason in this case is that we know from the Fear Index and other measures of valuation that gold is exceptionally cheap at the moment.

In a world of floating exchange rates and commodity prices that appear to be volatile, this problem of measuring and assessing crude oil’s price can be solved by determining when it was fairly valued at some moment in the past and then compare today’s price to that past price. I have looked at this problem and determined that crude oil was fairly priced when it sold in January 1974 at $10.11 per barrel.

Its price that month had increased from the previous level of $4.31. OPEC had just recently taken control of oil pricing away from the big oil companies, and OPEC made an adjustment to the price in order to once again get for its oil an amount of purchasing power equal to what had prevailed before President Nixon ended the dollar’s link to gold in 1971. In other words, because of inflation, the dollar was losing purchasing power. So OPEC justifiably raised the price of crude oil in order to recoup the purchasing power that had been lost from an ever-inflating dollar.

So is crude oil expensive? No, it’s not. We have just become accustomed to exceptionally cheap prices for petroleum products.

Most people unfortunately don’t realize how cheap crude oil has been because they use the ever-inflating dollar in an attempt to compare value over time. As a result, demagogic politicians are given fodder by a hapless public to bash OPEC and the oil companies. The ultimate irony of course is that it is these same politicians who are responsible for the dollar’s sad state.