June 5, 2000 – A couple of weeks ago when the Dow Industrials were threatening to break below 10,000 and the NASDAQ looked ready to collapse through 3000, the stock market’s traditional summer rally seemed an impossible dream. What a difference a week can make.

The perennial bulls are once again singing like larks on a warm summer’s morning that the traditional and long awaited summer-time rally has begun. Has the stock market really resumed its upward course? Or is the newly restored confidence of the perennial bulls just a mad folly arising from some wacky and wishful thinking?

Readers of these letters know my basic view on the stock market. For my medium term perspective, I have been saying over the past several months that I expect the Dow Industrials to trade within a 10,000 to 12,000 range. I’ve also allowed for the possibility of a drop in the NASDAQ toward 3000, and this outlook has proven fairly accurately.

From a short-term point of view, I suggested recently that because the Dow failed to trade above 11,000 on its last rally, it looked vulnerable and ready to test and probably break below 10,000. We got that test, but the Dow has managed to hold on to support, at least so far. But I want to quickly point out that the Dow has not yet managed to climb back above 11,000, and until it does, the Dow continues to look vulnerable here to further downside weakness and a renewed test – and maybe this time the possible breaking – of support at 10,000.

But it is not the short-term nor the medium-term perspective that is of importance to me at this particular juncture in the market and at this moment in time. Instead, it is the long-term perspective that interests me the most, and readers know why. It’s because we are watching and waiting to see which of two scenarios the stock market will take as and when the bubble finally bursts. These are the Nikkei scenario and the Weimar Germany scenario.

I’ve already written in detail about these two alternatives, so I’ll only re-cap them briefly here. Though one happened in Japan in the early1990’s and the other in Germany in the early 1920’s, they are linked by a common thread – it is in my view a basic principle that stock market prices ultimately depend upon the purchasing power of a nation’s currency.

To expand upon this point, in contrast to bonds – all ofwhich are debt instruments denominated in some specified currency – stocks are an equity instrument, so they are not denominated in Dollars or Yen or any other currency. We use currencies as a convenience to price stocks and to trade in them. But stocks are really denominated in the assets and earning power of the company whose stock you own. This distinction becomes clear by comparing what happened to the Nikkei andthe Yen in contrast to what happened in Weimar Germany with its currency, the Reichsmark.

In Japan, when the bubble finally burst the stock market collapsed, but the Yen has survived. Thus, the loss of wealth resulting from the drop in the Nikkei was measured more or lessaccurately by the Yen, which has retained its purchasing power and continues to circulate as currency. 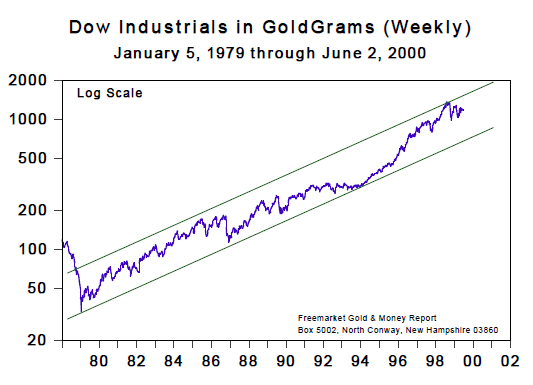 In Weimar Germany, however, the stock market went to infinity in terms of Reichsmarks, the German currency of the day that eventually stopped circulating because it became worthless and lost all of its purchasing power. Although it went to infinity in Reichsmark terms, the German stock market did drop inpurchasing power terms, which then and now can only be measured by using a different currency, such at the Dollar or theBritish Pound. Wealth was lost in a bear market in stocks in Weimar Germany just as it was lost in Japan’s bear market.

So which of these two outcomes will it be for the US stock market? As previously noted in these letters, I am leaning more and more to the Weimar Germany scenario. No fiat currency has ever survived so why should the Dollar be any different?

Do you think monetary turmoil can’t happen in this country? Well, it already happened with the colonial currencies and the Continental before the formation of the USA. In fact, those episodes with weak currencies explain why the Founding Fathers put the gold provisions in the Constitution in the first place. So because those sound money provisions began being ignored in 1933 and totally jettisoned by 1971, who’s to say that another currency disaster can’t happen here again?

Any way, whether the Dollar survives for much longer or not is another matter, but we can safely assume that the purchasing power of the Dollar will continue to be inflated away as it has year-in and year-out for the last sixty-seven years. What we therefore need to determine is whether stocks have peaked, and consequently, what will happen to one’s purchasing power by investing in stocks. Given that the purchasing power of the Dollar is being constantly eroded, it will be useful to look at stocks in terms of a currency other than the Dollar. I have therefore constructed the above chart in which the price of the Dow Jones Industrials is measured in terms of GoldGrams.

I used GoldGrams recently to measure oil prices (Letter No. 255). GoldGrams are the currency of my Internet venture now under development (www.goldmoney.com) that will enable gold to circulate in ecommerce. A GoldGram is one gram of Gold, and it currently exchanges for $9.05.

As can be seen on the accompanying chart, the Dow when viewed in terms of GoldGrams peaked at 1369 in July 1999. Since then, the Dow has been falling, so one has been losing purchasing power by being in the Dow (which I am using here as a proxy for the entire stock market) instead of gold.

Even as the Dow made a new high in January at 11,723, the Dow in terms of GoldGrams stopped at 1284, more than 6% below its all-time high in July. Is this divergence meaningful?

Yes, I think so. A divergence such as this one is a telltale characteristic of tops and bottoms. When different components fall out of synch with one another, it is usually a good sign that the major trend is changing. And I believe that this divergence is providing an important early warning signal.

The stock market is peaking when measured in terms of purchasing power. Consequently, an investor will be better off by cashing-out and putting the proceeds in gold, regardless whether the present bounce in stocks turns out to be a summer rally, or just another bear market rally.