May 15, 2000 – In recent letters I have been purposefully directing everyone’s attention to the Commodity Research Bureau Index. Though the components of this index were changed a few years ago, weighting it more heavily toward energy and less so toward agriculture, the CRB Index is still a very useful measure and important indicator of commodity price trends.

As we all know, rising commodity prices are a signal that inflationary pressures are building. Right now rising inflation is the message being given to us by the CRB Index.

I find this message particularly interesting at this moment in time. The CRB Index has in recent years largely fallen out of favor because of the conventional (but incorrect) wisdom that there is no inflation. But because a lot of people believe that inflation is not a problem, the CRB is largely being ignored.

I think this lack of attention to the CRB is yet another example of the need to use contrary opinion in one’s investment decisions. In other words, successful long-term investing (and sometimes even short-term trading) is more likely to occur when one goes opposite to the direction of the galloping herd, and right now, the herd is not looking for much inflation. So the herd is obviously not looking at the CRB.

In any case, the CRB had been stuck in a 206-218 trading range for several weeks. But in the last letter I advised that “things are about to change” and that “we will get the CRB Index above 218 within the next couple of weeks”. The CRB broke above 218 this past week, and closed Friday at 220.74, so from a purely technical point of view, this index now looks poised for a run toward 250. What’s causing the strength in this index?

Thus, the run-up in the CRB cannot easily be blamed on bad weather, poor crops or oil embargoes. We are seeing a fairly broad-based rise in the index, which can really mean only one thing – the Dollar is being inflated. And sure enough, a quick glance at the Federal Reserve’s balance sheet shows that even though the Fed pulled in the reins a little this past week, new credit over the past two months is being extended at a brisk rate. But this observation makes me ponder even more on the one thing for which I have no logical explanation. Namely, why has the Dollar remained so relatively strong?

Perhaps the tenacity of the Dollar to hold on for so long is a result of the tremendous flows from overseas into the US stock market. Another factor has no doubt been the huge corporate borrowings in recent months in Euro denominated bonds, in order to take advantage both of Europe’s relatively low borrowing cost and what has up to now been a weak currency against the Dollar. These borrowings have tended to suppress the Euro and strengthen the Dollar as the proceeds from these new debt issues were remitted back to the States.

Sooner or later though the Dollar is going to ‘fall out of bed’, and I don’t think it will be a very pretty sight when it happens. The Dollar is vulnerable, and when it falls, it will probably do so quickly and persistently. 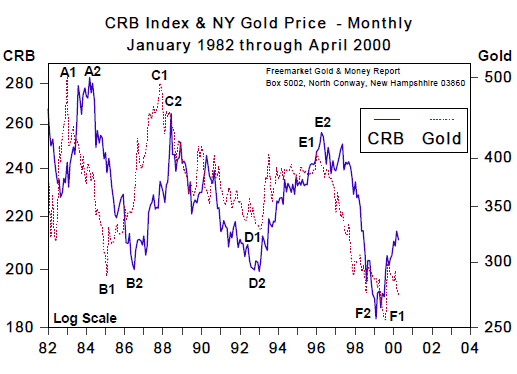 I’m watching the Dollar here also because of its impact on Gold. A weak Dollar should help the Gold price, as should a rising CRB also help it, which brings me to the above chart.

In the early 1990’s at points D and E, the relationship is less clear. I believe that hedging by mining companies and others who have borrowed and then sold Gold explains what caused the pattern of the CRB and Gold to change a little. But even with these distortions, the relationship nevertheless remained more or less the same – Gold leads and the CRB index follows. Recently, however, that pattern has changed noticeably.

Note the difference at point F compared to the other turning points on this chart. Gold is going nowhere, but the CRB is rising. In fact, this chart even understates the real difference between Gold and the CRB because it presents month-end prices only. At April 30th, the CRB was 211.03, and it is now 220.74, a 4.6% move while Gold has barely budged, and is up only 1.1% since month-end.

Given the above, it is logical to ask whether the historical relationship between Gold and the CRB Index has ended. I don’t think it has ended. Gold still is money, so it still is sensitive to inflationary pressures of the Dollar. So why isn’t Gold leading the CRB Index higher as experience and logic say it should?

Gold has stopped leading the CRB for the moment because the Gold price is being manipulated. That observation should not come as any surprise to the readers of these letters. Since 1997 I have been making the case in these letters that the Gold price has not been allowed to trade freely, and the above chart just provides more evidence of this proposition.

If Gold were trading freely here, it’s price would be a lot higher. In fact, just by looking at past patterns of Gold and the CRB Index on the accompanying chart, one can easily see that Gold should now be somewhere north of $350 per ounce, given the recent jump in the CRB.

In time, Gold will head higher. And as I have said several times already this year after Gold broke below support at $300, I think the big jump in the Gold price will probably begin in the last half of this year.