May 1, 2000 – A week ago both the stock and bond markets were jolted by an unexpectedly large jump in inflation. That there was any surprise from these latest reports seems strange to me. There are warnings of renewed inflation all around us.

Nearly every Wall Street economist says that inflation is under control. But don’t these people go to the gas station, heat their homes, or shop at grocery stores? Or watch home prices bubble-up ever higher? The evidence of worsening inflation is everywhere.

Both the Employment Cost Index (ECI) – considered by many to be one of the economic reports most closely watched by Alan Greenspan – and the CPI jumped at rates greater than had been widely predicted. The headline in The Wall Street Journal the following day reporting this news was: “Reports on Labor Costs and Prices Give New Warnings on Inflation”. Are you kidding me? ‘New‘ warnings on inflation? A more accurate headline would have stated that these two reports are giving more warnings of inflation.

Some examples that inflation is becoming a problem are obvious. Crude oil prices, though down from their recent peak, are still up 37.7% from a year ago. The CRB index, a widely followed indicator that tracks the price of 17 commodities, has risen 9.7% over the past twelve month period, and it has been posting a similar growth rate so far this year.

Notwithstanding all this evidence – and more that I haven’t even mentioned – supposedly inflation is not a problem. Why? Because everyone’s favorite inflation indicator says so.

We hear this mantra intoned so frequently, many have no doubt become very conditioned to it. Wholesale gasoline prices are up 12% this year, but so what. The Gold price is going no where. Wage pressures have been rising for months, usually a sure sign of inflation. But the price of Gold says it isn’t so.

This argument about the infallibility of the price of Gold as an inflation indicator seems compelling because it has been very useful in this regard in the past. But the logic of the argument that Gold is not providing any inflation threat rests upon two major assumptions.

First, one has to assume that the price of Gold today is an accurate and fair reflection of its true freemarket price. We have to assume that the price of Gold is not now being manipulated, because only if Gold is allowed to trade freely in response to its own supply and demand factors will it give us today, as it has normally given us in the past, those reliable signals about resurgent inflation.

The second assumption underlying the logic of using the Gold price as an inflation indicator is that the price of Gold is an unchanging measure. In other words, we have to assume that Gold can neither be undervalued nor overvalued for it’s inflation forecasting ability to be consistent, and therefore useful, over long periods of time. If Gold sometimes is undervalued and overvalued at other times, then adjustments have to be made to the price of Gold in order to make it a consistent measure that transcends time.

While my first point is open to subjective judgement and to different interpretations about whether or not the price of Gold is being manipulated, the second argument is irrefutable. Namely, the price of Gold is not the same thing as the value of Gold, which like any other good, commodity service or product, can at any moment in time become overvalued or undervalued.

Consequently, it is not the ‘price’ of Gold which is a good inflation measure. It is the ‘real’ price of Gold that can be useful in determining whether inflation is a threat or not. More importantly, a comparison of the current price of Gold to its real price will give some indication about whether or not Gold is under or overvalued. The accompanying chart enables us to make this judgement about Gold’s relative value. 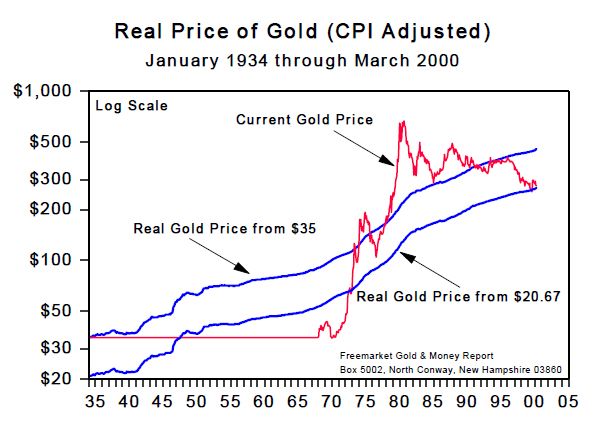 There are three lines on this chart. One is the price of Gold expressed in current Dollar terms. The other two roughly equidistant lines measure the real price of Gold by using the CPI to calculate the Dollar’s loss of purchasing power.

The top line begins at $35 per ounce, the rate of exchange between Gold and the Dollar after President Roosevelt devalued the Dollar in January 1934. The bottom line also uses the CPI to determine the real price of Gold, but it instead begins at $20.67, the pre-1934 Dollar/Gold exchange rate that had become unsustainable because the Dollar had been so terribly debased. It was this debasement that forced the hand of President Roosevelt, who judged the old rate of exchange to be no longer viable. He then devalued the Dollar.

I recommend using both of them. Referring again to the Page 1 chart, it is obvious that when Gold falls to or below the bottom line, Gold is very good value, even undervalued. When Gold rises to or above the upper line, it is becoming overvalued. We can therefore use this chart to make a judgement about whether or not Gold is good value and should therefore be accumulated. And what does this say about inflation?

Forget about the current price of Gold. Look at where the price of Gold should be as determined by the CPI. Just as $20.67 was too cheap and unsustainable in the early 1930’s, so is today’s $268 CPI adjusted price signaling that Gold at $273 is undervalued. But if $454 seems high to you, then a mid-range price of $361 is inarguably a reasonable measure of inflation. That fact the Gold is below this $361 price is only an indication that it is out of favor and/or its price is being manipulated – it is not any signal that inflation under is control.