The Labor Department on Friday reported that headline unemployment in the United States has now climbed to 10.2%, a 26-year high.  I use the word “headline” purposefully because the true unemployment rate is much higher.

If discouraged workers who have stopped looking for work and other similar categories excluded from the headline number are added back in (which calculation is provided in the Labor Department’s U-6 report), then unemployment is 17.5%, which is approaching levels last seen during the Great Depression.  It is further evidence – to confirm a point I have already made – that we are moving into another Great Depression.

This outlook of course conflicts with the so-called “jobless recovery” scenario being bandied about by various politicians and policymakers and dutifully trumpeted by the mainstream media.  Like many things coming from Washington D.C. these days, it cannot be believed.

A true economic recovery must of course be fueled by job creation.  Personal income and then in turn, personal spending is the driver of economic activity.  If people are losing jobs – as has been the case now for 22 straight months, the longest stretch on records dating back 70 years – they do not have employment income, and as a consequence, their spending will be curtailed.  So a “jobless recovery” is nothing more than a figment in the mind of the clever spin-meister who created that term.  It is, at worst, propaganda, which alienates people and further reduces the credibility of politicians and policymakers.

Here’s how John Williams of ShadowStats.com describes this current slump and highlights the importance of personal income: “The most severe economic downturn since the onset of the Great Depression continues…the downturn is structural, tied to consumer income growth failing to keep up with inflation. The traditional offset to weak income issues in recent years has been encouragement of consumer debt expansion. Such debt expansion, however, is not available at present, at least not in quantities that would support an expanding economy.”

It is worth noting that this jump in the unemployment number above the 10% threshold marks only the second time such a move has occurred since World War II, as is clear from the following chart from Chart of the Day. 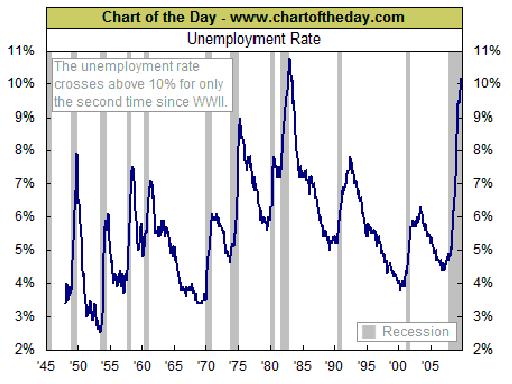 Since the start of the current recession in December 2007, the number of unemployed has increased by 8.2 million, and here’s another interesting point.  Last week before the unemployment report was released, I was speaking at a conference with renowned economist Nouriel Roubini.  He made the observation that the average workweek is now 33.0 hours because many firms have reduced the number of hours being worked in order to avoid laying off even more people.  These reduced hours, according to Dr. Roubini, have spared another 3 million jobs that would otherwise have been lost.

There is one more chart worth looking at.  It is from The Oil Drum and highlights the severity of current job losses against other economic downturns. 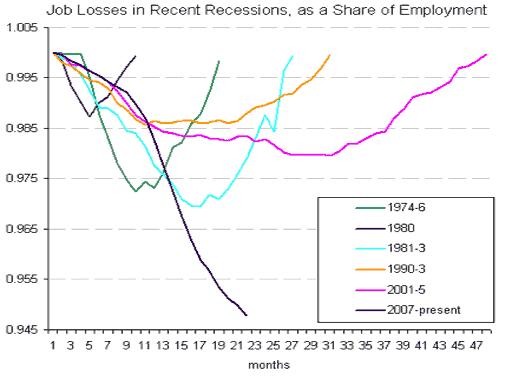 It is clear that the US economy is in an economic downturn without comparison in the post-World War II period.  And until employment once again starts growing, economic activity will remain subdued.  Sadly, there are few signs that employment is about to start growing anytime soon.