March 22, 2010 – Only a few decades ago, the United States was the world’s largest creditor nation.  American capital spanned the globe financing all types of investments in virtually every country.  But that dominance began to erode in the 1960s because growth in consumption in the United States was starting to outpace new production.  Wealth built up over generations was being consumed.

To compensate for the resulting decline in living standards, the nation turned to debt, rather than hard work and savings.  This trend continued through the next decade.  A focus on consumption and a seemingly unstoppable reliance on debt at all levels of American society had become the dominant force in economic activity.

By the 1980s, the inevitable happened.  As generations of accumulated wealth disappeared, a line was crossed.  America now owed more to the rest of the world than the world owed to it.  The United States had become a debtor nation, and it has continued to run up the tab in the decades since.

The mindset of policymakers today continues to be one of debt and consumption instead of savings, investment and production.  We see this way of thinking in their pronouncements and actions.  Worryingly, the tipping point appears to have been reached.  Not only is the United States living beyond its means, it is now borrowing beyond its means, as graphically illustrated in the following chart prepared by Nathan Martin. 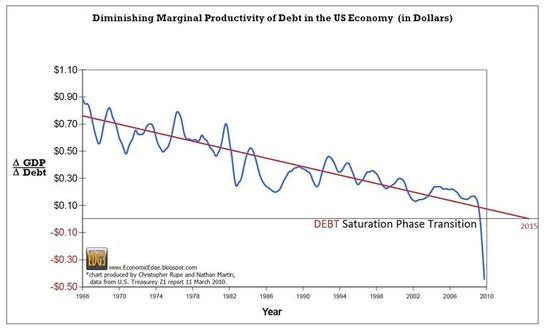 Here’s is how Mr. Martin explains the crucial message from this chart.

“This is a very simple chart. It takes the change in GDP and divides it by the change in Debt. What it shows is how much productivity is gained by infusing $1 of debt into our debt backed money system.

Back in the early 1960s a dollar of new debt added almost a dollar to the nation’s output of goods and services. As more debt enters the system the productivity gained by new debt diminishes…[but now] total income can no longer support total debt.  In the third quarter of 2009 each dollar of debt added produced NEGATIVE 15 cents of productivity, and at the end of 2009, each dollar of new debt now SUBTRACTS 45 cents from GDP!”

The US is digging itself into a hole, and if the message in the above chart was not clear enough, another bell tolled last week.  Moody’s warned that the triple-A credit rating of the United States is at risk of being downgraded if the nation fails to come to grips with its growing debt.  It warned:

“Preserving debt affordability at levels consistent with Aaa ratings will invariably require fiscal adjustments of a magnitude that, in some cases, will test social cohesion.” [Emphasis added]

It is an unusually stark assessment with profound implications that require thoughtful attention.  Debt has always been and will always be a two-edged sword.  Iceland now knows that lesson well.  So do Dubai and Greece.  Other nations – including the United States – are about to learn that lesson too.

As I see it, a lot of the federal government’s promises are about to be broken.  The collapse of the once almighty dollar is rapidly approaching.