A number of key factors have fallen into place over the past couple of weeks. Unfortunately, together they increase the probabilities that the US dollar is headed toward hyperinflation.

These factors include four of the five key points that I highlighted in my last letter:

1) T-note yields have risen to 3.45%, shattering previous resistance in the 3.12%-3.15% area. But buyers are not only requiring higher yields in order to offset the inflation risk. The potential downgrade of the UK sovereign debt rating last week highlights the risk that other spendthrift nations with too much debt – and particularly the US – might also be downgraded. So buyers of US Treasury paper are now also requiring higher yields to offset the growing default risk. The risk of course is not that the government will fail to repay its debts. Rather, the default arises from repaying the debt in depreciated currency, the purchasing power of which has been gutted by inflation. Here is what Richard Fisher, president of the Federal Reserve Bank of Dallas, says about this monetary phenomenon in today’s Barron’s: “Throughout history, what the political class has done is they have turned to the central bank to print their way out of an unfunded liability.”

2) The gold/silver ratio dropped below critical support in the high 60s. Silver is outperforming gold, which is a clear signal that money is moving into the precious metals to obtain safety from the growing inflationary risk.

3) The XAU Gold Mining Index climbed through resistance in the 134 area. The market for gold mining stocks (like the silver market) is not as deep as it is for gold itself, and is thus more sensitive to money flows. Therefore, the mining stocks (like silver) are leading gold as money comes into the sector in anticipation of higher precious metal prices.

4) Federal spending continues to explode, with GMAC now lining up for government hand-outs. Remember, hyperinflation invariably results from too much government spending that leads to too much government borrowing. These debts are then turned into currency by the government’s captive central bank, which describes exactly what is happening in the United States today.

The only factor I noted in the last letter that has not yet fallen into place is the gold price. Gold has not yet broken above $1,000. But it did break above resistance in the $915 area, notwithstanding the determined fight by the gold cartel to contain gold below that price. As I have noted time and again, gold is the ultimate ‘canary in the coalmine’. Higher inflation is always preceded by a higher gold price – always. Nevertheless, the gold cartel attempts to fight this reality with its market interventions.

Aside from gold and the other above points, I am also watching the stock market closely to provide clues that hyperinflation is imminent. Most stocks rise in a hyperinflation as holders dump the currency and buy anything tangible or near-tangible, like equities of companies that own tangible assets. For example, Zimbabwe’s stock market generated the best percentage gains in the world last year. 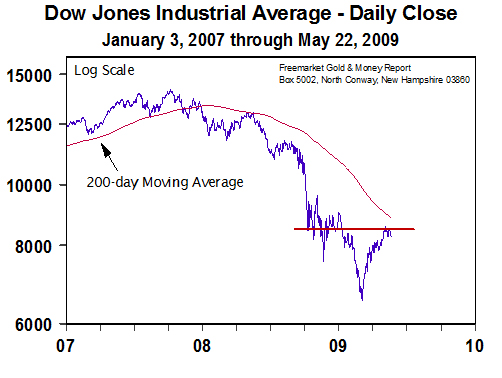 The first chart above shows that the Dow Jones Industrials has climbed from the March low back toward its 200-day moving average. It has for now been stopped by resistance around 8200. If the US dollar is destined for hyperinflation, the DJIA will take out the 8200 level, and then move back above its 200-day moving average, currently at 8844 and falling about 15 points per day. 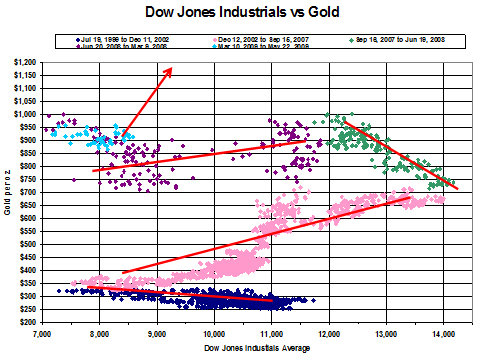 The second chart will be familiar to readers because I have presented it before. This chart shows the correlation between the DJIA and gold. There are several clear cycles on this chart (each one in a different color), showing that gold and the DJIA have been both positively and negatively correlated.

I believe that the latest cycle (light blue dots) began from the low that the DJIA made on March 9th. The red arrow points toward the direction the correlation of the DJIA and gold will take in a hyperinflation. Both gold and the DJIA will rise, although I expect that gold will climb at a much faster pace. In other words, it is better to own stocks than currency in a hyperinflation, but gold will outperform stocks by a wide margin.

Lastly, I expect that the hyperinflation will unfold quickly. Recent events suggest that my timetable for the beginning of hyperinflation by the end of this year or the first quarter of 2010 remains a reasonable target.

The early stages of a currency collapse are usually accompanied by a collapse in economic activity. The US is clearly following that pattern.

During this stage, the velocity of money slows noticeably because of the strong propensity to save money during an economic collapse. I learned this point from a trip to Argentina in 1991 when its currency – the austral – was starting to collapse. When the velocity of money eventually quickens, the currency has reached a tipping point – the desire for saving money is outweighed by the need to dump the currency because its purchasing power is being eroded by rising inflation. Also, worry grows about the currency’s safety because of the prospect that inflation will get worse.

The tipping point had already been reached for the austral when I was in Argentina in May 1991. In January the exchange rate was 16 australs to the US dollar. When I arrived it had already climbed to 64 australs, and when I left several days later, it was 90 australs. By December it was 10,000 australs to one dollar. Even though Argentine interest rates were rising, the austral’s rate of exchange was falling, which brings up another key component I am monitoring in my ongoing hyperinflation watch.

Rather than watching the velocity of money, it is more important to watch the relationship between interest rates and the currency’s exchange rate. It is therefore significant in my view that the dollar is sliding lower even though T-note and T-bond yields are climbing.

Buying government debt and turning it into currency is the cause of hyperinflation, so falling dollar exchange rates is a normal response to the Fed’s actions. And the more Treasury paper the Fed buys, the lower the dollar will fall in the foreign exchange markets, and more to the point, the higher gold will rise.

The federal government is headed over the cliff. Don’t go over the cliff with it. Avoid the dollar and hold gold and silver instead.