Employment in this Current Depression

July 13, 2009 – The chart below  presenting total US employment over the past twenty years was prepared by the Economic Policy Institute. The EPI is a Washington-based think tank that focuses upon the interests of low- and middle-income workers, with particular reference to their economic condition. This chart and an accompanying article about the current employment situation can be found on the EPI’s website at the following link: www.epi.org 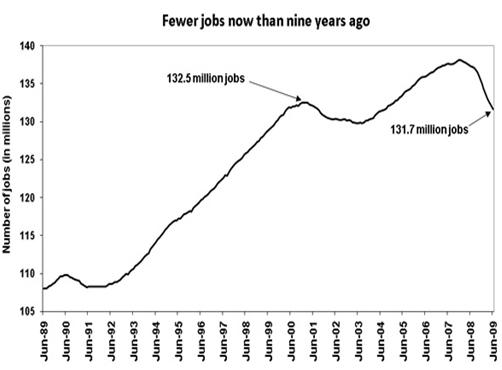 This EPI article identifies some important facts. “Since the start of the recession, the labor market has lost a total of 6.5 million jobs, down from 138.2 million in December 2007 to 131.7 million in June. As the chart…shows, the peak number of jobs after the expansion of the 1990s was 132.5 million jobs in February 2001. We are currently 838,000 jobs below that figure.”

The EPI then observes: “In fact, the entire growth in jobs over the last nine years has now been wiped out – the economy currently has fewer jobs than it had in May 2000 (when there were 131.9 million jobs).“

That observation is startling and is clear evidence of the depth of the current downturn, which is why I consider the present state of the economy to be in a depression and not a recession. Policymakers in Washington always put a gloss on everything, particularly in their attempt to spin (i.e., propagandize) an unpleasant reality. The truth is that the economy has not been in this bad shape since the 1930s.

Here is another piece evidence to support my labeling of the current state of the economy as a depression and validate my comparisons back to the 1930s. I found the following observation by the EPI to be shocking, but it makes clear both the importance of this chart as well as the EPI’s analysis above of the employment statistics.

“This is the only recession since the Great Depression to wipe out all jobs growth from the previous business cycle, a testament both to the enormity of the current crisis and to the extreme weakness of jobs growth over the business cycle from 2000 to 2007.”

The EPI then observes: “This decline [in employment since May 2000] was not occurring because the jobs weren’t needed – the labor force has expanded by 12.5 million workers since then, as the population continued to grow. Furthermore, the loss of 6.5 million jobs over the 18 months of this recession [correctly, a depression – ed.] dramatically understates the hole in the current labor market. To keep up with population growth, the economy needs to add around 127,000 jobs every month, so the labor market needed to grow 2.3 million jobs over this period. All told, the labor market is currently 8.8 million jobs below where it would need to be to maintain pre-recession employment levels…Furthermore, with less than one job opening for every five job seekers, unemployed workers are getting stuck in unemployment for long periods. In June, 4.4 million people, 2.8% of the labor force, had been unemployed for at least six months, surpassing the record high of 2.6% set in the early 1980s.”

Please refer to the following chart, which is from the Grandfather Economic Report.

Government is growing 4-times faster than the economy, which sadly is depressing economic activity and therefore jobs. A government job does not increase wealth, and it exists only because it was taken from the private sector. Worryingly, based on what is coming out of Washington these days, the employment situation is only going to get worse.

I was recently interviewed in “The Daily Bell”. The full interview can be found by clicking here.

The point I would like to draw to your attention from this interview is the following answer I gave in response to a question asking how we got into this mess. “There is an irrational belief in erroneous economic theories proposed by crank economists. Nothing has changed through the ages; people in effect still believe in alchemists and their flawed ‘science’, although the alchemy is cloaked today in modern day lexicon.”

These crank economists are more concerned about enhancing the power of the State than improving economic conditions. So the outlook remains bleak. As long as these crank economists are in command – and there is no indication that they are losing their grip on the levers of power in Washington – the outlook for jobs and economic recovery is poor. An economic ‘boom’ is always followed by a ‘bust’, and this one has a long way to go.