The Fear Index at 1%

Noverm 27, 2000 – Though I have not written about my proprietary Fear Index for awhile, I have not been ignoring this important indicator. I continue to follow its movement from month-to-month very closely, and I recommend that you follow it closely as well. For your convenience, I include the latest monthly value of the Fear Index as well as its 21-month moving average with the statistics in each letter.

The Fear Index remains my most important model for appraising and ranking Gold’s prospects. It is built upon a simple yet powerful concept – fiat currency such as the Dollar is fundamentally different from a commodity currency such as Gold. The reason is that fiat currency is a liability of some financial institution that emits the currency, so ultimately every fiat currency is based upon someone’s promise to pay. Commodity currency, however, is an asset, whose value can always be based upon the tangible use of that commodity. For example, Gold can always be melted into jewelry for use as adornment if it is no longer needed as currency, but try melting down Dollar bills or making rings or necklaces from them.

Generally speaking, when the Fear Index is rising, uncertainty about the Dollar is growing. From time to time because of events such as banking problems or inflation, people fear for the safety of their money, so they instinctively sell Dollars and move into the safety offered by Gold. Conversely, when the Fear Index is falling, any problems about the quality of the Dollar are not seen to be worrying, so wealth moves back out of Gold into the Dollar. These trends in the level of fear about the Dollar and its prospects are captured by the Fear Index, which I use in two ways. 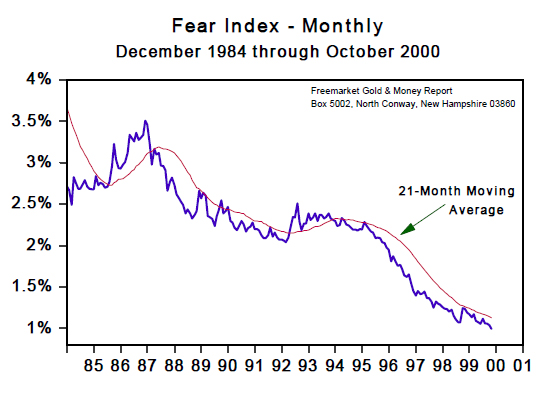 Although this chart only dates back to 1985, I have calculated the Fear Index monthly all the way back to 1913, the year that the Federal Reserve was formed. The historical evidence over this 87-year period shows that when the Fear Index is 2.7% or below, Gold is good value and should be accumulated.

The Fear Index has been below this 2.7% threshold since January 1989. Since then I have been recommending that Gold be accumulated by investors looking to acquire for what I call their strategic portfolio, an asset that is good value. Even during the 1993 rally, the Fear Index only climbed up to 2.5%. So during this rally which saw the Gold price climb about $80 from its low of $325, Gold still qualified for on-going accumulation, according to this 2.7% measure of value from the Fear Index.

These two conditions precedent for buying only occurred during two short periods on this chart, in 1986-87 and 1993-94. However, as one would logically expect, these buy conditions prevailed throughout most of the 1970’s.

In August 1997, the Fear Index did somethingunprecedented – it broke below its previous low formed in 1971 when the Dollar was still nominally linked to Gold. It was for me a surprising result because prior to that event, it seemed most unlikely that Gold could possibly reach a level that was even better value than it was at its 1971 price of $35 per ounce. But we know from the Fear Index that it has indeed happened.

At its August 1997 price of $324, Gold was better value than it was at $35 in 1971. In other words, because of inflation and debasement, 35-dollars in 1971 had better purchasing power than 324-dollars in 1997. What’s more, since August 1997 Gold has become even better value with each passing month because the Fear Index has remained below its 21-month moving average while continuing to work its way lower.

Presently the Fear Index is an unbelievable 1.00%. The calculations for October 2000 are:

The Fear Index is in uncharted territory, and it is impossible to predict where and when the Fear Index will stop. I had thought that it was forming a basing pattern since mid-1999. For this reason, I was looking for Gold to be rallying about now, with a $300-$325 year-end 2000 target. But the new low in the Fear Index made that projection questionable, which confirms some observations I have discussed in recent letters about Gold’s weak trading action, such as its inability to probe over-head resistance around $282.

While no one can predict when the Fear Index will turn, there is one useful measure that can be determined. We can calculate what Gold price is needed for the Fear Index to reach its 1971 low of 1.63%. That price is $432.

It seems hard to believe, but at $432 Gold would be no more overvalued than it was at $35 in 1971, which we all know was up until now, the lowest valuation ever seen for Gold. In other words, at the moment Gold is very, very cheap indeed. But there is a flip side to this coin to consider. Overvaluations can also reach an extreme.

Though prices are indeed unprecedented, more important to me are the measures of valuation, or overvaluation to be more precise. For example, prior to the 1987 stock market crash, the dividend yield on the Dow Industrials was 2.72%, which was up until that moment in time unprecedented. Never before had there been such a low dividend yield, until the recent years of this bull market.

When the Dow peaked this January, the dividend yield was a minuscule 1.52%. It has since jumped back to 1.72% as the Dow Industrials have fallen from their January peak.

While still below normal levels, the important observation is that the dividend yield on the Dow Industrials has been rising. It is doing what everything eventually does when it comes back to basic market action – it is reverting to the mean. And this is the basic conclusion we can make about the Fear Index. It will eventually revert to its mean.

The above calculation assumes that the US Gold Reserve and M3 remain unchanged. However, the trend for decades has been for the Gold Reserve to shrink and M3 to grow. So if these trends continue, their effect on the above formula will mean that an even higher Gold price is required for the Fear Index to reach its mean.