What is Gold Worth?

November 13, 2000 – To ask what something is worth is to ask a question that will result in a lot of different answers. After all, we are all aware of the self-evidently truthful adage that one man’s junk is another man’s treasure. So something’s worth – its essential value – is determined by each individual’s subjective, and usually very personal, point of view. For this reason I don’t agree with people who believe gold has a so-called intrinsic value.

These people assume that because gold is mined in an often labor intensive and usually risky environment, this cost of extraction gives it intrinsic value. I wholeheartedly disagree. Labor does not give an object its value, nor is value intrinsic.

For example, an artist could spend countless hours on a painting that is, at the end of his labors, unmarketable. The painting does not have any intrinsic value just because the artist used his labor to create it. His ‘treasure’ may prove to be ‘junk’, and therefore without value, in the view of everyone else.

Value is not derived from the object itself nor from any so-called intrinsic worth. In our modern day world, value is wholly determined – except perhaps for hermits or a Robinson Crusoe – in only one way, namely, by what one can receive in exchange for an object, good or service. In our society, human interaction gives things their value, and this value is in turn based upon how useful the market perceives that good or service to be. A case in point is crude oil.

If you happened to discover crude oil gushing out of a patch of ground that you might have struck with a hoe back in the 18th century, you were out of luck, or viewed another way, a century too early. Crude oil had no usefulness back then, and no value. In fact it was a nuisance, so much so that you had to go start digging with that hoe somewhere else to plant your garden. Of course all that changed by the time John D. Rockefeller came on the scene, whose Standard Oil fortune was initially built upon the use of crude oil refined into an oil used for lighting.

From those early beginnings, crude oil’s importance grew as its usefulness grew. By the early twentieth century with the advent of the gasoline powered engine and the automobile, crude oil became useful when refined into gasoline, and over the years since then, a variety of newly developed applications (we don’t use it for lighting anymore) have kept crude oil useful to this day. It is also likely to remain useful for the foreseeable future, but things do change, as buggy-whip makers discovered. Snuff makers learned that lesson too. And the market’s perceived usefulness of crude oil may also change at some future date, but for now, it remains as useful today as it has for the past fifty years. Consequently, because it is useful, crude oil has value. 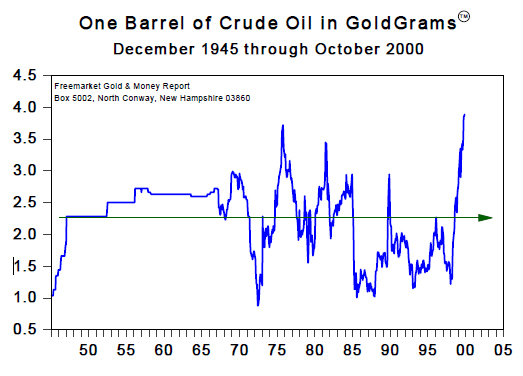 Is it accurate to state that crude oil is 28.3-times more useful today than it was in 1945 because one barrel of crude oil now costs 28.3-times more Dollars? No, of course not. There are two problems with this simple – and inaccurate – conclusion.

First, usefulness alone does not determine the price of some good or service. The price of crude oil is a function of the demand for crude oil and the supply of crude oil. No matter how useful crude oil may be, its demand may drop if a constrained or limited supply makes crude oil too expensive, and these factors of supply and demand will determine crude oil’s price.

Second, the Dollar is not a good measure of value. It’s purchasing power is being constantly inflated away, so it is clear that one 1945-Dollar purchased back then a lot more than one 2000-Dollar purchases today. We could adjust for this loss in purchasing power by using the Consumer Price Index, but this result is not wholly satisfactory either.

This CPI adjustment shows that the barrel of crude oil that cost $1.17 in January 1945 should today cost $11.19. However, before you jump to the conclusion that crude oil is outrageously priced today at $33.08, there are two things to consider.

First, the CPI is not a good measure of the Dollar’s loss of purchasing power. I’ve discussed this point before in these letters, and it is beyond the scope of the matter at hand to explain this point in detail again. But basically, the CPI significantly understates the loss of Dollar purchasing power.

The second point is that perhaps crude oil was unduly cheap in January 1945 at $1.17. Perhaps this price was caused by too much supply and/or too little demand at that moment in time, and as a result, that moment in time is not representative of crude oil’s usefulness over a longer period of time. If so, then $1.17 is not a good point at which to begin making comparisons. To overcome these two problems, I have prepared the above chart as a way of presenting a practical and useful measure of value. This chart in effect compares the value of gold to the value of crude oil. The important point is that this chart presents the relative value of gold and crude oil compared to each other over a fifty-five year time span.

Note that at times gold is more valuable than crude oil, when approximately one GoldGram purchased one barrel of oil. At other times note how relatively valuable crude oil was when it took more than 3 GoldGrams to purchase one barrel.

Generally speaking, this chart is a good indicator of relative value. There are four forces at work on this chart – the supply and demand for crude oil and the supply and demand for the money, in this case gold, being used to measure purchasing power and determine crude oil’s relative value over a long period of time. The interaction of these four forces determines gold’s relative purchasing power and crude oil’s relative price.

Sometimes the supply and demand of crude oil and gold favor lower crude oil prices and higher gold purchasing power. Sometimes the opposite occurs. When that happens the four forces of supply and demand for both of these useful products mean that the price of crude oil is relatively expensive, and the purchasing power of gold is relatively low. We are currently at one of these moments in time when gold purchases relatively little. At present, it takes 3.892 GoldGrams to purchase one barrel of crude oil, which is a record high. This condition provides another reason why this chart is useful.

There are clearly evident on this chart several volatile swings in crude oil’s price and gold’s relative purchasing power. But these swings are to be expected because they are a natural result of changing supply and demand, which highlights the important point. These swings are just that – swings. Sometimes they swing up and sometimes they swing down, but over the fifty-five year history of this chart, the supply and demand of gold and crude oil always eventually revert to the mean. In this case the mean is 2.233gg (GoldGrams) to purchase one barrel of crude oil, which is shown on the chart as the horizontal arrow.

So what will it be? A lower crude oil price to $19.98 per barrel with gold unchanged? Or crude oil unchanged with the purchasing power for gold at $460.64? Or perhaps something half-way in between so that the chart reverts to the mean with crude oil price falling to $26.03 while gold’s rate of exchange to the Dollar climbs to $362.67? Or will perhaps the fifty-year history of this chart go ‘out-the-window’ with the price of crude oil becoming even more expensive (i.e., above 4gg per barrel of crude oil) before this chart eventually reverts to the mean?

No one today has the answer to these questions, but we do have one important insight from this analysis. Gold is very cheap relative to crude oil, so the safe way to use this chart in the expectation that it will eventually revert to the mean is to buy gold and to sell crude oil. In other words, the price of gold is unlikely to fall from here, even if the price of crude oil falls from its current level.

This conclusion, however, is at odds with my basic outlook for crude oil, as I expect its price in Dollars is likely to rise further – and probably to above $40 per barrel – given the generally bullish fundamental picture for crude oil’s current and projected supply and demand. Therefore, unless gold rises faster in Dollar terms than the price of crude oil rises, their relative value will move even further from their historical mean, which I think is an unlikely occurrence. As a result, this analysis suggests that the price of gold is not only ready to rise, but that it will rise faster than any increase in the price of crude oil.