May 30, 2011 – Bull markets do not move in a straight line, nor do the price of gold and silver.  Their price advances, and then retreats to ‘correct’ the previous advance. For the past four weeks, gold and silver have been going through one of these periodic price corrections.

During these corrections, underlying support is tested.  If support holds, precious metal prices eventually climb higher, putting in the rear-view mirror the prices reached during the test of support as well as the correction itself.

This pattern of ebb-and-flow has recurred time and again over the past ten years, during which time both gold and silver have achieved spectacular price appreciation.  Some corrections have been long and deep, like the one that occurred after the Lehman Brothers collapse.  Others though have been short and shallow.  But they all have one common characteristic.

The depth and length of a correction cannot be predicted.  All we market participants can do is let the correction run its course, while continuing to accumulate the precious metals as part of our ongoing accumulation plan to cost-average our purchases.

To explain this point, gold and silver prices normally move in synch.  Both advance, or both decline.  What is of interest is when one metal moves in one direction to achieve a new price, while the other metal does not confirm.  So for example, if gold makes a new high and silver does not confirm with its own new high, a bearish divergence has formed, signaling that a price advance may be ending and a correction may be starting.

Conversely, when one metal makes a new correction low and the other one does not confirm, a bullish divergence has formed.  It is an indication that a correction is ending. 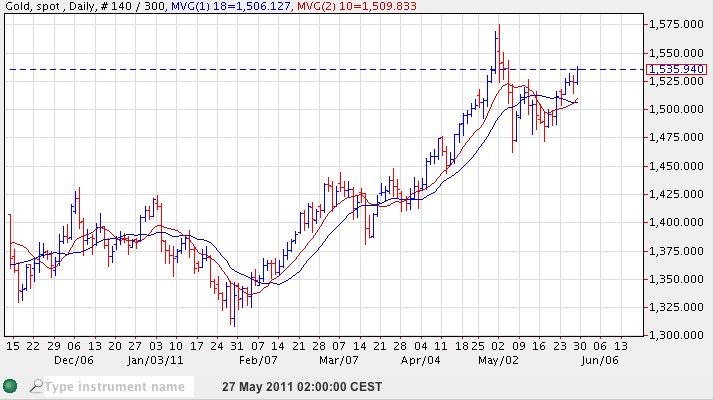 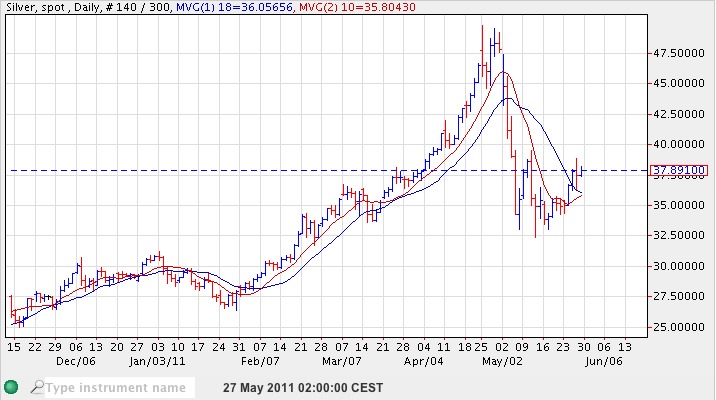 Several observations can be made about the above charts:

1) From their late January low, both metals moved higher together more or less in synch.

2) Both gold and silver began their correction on the same day.  In the initial drop, gold made its low on May 5th, but silver kept falling and made its initial low one day later on May 6th.  It was a small bullish divergence because gold did not confirm the new low in silver, and both metals subsequently bounced higher.

3) The precious metals then re-tested their previous low.  Silver fell to a new low in the setback on May 12th, but gold did not confirm.  This was a second bullish divergence, and more meaningful than the first one a few days earlier for the simple reason that gold’s initial low price was still holding firm and had not been broken.

So gold and silver have formed what promise to be important bullish divergences signaling that the correction may have run its course.  Here’s another way to look at what has happened.  The selling in a precious metals correction can be compared to a prize-fighter at the end of a tiring bout.  He is punched-out, and can hardly fight anymore.  A divergence says the same thing.  In effect, the downside momentum has ended because the sellers no longer have any ‘punch’ left.

There is one other item worth noting in the above charts, and it too is bullish.  Look at the depth of the correction in silver compared to that of gold.  Silver retraced more than half its gain from the January low, but gold hardly retraced any.  What’s more, gold is now just a chip-shot away from making a new record high.  This relative performance is itself an important bullish divergence.

So taking it all together, there are clear signals that the correction in the precious has ended.  In other words, the low in gold and silver reached earlier this month marks the bottom of the correction.   There may be more testing of support around $1500 and $35, which would not be unusual.  There may even be more bullish divergences.  But look favorably at the bullish divergences already formed because they in essence are saying that the correction may be ending, and more to the point, that the long-term bull market in the precious metals remains intact.

Lastly, the eagle-eyes among you may have noticed the bearish divergence on the above charts.  Gold made a new high on Friday, April 29th, but silver did not confirm.  A nasty correction began the following week.

In summary, spotting divergences is a worthwhile endeavor.  Like everything else when it comes to markets, divergences are not foolproof.  But they are a useful analytical technique that everyone can use to help keep their eye on price trends in a bull market.