In an interview on July 8th in King World News I noted how gold that day had slipped into backwardation. Since then I have read a lot of commentary on various websites about backwardation, which made clear to me that this term and, more importantly, the implications to the gold price when backwardation appears are widely misunderstood. So I have prepared this brief note to explain backwardation, of which there are two types – money backwardation and commodity backwardation, and as I explain below, both apply to gold.

The following table presents the dollar’s exchange rate against the euro and British pound for different time periods ranging from spot to one year in the future. These future prices in the over-the-counter market are called “forwards”. These prices were taken from the July 26th Financial Times.

Thus, backwardation and contango are a mathematical result that reflects the cost of money (sometimes called the “cost of carry” or the “time value of money”), as measured by the interest rates of one currency relative to another. But this observation leads to a bigger and more important question that needs to be answered. Why are euro interest rates less than those of the dollar, while pound interest rates are higher than both of these currencies?

Again, the answer is straightforward. Interest rates are a reflection of risk. The interest rate structure in the above table implies that the pound has a higher interest rate because it is more likely to be debased by government and central bank policy (i.e., lose purchasing power) than the dollar, which itself is more likely to be debased than the euro. Carrying this concept one step further, the pound is in contango (as are the dollar and euro) against the Indian rupee and South African rand for example, both of which have higher interest rates than the pound because they have a greater risk of being debased by government and central bank mismanagement.

However, the interest rates of all national currencies need to be viewed cautiously. As Chris Powell of GATA.org famously declared in 2008: “There are no markets anymore, just interventions.” So rather than being a reflection of true market conditions, interest rates today result from heavy-handed central bank manipulations, thwarting real and accurate price discovery by the market.

Central banks, however, can only push so far before market forces prevail, a limitation often described as “pushing on a string”, which explains why the rupee and rand interest rates remain relatively high. If those countries’ central banks tried to lower interest rates, holders would sell the currency causing its exchange rate to drop because at lower interest rates the risk of holding those currencies would be perceived as being too great relative to other opportunities to place one’s liquid capital (i.e., their money). Thus, there are limits to what central bank intervention can accomplish, or in other words, the body of people we call the “market” stands as a guardian that carefully watches central bank tinkering and responds to it by moving their money around to better suit their risk preferences.

Importantly, market forces overpowering central bank manipulation can explain what is now happening in gold. The US government does not want gold to go into backwardation because it means that people would rather hold physical gold than dollars, which undermines the power that comes with being the world’s reserve currency. But as we can see in the following table that presents the US dollar spot gold price and forwards against gold, market forces are prevailing to some extent over the Federal Reserve’s attempts to control interest rates. 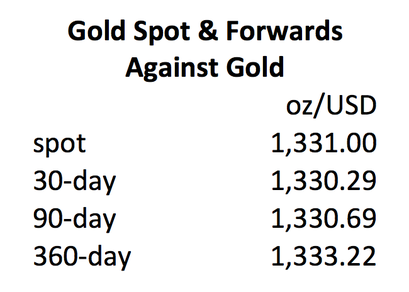 Like the euro, pound, dollar and all the other national currencies, gold has an interest rate (usually referred to as gold’s “lease rate”) at which it is borrowed or loaned. Gold has an interest rate because it is money, which is a statement that may surprise some people. But gold did not stop being money after 5,000 years just because in 1971 governments, central bankers and some economists said so. The best this group could do was confuse, obfuscate and mislead to perpetuate their myth that gold had been demonetised. As a result, central bankers today call gold’s interest rate by a politically correct term, its “lease rate”.

We can see that gold is in backwardation 30 days and 90 days forward, but in contango one year in the future. Also, the backwardation is deeper 30 days forward than for the 90-day period, but it is backwardation nonetheless. This means that gold’s interest rates for 30 and 90 days are higher than those of the dollar for these durations, which leads to one remaining question that needs to be answered.

Given that interest rates reflect the risk of debasement, and that physical gold cannot be debased as national currencies are debased by ‘printing’ too many of them, how can gold’s interest rate be higher than those of the dollar?

The answer is that it cannot, or at least not in a market unfettered by government intervention. Gold backwardation is an abnormal condition, but theory and practice are different things. It is extremely rare for gold to be in backwardation, but it does happen when governments intervene in the market process.

More to the point, gold is money because it is accumulated. Essentially all the gold mined throughout history exists in its aboveground stock, whereas commodities get consumed and disappear. They are not money, as I explain in The Aboveground Gold Stock: Its Importance and Its Size.

Until now gold backwardation has only happened two times since this bull market in gold began back in 1999, and each prior occurrence lasted only a few days. In both instances market forces briefly overpowered government interventions aimed at manipulating interest rates. So gold backwardation does occasionally occur in spite of government intervention because central banks cannot ‘print’ physical gold to alleviate demand pressures.

Amazingly, gold has remained in backwardation against the dollar since my KWN interview. The duration of this backwardation is unprecedented in the 4+ decades that I have been following the gold market. Clearly, something noteworthy is happening, which I believe in turn is signalling that something significant may yet happen. An indication of what that event may be can be discerned from the definition of backwardation on the LBMA website:

Backwardation – A market situation where prices for future delivery are lower than the spot price, caused by shortage or tightness of supply.

Clearly, the LBMA is defining commodity backwardation, and not the backwardation that occurs between different monies as a result of interest rate differentials. But their definition can be applied to physical gold, which is both money and like commodities, a tangible asset. A “shortage or tightness of supply” means that unless demand slackens or supply increases, the price must rise. Given the strong demand for physical gold at the moment, a decline in demand at current price levels seems unlikely.

In contrast to national currencies, the supply of which can be increased to any quantity by mere bookkeeping entries, physical gold comes from two sources – new mine production or the existing aboveground stock. But mine production is relatively fixed. As I explain in The Aboveground Gold Stock: Its Importance and Its Size, the aboveground stock of gold grows consistently year after year by 1.8% per annum, which is not rapid enough to satisfy current demand.

Consequently, the present “shortage or tightness of supply” of gold can only be relieved from its existing aboveground stock. The only way for that to happen is for the gold price to rise high enough to entice people to exchange their physical metal for dollars, which is what happened the last two times gold was backwardated.

In summary, when gold backwardated in 1999 and in 2008, it marked important lows and key turning points in the gold price, which thereafter began multi-year uptrends. I expect the same outcome to be repeated now given that gold is once again in backwardation.