August 17, 1998 – The Gold price and the general level of commodity prices are inexorably linked. The reasons for this relationship are hotly debated, but to me the answer is obvious – Gold is money. This debate about prices would disappear if Gold, instead of the Dollar, was used for economic calculation, namely, to record prices and measure purchasing power.

For example, on Friday crude oil closed at $13.35 per barrel, while Gold ended at $283.90. Therefore, one ounce of Gold could purchase 21.3 barrels of oil. So what, you say? Well, in 1965 Gold was $35 while crude oil could be purchased for $1.70 per barrel, which means that one ounce of Gold back then purchased 20.6 barrels, about the same as today. Ergo, Gold and commodity prices are inexorably linked, but this relationship can be misunderstood if prices are viewed in Dollar terms because the purchasing power of the Dollar is being eroded over time by inflation and the loss of exchange value against the other major national currencies.

This conclusion about Gold’s ability to lead commodity prices can be seen on the accompanying chart, which uses the Commodity Research Bureau Index as a proxy for commodity  prices in general. The chart presents both the Gold price and the CRB Index since 1982. 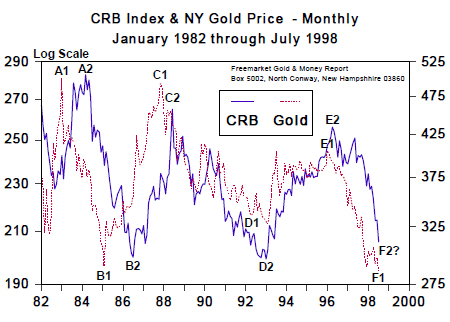 In the early 1990’s, however, Gold seemed to lose its ability to lead the CRB Index. Look at the two points marked “D”. Gold continued to move lower after “D1” was formed, and even after the CRB Index began to rise. Is there a reason for this aberrant behavior? Yes, I believe so.

It was the early 1990’s when forward selling from mining companies added greatly to the weight of Gold that needed to be absorbed each year by the marketplace. Consequently, the Gold price was distorted to artificial levels (i.e., it was too low), so Gold was unable to lead as it normally does.

Similarly the relationship of Gold and the CRB Index was also distorted at “E1” and “E2”. Had the weight of forward selling not been added to the market in 1995-96, the Gold price in my view would have been much higher – something nearer to $450 would have been much closer to the historical Gold/CRB relationship, given the level reached by the CRB Index at that time. In any case, Gold thereafter began to fall, once again leading the CRB Index, which brings us to the present.

The point marked “F1” shows the recent low in the Gold price. Though Gold reached its daily closing low on January 12th, based on month-end prices Gold ended July at its low for the year. The CRB Index is also at its low point for the year.

Are prices about to turn upward from here? Yes, I think so. But again the Gold/CRB relationship needs some explaining, this time because the Gold price has been distorted from central bank dishoarding, rather than forward selling from the mining companies.

I have made the point repeatedly in these letters in recent months that the Gold price has been adversely affected by the weight of Gold added to the market by central bank dishoarding. The Belgians are partly responsible, but I also believe the Dutch, prior to the formal launch of the new European currency, have been dishoarding most of their Gold, even though nothing has yet been announced by them. The weight is probably 500-700 tonnes (see Page 4 for my current thinking on this matter).

Consequently, I believe the January 12th low marks Gold’s bottom, but Gold has so far been unable to rally because of the onslaught of European dishoarding, both announced and yet to be announced.

If my analysis is correct, we can conclude that Gold and the CRB Index are about to once again resume their normal historical relationship, with Gold leading and the CRB Index following. Gold will rally from here, and the CRB index, which is probably close to bottoming (remember, it has already twice bottomed around the 200 level at “B2” and “D2”), will begin rallying around the end of this quarter or in the fourth quarter at the latest.