Which of Two Roads?

July 27, 1998 – Beauty or beast? Either of these adjectives can apply when it comes to the stock market. At times the market is something wonderful to truly behold, to ponder with the greatest of admiration. At other times, the market can be your worst nightmare – like it was last week. A frightening and alarming 4.3% was chopped off the Dow Jones Industrials Average in the space of five short days.

Of course the Dow is still up a very generous 13.0% year-to-date. But this gain may offer little solace to the many shareholders who own stocks that have done very little this year, or even worse, have actually dropped. For while the Dow, S&P 500, and Nasdaq are up for the year, the advance has been narrow and selective, and for the most part has been dominated by the new Nifty-Fifty, a group of fifty stocks with some of the largest market caps.

As one indication of what is happening to the majority of stocks, the indices that measure small market cap stocks, like the Russell 2000, are barely changed for the year. In short, the market is suffering from a split personality, one of many signs that often accompany a major market top. But is the top now behind us? Ahh, there’s the rub. It may look like a top; it may even act like a top. But the reality is that no one on the face of this earth can possibly know whether or not it is the top.

Consequently, investing requires a continuous review of the facts so that one can be properly positioned. And it also requires an outlook about the market and its price trend in order to explain both what is happening – specifically, whether stock prices are rising or falling – and why. Given last week’s drubbing, it will be useful to re-examine the two possible outcomes that I have discussed often in recent years. For the sake of convenience, let’s call these two different outcomes the high road and the low road.

The low road outcome assumes that the stock market will eventually collapse. At some future time after this long bull market finally dies of exhaustion, stock prices will fall in a prolonged bear market, as they have done so many times before. The decline will continue until the price of most stocks return to that end of the valuation spectrum that is the opposite from where valuations are now. Dividend yields will rise to above 6%, from 1.6% at present, and P/E ratios for the major market indices will fall back to single digits from the 20+ levels now prevailing. Perhaps even market caps will once again trade under book values.

The low road outcome has been seen many times before in the United States and elsewhere. A recent example is Japan. The Nikkei average has lost 60% of its value since peaking in 1990, and believe it or not, it looks like this average still has further to go on the downside. The US market took the low road from 1966 to 1974, when US stocks nose-dived by more than 42.0%. And I say “more than” for a very good reason.

As a result of inflation and a decline in its international exchange value compared to other currencies, a Dollar in February 1966 purchased much more than a Dollar purchased in December 1974. How much more is an argument that could be debated by economists and statisticians for months, and the precise amount of purchasing power that was lost is not important to the point at hand. What is important is understanding a basic concept about stocks.

In this regard, stocks are inherently different from bonds. When a bond matures, the bondholder receives a precise number of Dollars, regardless what a Dollar may be worth. In contrast, stocks don’t have a ‘maturity date’ like bonds, and the enterprise value of a stock does not depend upon any currency. This point can be made clear by an example.

In the great hyperinflation in Weimar Germany after the First World War, German stocks soared. If a German investor had purchased stocks in 1920, he would have emerged from the hyperinflation with most of his wealth intact. Being invested in stocks, he would not have done as well as if he were holding Gold or foreign currencies, all of which were linked to Gold back then (this assumes he did not hold his currency in a bank that failed). But clearly, this investor emerged relatively unscathed compared to the German investor who owned bonds denominated in Reichs mark, the value of which became worthless because the Reichs mark became worthless. This result was also seen many times during the recurring Latin American currency collapses of the 1980’s, and it clearly explains the basic rationale underlying the thought process that gives rise to the other stock market alternative, which I have dubbed the high road.

These are the two alternative outcomes. But which one will finally prevail? Well, we don’t really know – yet. However, I continue to lean toward one alternative – the high road. I favor this alternative because I truly expect the Dollar over time to fare no better than any other fiat currency. It will be destroyed.

That can’t happen here in the United States, you say? Why not? It’s already happened once before, with the collapse of the Continental Dollar after the formation of this nation. Moreover, it’s happening every day now a little bit at a time as the purchasing power of the Federal Reserve Dollar continuously erodes away.

Even more importantly, the stock market itself is telling us that the high road is the most likely alternative. There are a few important clues suggesting this alternative, not the least of which is the stock market’s continuous rise to levels most people never dreamed possible. But as important as the action of the stock market may be, perhaps the message of the bond market is even more glaring. 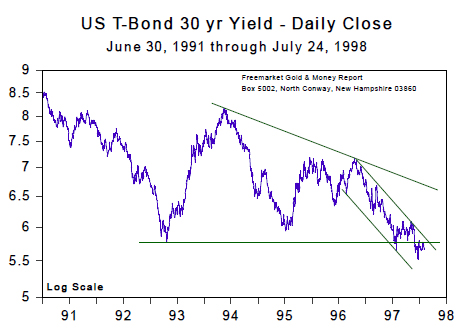 The reality is that bond prices are little changed from where they were five years ago, as is apparent from the above chart. Even though bond yields have recently broken below the October 1993 low, this decline appears to have been stopped. Bond yields are beginning to inch their way back up.

The bond market is telling us that currency risk remains considerable, that the Dollar will continue to lose purchasing power. For that reason, newly created money has been flowing into stocks, not bonds. Remember, M3 has been growing since the end of 1992, and that rate of growth has recently been surging. M3 is now growing by more than 10% per annum. As a consequence, the stock market has soared, and over the past five years stocks have outperformed bonds by a long shot, a result not unlike what happened at the beginning of the Weimar Germany hyperinflation.

The high roadalternative is happening before our eyes, but will it continue to unfold?Well, here’s where it gets tricky, namely, trying to figure out the future. But there is a relatively easy approach to this task, and it is one that does not require wasting a lot of brain power trying to calculate possible outcomes, nor will it cause you to loose a lot of sleep. Follow the stock market’s trend.

Right now the trend is still pointing up, notwithstanding the drubbing given to stocks last week. This conclusion is obvious from the accompanying chart, which has been presented in these letters many times before. 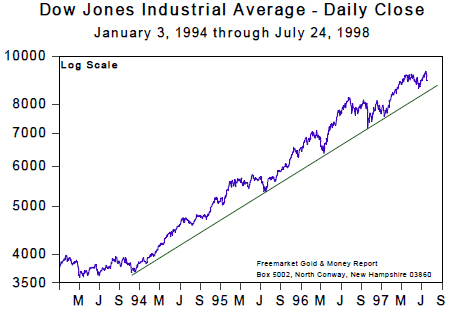 Until (and if) the uptrend line of the Dow Jones Industrials Average is finally broken, assume that the high road is still the most likely alternative. Namely, stock prices will rise because debasement/erosion of the Dollar’s purchasing power will continue.

However, once that uptrend line is broken, then the likely outcome changes to the low road. In this alternative scenario, the Dollar may not be spared from the ongoing loss of purchasing power, but the rate of debasement will slow. In that case, this one important factor that has been propelling the stock market upward will no longer work its ‘magic’ on stock prices, and the bear market will then begin.