October 25, 2009 – Gold’s ongoing consolidation in the $1045-to-$1060 area is very constructive to its ongoing bull market.  However, end of months are always very tricky because of option expiry.  The gold cartel writes a lot of calls in their market interventions aimed at capping the gold price.  As a consequence, they often bomb gold at month-end so that as many of their calls as possible expire out of the money, thereby enabling the gold cartel to earn the entire premium.

Even though October expiry is not a big month (compared to November expiry, for example), it is normal to expect some selling pressure this coming week.  In fact, the selling pressure to drop the gold price before option expiry has already started.  Please take a close look at the following intraday chart from Kitco. 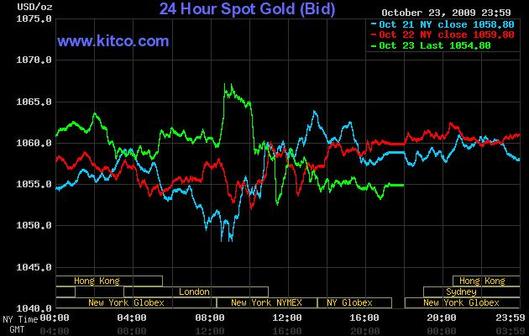 Note the sharp drop in gold on Friday (the green line) after 10.00am New York time, which corresponds to the completion of the London afternoon fix just after 3.00pm London time.  This drop was vintage gold cartel action to paint the tape.  They do this by hitting the paper market after the physical market in London is all but closed for the week and when trading in New York is thin just before the weekend.  But in contrast to month-ends in past years when there would be essentially a straight line drop, someone came in and bought the dip at $1050.

In other words, gold is a much different market over $1000 because of all the new players being attracted to gold.  As an example, Comex open interest has surged from earlier this year.  We can therefore conclude that the gold cartel has its work cut out if it aims to drive gold lower this month-end.  In other words, there is a lot of money on the sidelines waiting to buy dips that could derail the gold cartel’s plans.

The gold cartel’s objective will be to drop gold this coming week to the $1030s to trigger all of the sell-stops around that area, which the gold cartel will then use to cover its shorts.  In the past, I would normally say they could do it, but because there are so many new players entering the market, I am less certain now that the gold cartel can actually drop gold to that level.

We will soon find out if these new players are ‘weak hands’ and get shaken out of their trading positions if the gold cartel is successful in driving gold lower into option expiration.  Conversely, it is also possible that these new players are ‘strong hands’ and buy any dip, which is what happened on Friday.  If that happens again, then I expect we head higher this week regardless whether or not it is a month-end.

The following chart remains very bullish.  Gold is breaking out from the huge base it has formed over the past two years.

If we see a drop into the $1030s (a 50% probability for this week), it will be an ideal opportunity for traders to add to their position.  For my specific trading recommendations, see Trading.