October 21, 2009 – Evidence continues to emerge that the US dollar is headed for hyperinflation.  For example, consider why US stock markets are rising.

The Dow Jones Industrials, S&P 500 and other indices are not rising because the economy has started growing.  That won’t happen until employment stops falling, and there are no signs that employment will turn around anytime soon.  Nor are the stock markets rising because the financial crisis of the past two years has ended.  Banks failures are happening almost weekly in the US, with nearly 100 failures so far this year.  A large Dutch bank collapsed last weekend, indicating that there are insolvent banks outside the US as well.

It is important to note that one of the early warning signs of hyperinflation is a rising stock market.  The stock market rises because too much money is being created.  That condition is now being repeated in the US, as explained by the following chart (I’m not sure who the source of this chart is, so I do not identify who to credit): 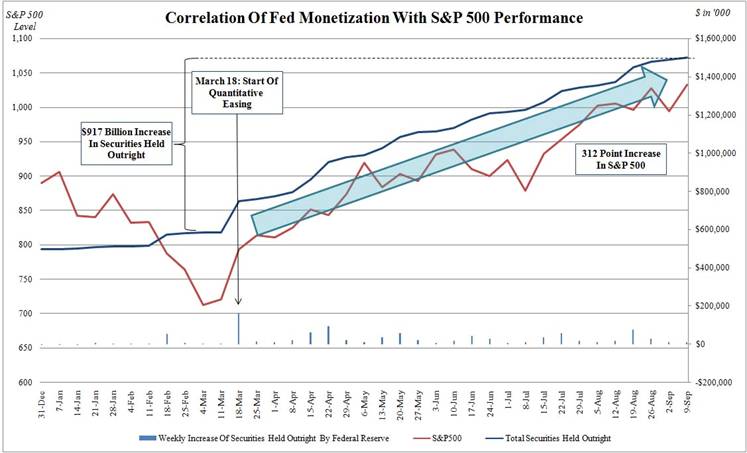 The above chart illustrates the close correlation between the price of the S&P 500 and the Federal Reserve’s program of “quantitative easing”, which is a euphemism for creating dollars out of thin air.  Note from the above chart how the stock market stopped falling in March almost to the exact day that quantitative easing began.  Then follow the rise in the S&P 500 along with the quantity of US government paper purchased by the Federal Reserve.

At its last meeting of the FOMC, the Federal Reserve indicated that its quantitative easing program would continue to March 31, 2010.  The substance would change slightly because after October 31 it will be buying agency paper rather than Treasuries.  But that change doesn’t matter.  The Fed is still creating money out of thin air, and it can be argued that this new program is even worse.  Because agencies are not direct obligations of the federal government, agencies by definition are of lesser quality than Treasuries.  So with this revised quantitative easing program, the Fed is also lowering the quality of the assets on its balance sheet.

Quantitative easing is a pernicious and harmful policy.  The US government and the Federal Reserve are pursuing policies that are sending the US dollar in the wrong direction.  The US dollar remains on the road to the fiat currency graveyard.