January 6, 1997 – An old Chinese proverb says that wisdom begins by calling things by their right name. It is possible to create a corollary of this adage that applies to the stock market. Investment savvy begins by accurately measuring the relative value offered by any stock.

To explain this notion, assume that your portfolio (the size of which you normally measure in terms of US Dollars) increases one year by 15%, but that the Dollar declines that same year against the major world currencies by 15%. Even if you did not travel abroad nor purchased any imported goods or services (admittedly an unlikely event in today’s global economy), it seems obvious that your wealth did not increase by 15%. The reason of course is that the Dollar is not a stable nor accurate measure of purchasing power, and it is purchasing power – the financial capacity to acquire goods and services – that truly measures one’s wealth.

The Dollar has lost anywhere from 70% to 90% of its purchasing power over the last thirty years because of inflation and its debasement compared to the other major world currencies. In the early 1970’s, it took ¥356 or SFr 4.03 to purchase US$1, rates far different from today. Consequently, does 6,500 on the Dow Industrials today really mean that the value of a portfolio of Dow stocks has increased eight times from the 800 level at which the Dow traded back then? Clearly, there are limitations to using the Dollar to evaluate stock prices.

These limitations of the Dollar are well recognized, and Gold is often used in an attempt to overcome some of the problems of measuring value in the stock market. For example, the following chart shows the number of ounces needed to purchase the Dow. 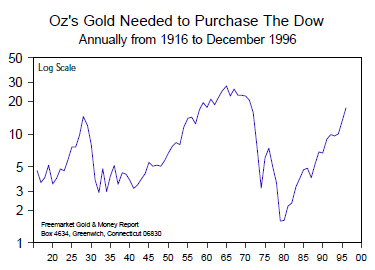 While the calculations presented in the above chart are a step in the right direction to measure the true value of stocks, another adjustment needs to be made.

The relative over-valuation or under-valuation of Gold and the Dollar in relation to one another needs to be corrected. This task can be achieved with the Fear Index. I have made these calculations, and they are presented in the above chart, which shows the relative value of the Dollar in terms of Gold. 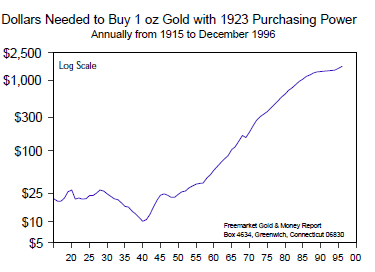 I purposefully chose 1923 to be the base year. The World War I inflation had ended, and the 1920’s boom had only begun. So 1923 is an ideal year to use as a base in order to make this comparison of the relative purchasing power of Dollars and Gold. This comparison enables one to talk about prices and values in a way that transcends time.

We can also use this methodology to make a comparison of stock prices. The following chart (on page 2) shows the number of ounces of Gold needed to buy the Dow Industrials, after adjusting the purchasing power of Gold and the Dollar with the Fear Index.

Note that it took over ten adjusted ounces to purchase the Dow in 1929 and 1959. The 1967 peak in the Dow was only achieved in nominal terms. Because the Dollar was already being debased by inflation, in real terms the Dow peak was reached in 1959. 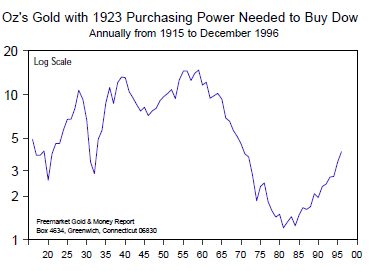 Thus, when considering valuations and speculative mania in the stock market, 1996 was not 1929 in two important ways. First, and most obvious, there was no crash. But secondly, stocks have not yet reached the high levels of overvaluation seen in 1929.

Experience and history tell us that when stock prices move above fair valuation, they will correct. However, there is no assurance that the correction – or even a bear market – will come swiftly. Levels of over-valuation can persist for some time. And interestingly, the speculative mania we are now witnessing is still mild compared to 1929 and 1959 valuations.