January 27, 1997 – It has become a tradition of mine at this time of the year to share some of my thoughts about the various markets, and to make some forecasts for the year ahead. I also use this occasion to look back at the year just passed, and for the first time in the ten years that I have been writing this letter, looking back requires a lot of effort. The reason of course is that 1996 was a very difficult year to make money – unless you were fully invested in large cap, blue chip stocks. But in order to sleep well at night following that investment policy, it required that you were also blindly and blissfully oblivious to the outrageous valuations that prevailed. For me, being out of the market was the least stressful alternative, so I am not too concerned that I missed last year’s opportunity to be loaded up with stocks.

To start out with the good news, I recommended buying the Midas Fund (to which I act as advisor), and it was up 21.2% in 1996 – not bad. Also, the other good news is that there were no disasters in my recommendations. Even though my propensity was (and remains) to short the Dollar, the T-Bond and the stock market, we spent most of the year on the sidelines while the major trends in these three markets worked their way in the opposite direction to what I had been expecting. Therefore, we did a lot of watching and waiting on the sidelines, rather than trying to go against prevailing trends. But that’s about all I can say for the good calls last year.

On the other side of the coin, Gold and Silver fell flat after a promising first quarter. Soybeans and grains moved higher, but fell short of my price target – so we didn’t make a lot of money in beans. I thought the British Pound and Canadian Dollar would be weak, but they weren’t.

So that’s about it for last year, and rather than wringing my hands any further, let’s turn to the year ahead. And relying upon the adage that a picture is worth a thousand words, I would like to focus on the year ahead by using several charts. Each conveys a powerful message about what to expect, and in my view, for the foreseeable future everything depends upon the course taken by the T-Bond. 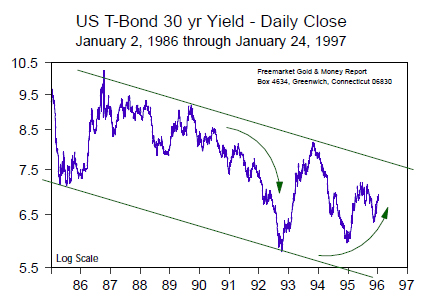 The above chart is at best neutral, and it is very easy to put a bearish interpretation on it. T-Bond yields reached their low point in October 1993. Ever since they have been working their way generally higher, and I think that a bottom in yields has been put into place.

I have not reached this bearish conclusion about T-Bonds just from the chart pattern. There are also good fundamental reasons to expect T-Bond yields will rise.

These include: (1) inflation is not dead (more on this below); (2) the federal government continues to borrow money recklessly and the spend it like drunken sailors; and (3) overseas central banks have gobbled up $206 billion of federal debt during the past two years (their investments rose from $411 billion to $617 billion), and much of this buying power was spent on long-term paper. Where would T-Bond yields now be if these central banks (mainly Japan) had not been buying these huge amounts of the federal government’s debts and thereby artificially keeping yields from their natural level? Who else had the financial resources to come aid and abet the debt addicted federal government? In my view, no one.

Importantly, there are indications that this purchasing of federal debt by central banks has stopped (see Randall Forsyth’s article in today’s Barron’s). Therefore, it will be necessary this year to raise interest rates to flog the federal government’s debts (which will probably grow during the year by some $340 billion). Higher interest rates may lure some buyers, but it will also wreak havoc on the owners of the T-Bonds already outstanding by lowering the price of that paper. That reality in turn has negative implications for the Dollar, whose bear market rally is now ending. 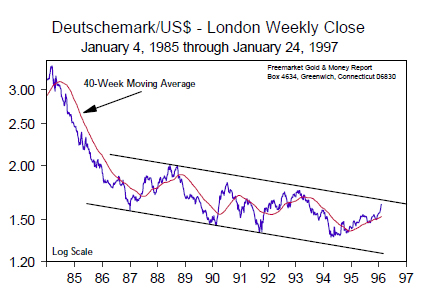 It is clear from the above chart of the Deutschemark that the Dollar is on a downhill path, and has been for some time (since the 1960’s actually). The parallel lines mark a distinct 10-year downtrend in the Dollar, but note what has happened over the past two years. The Dollar has been rising in a bear market rally, but that rally is nearly over. The bad news is surfacing.

You will recall my fundamental axiom about presidential elections – the good news comes out before the election; the bad news surfaces after the votes have been counted. Clinton’s back in, so now the bad news begins. And the worst of the news is the likely surge in inflation in the weeks and months ahead. To briefly explain my thoughts on inflation, I would like to share with you a letter that I sent last week to the Editor of Barron’s. I wrote this letter in response to an article that appeared in last week’s paper.

Gene Epstein suggests (“Why Inflation Has One Foot in the Grave”, January 20th) that “In today’s economy, it’s price rises that cause an increase in the supply of money, not the other way around.” That’s like sayingwet streets cause rain.

Inflation always has been and always will be a monetary phenomenon. In short, inflation is a process which debases the purchasing power of money, and like all economic goods, money depends upon supply and demand. Create too many Dollars (i.e., more than the market demands), and in time rising prices will be the result – not the other way around.

In continuation of a well established multi-year trend, the latest report for weekly M3 shows a 7.4% per annum jump, the highest rate of growth since 1987. It is therefore no surprise that this pernicious monetary growth is already having some effect. The CPI – which has been trending higher for some time – is now at the highest level in nearly four years!

Inflation – while still low compared to the late 1970’s and early 1980’s – is far from dead. With M3 growth rates at multi-year highs and at levels well above reported PPI and CPI, there is plenty of inflation in the pipeline.

While on this subject of inflation, I would like to offer the following chart as evidence that commodity prices are not dead. The CRB Index remains in a well established uptrend, though clearly, it took a breather after peaking in early 1996 (along with the precious metals). 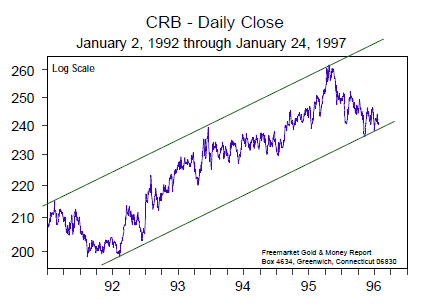 There has been an interesting development in the commodity markets. There was considerable rotation between the various sectors in 1996.

Metals were strong at the beginning of 1996; then grains jumped up as the metals (including copper) fell back; and then in the last half of the year the energy sector rose as grains dropped. Therefore, year-on-year the CRB is essentially unchanged.

However, it is worth noting that the Goldman Sachs Commodity Index (which is heavily weighted with energy prices) rose last year by 31%. Inflation is not dead, which is also the conclusion of the following Gold chart. 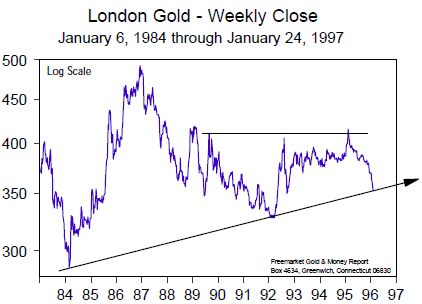 Gold has been boring, but say what you will, Gold nevertheless remains in an uptrend from its February 1985 low. During this period, Gold has risen about 1.9% per annum. Not spectacular by any means, but not too far below the rate of Dollar inflation over this time frame. And I expect Gold to once again begin moving higher.

Given the fact that Gold is at major support and very oversold, a move back toward $400 (and perhaps over that critical level) can be expected from here. Gold prices will move higher from here as the bad news about higher inflation, higher interest rates, and a weak Dollar takes center stage.

In short, I expect 1997 to be the mirror image of 1996. This past year started with rising precious metal prices and exceptional concern about inflation and the T-Bond. However, the Federal Reserve – with the help of some overseas central banks – managed to calm the markets in an election year. As a result, T-Bonds and the Dollar rallied. Gold fell with volatilities in the Gold market reaching record lows.

This year Gold has started flat on its back, with the Dollar and T-Bond at or near multi-year highs. Look for the T-Bond and Dollar to swoon, while Gold climbs higher.

In summary, last year Gold started strong and ended lousy. This year Gold is starting lousy, but I expect Gold to end strong. I think we Gold bulls will be rewarded this year.