What Is Gold’s Future?

February 10, 1997 – The past few weeks have been rough ones for Gold. Can we expect more of the same, or is the bloodletting nearing an end?

No one knows the answer, nor is it useful to try guessing what lies in the future. But it will be helpful to understand what is happening to Gold by focusing upon the one issue of critical importance to it. Specifically, by looking at the factors that determine how Gold is used, we can make some judgements about Gold’s price over the long-term.

Gold has several applications, and some of these are well recognized. Broadly speaking, Gold is used in industry, dentistry, and jewelry. Not well recognized or understood today is the monetary role still filled by Gold.

Though Gold has compiled an important historical record as money, which results from its many unique and timeless attributes, its monetary role today is somewhat muddled. Many believe that Gold has been demonetized. Nevertheless, Gold still is a monetary asset.

I am calling Gold a monetary asset purposefully because it no longer circulates as currency. However, it is still money. That’s why central banks still own 33,850 tonnes of it. That’s why people everywhere hoard it, even if they can no longer spend it as currency. In fact, I believe that a monetary role is essential to Gold’s future.

If the purchasing power of Gold is to be maximized, Gold’s usefulness must first be maximized. To do this, the monetary role of Gold must not only be sustained, but it must even be enhanced. This conclusion results from my analysis of the aboveground Gold stock.

It must first be recognized that Gold is the only commodity – indeed the only good and service – that is produced for accumulation. Everything else is produced for consumption, so supply and demand analyses of Gold that look only at annual production are seriously flawed. The reason of course is that the any portion of the existing aboveground stock of Gold is perfectly substitutable for new production. In fact, some of the existing aboveground stock is regularly recycled (salvaged from industrial uses, for example) and periodically dishoarded.

The aboveground Gold stock presently totals about 107,717 tonnes. Of this amount, some 76,776 tonnes (or 71% of the total aboveground stock) are held for monetary purposes. This weight of Gold held for monetary purposes dwarfs the weight of Gold held for fashion jewelry as well as any demand arising from all of its various applications in industry and dentistry (these non-monetary uses together account for only 29% of the aboveground Gold stock).

These totals of Gold’s different uses make it clear that the bulk of the aboveground Gold stock is held because Gold is money. Therefore, the demand for Gold for use as money is of critical importance to determine Gold’s overall usefulness, and therefore its value. The higher this monetary demand, then the greater will be Gold’s rate of exchange for national currencies (what we call the price of Gold). Therefore, the destiny of this weight of monetary Gold – particularly the Gold remaining in central bank coffers – is of central importance to Gold’s price in the future.

It will be useful to further distinguish between the types of Gold’s different monetary demands. The following chart presents the distribution of this Gold by its monetary use within two broad categories – monetary Gold held by governments (33,850 tonnes) and monetary Gold held by the private sector (42,926 tonnes).

Note that Asians and Middle Easterners tend to buy high-karat jewelry for the same reasons Westerners buy coins and bars – for monetary purposes. This monetary jewelry is presented in the following chart, and is very different from fashion jewelry (which is 18-karat or less, and has a relatively high mark-up for its non-Gold content, i.e., its style). 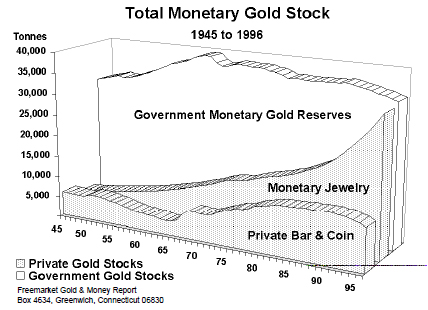 This breakdown of the monetary Gold stock in the above chart makes clear recent trends. We know that Asian and Middle Eastern hoarding has increased significantly, a phenomenon clearly evident in the chart by the rapid growth in monetary jewelry. However, despite this above-trend growth in demand in this one area, the Gold price has been stagnant. The reasons of course are: (1) the drop in Gold held as private bar/coin along with (2) the dishoarding from government stocks in the face of (3) increased annual Gold production in absolute terms (even though in percentage terms the aboveground Gold stock continues to grow about 1.75% per annum).

These trends are not reassuring. It is unlikely that stopping the ongoing dishoarding from government stocks and private bar/coin can be achieved in the near-term.

While the aboveground stock of national currency significantly dwarfs the aboveground stock of Gold (and therefore represents potential demand for Gold), the price of Gold is likely to remain subdued unless the monetary demand for Gold can be enhanced. Therefore, the price of Gold will remain under pressure until the monetary demand for Gold can be stimulated. Possible reasons would be, for example, a resurgence in inflation at a rate sufficiently high enough to scare consumers or perhaps an unforeseen monetary calamity (such as a banking collapse in Japan and/or crashing stock markets in the United States and Europe).

The Gold mining industry has its work cut out for it. To enhance the attractiveness of its most important product and to maximize the overall demand for Gold, it is clear that the mining industry must purposefully focus on increasing the monetary demand for Gold. This objective is easier said than done. But given Gold’s unique monetary attributes and its unparalleled history as money, it can be done.

Gold does have important advantages. For example, for the past fifty years the aboveground stock of Gold has grown at a fairly consistent rate around 1.75% per annum, a rate far less than the rate of growth of every national currency. For this reason, Gold tends to preserve purchasing power when viewed over long periods of time.

It is also worth noting that the aboveground Gold stock is being privatized, albeit slowly. At the end of World War II, central banks controlled 68% of the total aboveground Gold stock and 75% of the monetary stock of Gold. Those percentages have today dropped to 31% and 44% respectively, which shows that the private sector holds the upper hand. The private sector controls a much larger weight of Gold than the central banks, though the significance of this relative position is often lost in the all too often frenzied discussions about the hoard of Gold in central bank coffers.

It will be to the Gold mining industry’s benefit to increase the demand for Gold as money. Indeed, in an environment of dishoarding from government and private stocks, the mining industry’s profits and cash-flow in the near term will substantially depend upon it.