No Surprise in Gold’s Big Bounce

The nearly $30 surge in the gold price from Friday to yesterday’s close in New York should not surprise anyone familiar with the gold price suppression scheme documented so carefully and thoroughly by GATA.  For years the gold cartel has been manipulating the gold price to repeatedly feed upon those traders who are guided by black-box trend following models.

These so-called “trend followers” are now turning their position around from short to long.  The big price jump occurred because these traders more or less act en masse when the price breaks through the short-term moving averages, which also explains the price collapse last month when they sold gold en masse.

Unfortunately for these traders – and more to the point, their customers – they have been fleeced once again by the gold cartel.  They are covering at a loss the short positions they established as gold slid under $1100.

I have explained before how these trend followers are getting their pockets picked because “the gold cartel can force these traders to buy and sell at disadvantageous moments.”  This market manipulation has been happening for years.  Consequently, these traders are consequently losing tons of money.

Hopefully some day in the not too distant future, honesty and free-markets unfettered by government intervention that favors vested interests, and particularly the cartel of ‘too big to fail’ banks – of which the gold cartel is one small part – will again prevail.  Until then, we must deal with the reality that markets are rigged to favor these insiders.

So what can we do about it?  Most importantly, the answer does not come from government.  It is the problem, not the answer because it is has been taken over by special interests.  So forget about the CFTC and other government agencies.  The government and its agencies are today run for the benefit of the insiders – not for you and me.  The honest and well intentioned people in government trying to do the right thing are outnumbered and repeatedly outmaneuvered.

Consequently and somewhat ironically, the only remedy will come from the market, or in other words, from you, me and all the other market participants.  We hold the outcome in our hands because the market is always bigger than any government or even a cabal of governments acting in unison.

Here are three recommendations for action, and I am sure that the creative people reading this commentary can think of many more.

1) Remove your invested funds from commodity trading advisors and hedge funds that rely solely on black-box trend following models and inform others of your action and the reason you took these steps.  By doing so, the black-box models will eventually disappear as the money in them flees as a consequence of these withdrawals as well as of course poor performance because of the repeated trading losses they are taking.  Thus, as the black-box-only traders shrink and eventually disappear, you are depriving the gold cartel of an important feedbag.

2) Begin to think and trade like the gold cartel.  Eventually as more people follow the gold cartel’s pattern, fewer and fewer uninformed people will be available to take the losing side of the trade, which will break the gold cartel’s stranglehold.  While this may sound like an impossible task, it isn’t.  For example, I append hereto my recent comments explaining how the gold cartel manipulated the market during the February gold option expiry.  As I note in the links above, this pattern has been repeating like clockwork for years, which explains how I was able to predict what was coming.

3) Don’t buy paper-gold products.  Buy physical metal under a consistent dollar-cost averaging program.  This alternative is the best choice for everyone.  Leave trading the metals to speculators and professional advisors.  Don’t trade gold in any of its forms.  Instead buy it and save it.

For my specific trading recommendations for speculators and professional advisors, see Trading.

2) It looks like the upside break-out will happen this week.  My best guess is that each metal needs some more ‘backing & filling’ over the next two days to build a stronger base.  However, an upside break-out could come at any time.

3) Look to buy both gold and silver on strength, if we get it, thereby adding to existing trading positions.

4) This break-out would be the first indication that gold and silver are beginning the next leg up in their bull market.  The next step would be for the metals to probe over-head resistance at the recent high around $1218 for gold and $19.30 for silver.

Comments, 21 January 2010 (posted 09h00 CET):
1) The ‘backing & filling’ I expected is deeper than I had hoped.  I nevertheless planned for it by keeping relatively tight stop-out points.

2) Despite the apparent severity of yesterday’s decline, there was relatively little technical damage to gold and silver.  Even the short-term uptrends remain intact.

3) For now I am reluctant to recommend buying here.  We are seeing classic trading action by the gold cartel as they run the stops and try to turn the black-box trend followers from long to short.

Comments, 22 January 2010 (posted 09h35 CET):
1) The gold cartel has been successful in running the stops, which is one of the possible outcomes suggested in my commentary yesterday morning.

3) The gold cartel operates principally in the derivative ‘paper’ market for gold (i.e., forwards, futures, and options).  Physical metal is used by them only sparingly because it is limited in supply.  There is no limit to how much paper it can sell, so the gold cartel is most active after the physical metal closes for the day.  Typically, little physical metal is traded after the London PM fix.  The following Kitco chart shows unmistakable gold cartel action.  Note the steep decline the last two days after 10h00 New York time (15h00 London time), which coincides with the conclusion of the London PM fix. 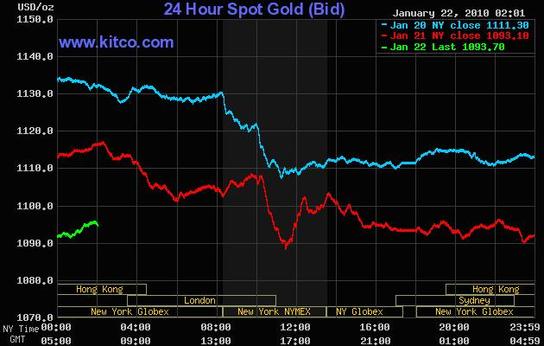 4) The selling pressure by the gold cartel through various gold derivatives ‘painted the tape’.  But it also served another purpose.  Much commodity trading is guided by computer algorithms aimed to identify the price trend.  One does not need to be a rocket scientist to reverse-engineer these so-called “black-box” traders.  Typically when the short-term moving averages are broken, these traders reverse their position.  So yesterday a lot of them switched their gold position from long to short, which was the gold cartel’s objective.  It gave the gold cartel the opportunity to cover the short selling they did around $1140 earlier in the week.  The situation is described perfectly by John Brimelow:

“The two decisive elements in Thursdays trading…were the revelation that Wednesday’s down $27.40 day only saw open interest down 1,160 lots (3.6 tonnes) and the timing of the heavy selling which drove gold down $16 in less than an hour after the $1,108.25 PM fix, and which also sliced $9.30 of gold in the very thin period between the floor close and 4PM.  The open interest news strongly suggests that some serious short selling was around on Wednesday, while the timing of the selling on Thursday makes this a virtual certainty. No proceeds-maximizing seller would press the market at those times.”

The gold cartel is not a “proceeds-maximizing seller”.  It is a price capper.

5) Friday afternoons are notorious for gold cartel actions.  After London closes, when US traders begin focusing on the weekend and when the day-traders and scalpers start heading for the beach during the summer and the ski-slopes during the winter, liquidity is very thin.  That circumstance creates a unique opportunity for the gold cartel to take some ham-fisted steps with its arsenal of derivatives to ‘paint the tape’.  Consequently, I would not be surprised to see more downside probing in late New York trading today.

7) Being a trend-follower, I am reluctant to recommend traders buy here, particularly with option expiry in a few days.  I would like to see some base-building first.  But it is clear that gold remains good value.  As a consequence, long-term accumulators of physical metal should use this opportunity to buy gold at this relatively good price.

8) In my forecast for the gold price in 2010, I said: “In fact, it is likely that a floor has been put under the market around $1050, the price at which India made its recent gold purchase from the IMF, though I don’t expect gold to fall below $1080.  Like 2009, the low point for gold will probably occur early in this year’s first quarter.”  We are at that low point.  We will see in the next day or two whether gold will drop to my forecast low of $1080.

9) What’s true for gold is basically also true for silver.  The option expiry for silver this month is not large.  But when gold swoons, so does silver but typically with much more volatility and greater swings.  Therefore, silver probably has further to fall, and $17 is a reasonable target.

10) I was clearly wrong about the upside break-out happening this week.  The gold cartel bought more time with its price capping antics.  But the gold cartel has not changed the long-term trend toward a higher gold price.  Once option expiry is behind us, we can start focusing once again on the resumption of the short-term uptrend, which will inevitably lead to the next upside break-out.

2) Selling pressure may continue for one more day so that the shorts have a low gold and silver price for marking-to-market their positions, making their month-end balance sheets look better.  But the worst for gold and silver I believe is now behind us.

3) The ‘black-box’ trend followers have switched from long to short, and the gold cartel used that opportunity to cover below $1100 their shorts established above $1120, enabling the gold cartel to earn a huge profit.  As evidence, note the decline in open interest over the past few days as the short-term moving averages were broken.

4) It is difficult to recommend buying here.  All of my experience has taught me not to trade against the short-term trend as determined by the short-term moving averages, all of which are pointing lower.  However, this difficulty I am having is exactly the thinking on which the gold cartel feeds.  But we need to put aside emotion and use logic.  Therefore I recommend traders today start establishing new long positions.

5) Long-term accumulators of physical metal should ignore the short-term trends and the fluctuations in price.  Continue to accumulate physical metal through an ongoing metal accumulation program.

Comments, 30 January 2010 (posted 18h30 CET):
1) Comex Open Interest continues to fall, which indicates that the gold cartel ‘raid’ is ending.  The shorts they established around $1140 – which capped gold at that price – have now been covered.

2) I continue to believe that the low is now behind us.  However, watch the stop-out points carefully.

3) If the market starts moving higher from here, as I expect, plan to buy on this strength to build a trading position.  See the new positions and my recommendations.

Comments, 4 February 2010 (posted 23h00 CET):
The massive selling today in gold and silver felt like a selling climax.  If there is no immediate downside follow through, a sharp upward reversal is likely.

Comments, 8 February 2010 (posted 15h30 CET):
The bounce late Friday, which has held so far, is further evidence that last week’s smash in the precious metals was a selling climax.  There may be more probing to test the lows, which could create an opportunity to bottom-pick over the next day or two.  For now, stand aside (except for the ratio trade I recommend), but be ready to buy on strength.