Some Common Sense Observations About Gold

November 25, 1996 – Nobody these days has anything good to say about Gold. In keeping with prevailing sentiment, I won’t say anything good about it either. However, I will make some basic observations about Gold, and hopefully these obiter dicta will provide enough common sense to enable one to make an informed judgement about Gold’s prospects.

1) “Fear of rush from gold grips market” blared the headline of a recent Financial Times. Commenting on a report prepared by one Swiss bank’s so-called “director of political research” (I wonder what this Swiss bank’s bullion and monetary experts had to say about the report) the article speculated that in preparation for monetary union, European central banks “will be tempted to sell gold to meet their Emu objectives.” Even before reading the report (I have now digested all 3¼ thinly reasoned pages of it), I surmised that it was written by a 20-something ‘hot-shot rocket scientist’. I was right. This is not to disparage rocket science, but given this “kid’s” limited real world experience and apparently shallow understanding of Gold, I question his cognitive process, and suggest that his inferences not be taken too seriously.

At its most basic level, Gold is power. That’s what money is all about. If you’ve got the Gold, you’ve got the power, a basic conclusion which causes central banks to carry on their intense love/hate relationship with Gold. They hate Gold’s genuine and unfailing truthfulness, laying bare as it always does the ongoing debasement of central bank managed currencies. However, they love Gold’s role as the ultimate monetary and power asset, and most central banks part with it only grudgingly. Therefore, watch what central banks do, not what they say.

The savvy central banks understand that if they dishoard their Gold, they are disposing power and reducing their might. Therefore, Germany, France, England, and even the United States tightly hold on to their remaining Gold reserves. Even though they can be very vocal about Gold and often disparage its characteristics and prospects, these countries only dishoard Gold when absolutely forced to do so (for example, the US dishoarded some Gold in the 1970’s to try influencing the runaway Gold market back then). These power oriented countries instead get the less knowledgeable central banks (Canada, Belgium, and most Third World countries) to unwittingly dishoard their Gold, and then pretend that Gold doesn’t matter. If Gold truly didn’t matter, no central bank would today own Gold. They would have dishoarded their last ounce decades ago.

2) The latest saga about European central bank dishoarding is a report that proposes amending the Swiss Constitution to abolish the Swiss National Bank’s requirement that it hold enough Gold to cover at least 40% of the Swiss Franc notes (i.e., its cash currency) in circulation. Any change in their constitution needs to be submitted to the Swiss people for their approval in a referendum. Given the importance of the banking sector to that country, and the Swiss reputation for financial and monetary prudence, any change in the monetary provisions is very unlikely. As a friend put it, saying that the Swiss National Bank is going to dishoard some of its Gold is like saying that McDonald’s isgoingoutof the hamburger business. In other words, it just won’t happen.

The Swiss do have a problem in managing their currency. They barely have enough Gold to meet the growing demand for Swiss Franc notes. Therefore, should the Swiss change their Constitution? Or should the Swiss National Bank buy Gold in the open market, thereby increasing its hoard by a sufficient weight in order to meet the country’s growing demand for notes while still enabling it to comply with its long-standing Constitutional requirement for issuing cash currency? To me it seems option number two is the logical alternative. That this option is not even mentioned as a possibility attests to both the extremely negative sentiment about Gold at the moment (“sell it before it goes to zero”) and the very narrow and misguided focus by which monetary policy is being viewed around the world (“central banks no longer need Gold”).

At times like these, we are well advised to remember J.P. Morgan’s dictum: “Gold is money, and nothing else.” What was true in 1913 is no less true today, though no banker today is as forthcoming nor as clear about Gold’s essential nature.

4) Ponder a moment the unbelievable feat accomplished by the Gold market over the past few years. In addition to all the central bank dishoarding, the Gold market has also fully absorbed anywhere from 2 to 3 years of future production (i.e., by the process of ‘forward selling’, mining companies have sold today 2 to 3 years worth of Gold they expect/plan/hope to produce in the future). Moreover, the Gold market has at the same time absorbed what has now become a record short position (i.e., speculators, traders and others with a negative view on Gold presently have the largest commitment ever to deliver Gold which they don’t own and don’t have in their possession). The remarkable point is that the Gold market accomplished this feat with very little change in price (Gold is trading only 2% or so below its average price for the last three years).

5) There are many similarities today with the 1930’s. Namely, there exists today, as there existed back then, far more liabilities to pay/deliver Gold than there is Gold available for delivery at current price. The result of this imbalance in the 1930’s was defaults on a massive scale (because currency and Gold were directly linked, all loans throughout the general economy were also directly linked to Gold – when you owed Dollars, you in effect owed Gold). Today the imbalance is not as widespread because the direct Dollar/Gold link does not exist. Nevertheless, today’s imbalance is potentially no less profound to the banking system, even though it may be more limited in scope (fewer banks today have Gold liabilities, but for those that do, their liabilities in the aggregate are massive).

6) The central banks are operating in the Gold market in silence. Shouldn’t their operations be transparent so that central banks are accountable to ‘the people’ of the nation who they supposedly serve? Well, the truth is that they don’t serve you and me, and it is an outrage. The comments of Tom Drake in the August 1st issue of his Gold Fax Bulletin (fax #505-989-3351) in this regard are particularly revealing and poignant.

“Each time the short sellers [of Gold], the mines, the trans-national banks hopped on the free ride presented to them by the central banks: indeed they were invited in and asked to do it. This is how market manipulation works in our modern era of central bankers. The insiders are tipped off and often financed by the central bankers, and the butlers and servants in Wall Street do their dirty work for them, getting wealthier in the process. The lid is kept on [the Gold price], and the financial chaos and debt circus are kept going for another day, another year. If you are not a goldbug you may ask: “And what is wrong with all of this? Isn’t it the function of a central government to establish a policy and defend it with the power of the State?” But isn’t the crux of these questions: to what extent may the power and natural rights of the individual – as defined and won by the revolutions from 1688 to 1789 and beyond – be manipulated and thwarted by the policy of the State? Is suppression of market “opinion” – its price and direction – which is, after all, synthesized from the freely made decisions of a multitude of individuals, any more justifiable than suppression of free speech, free association? Is the manipulation by financial insiders at the invitation of the central banks and central governments any more justifiable than that by a hereditary aristocracy or priesthood? I think not.”

The central banks have it backward. They appear intent on managing Gold. They should instead be managing their national currencies.

7) The recent drop in the Rand has caused an increasing number of South African mines to sell forward to take advantage of the rising local currency price of Gold. The recent rise in the Aussie Dollar has caused an increasing number of Australian mines to sell forward before the price of Gold falls any further in terms of their local currency. If these incongruent observations seem nonsensical, it’s because they are. If a rising currency and a falling currency both attract increased forward selling of Gold, something has to be wrong with the perception of the Gold market by these companies. This conclusion is reinforced by the near panic selling at which the companies have sold their Gold forward. It seems likely that market sentiment has reached an extreme. Neither the South Africans nor the Australians – and many North American mining companies as well – believe that they can maximize their future profit by selling Gold when its produced in the future, and therefore choose to sell it now instead.

8) Chart patterns can be a very useful tool. The reason is that patterns often repeat, and they do so for good reasons. Chart patterns reflect investor sentiment, which itself swings from ebullient bullishness to extreme pessimism. This observation is true no matter whether one is talking about stocks, currencies or commodities. Therefore, the proper interpretation of chart patterns provides a window on possible outcomes. The accompanying Gold chart demonstrates this point. Note that I have drawn two nearly identical chart patterns which outline prices at present and also the end of 1992 to early 1993. This comparison is important. Think back to early 1993, and the state of the Gold market back then. 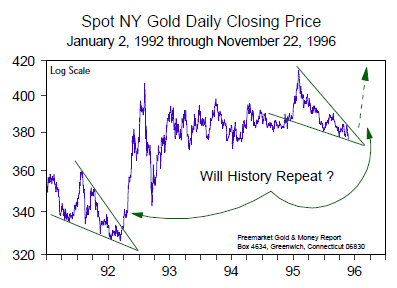 Remember how pervasive the bearishness was at the time. Is the level of bearishness any different today? No, it’s not, and this high degree of bearishness has arisen in the same way it did in back in 1992-93. The price of Gold has just kept eroding after each rally, and every reversal in price has dragged investor sentiment down along with it.

The important point of this analysis is to put today’s Gold price into its proper perspective. There are so many similarities between the Gold market in early 1993 and today that they cannot be ignored. This observation is not to be taken to mean that a 1993-size rally in the Gold price is a sure thing – after all, no one can predict the future and nothing in life is certain.

However, if you are a betting person, the odds suggest that a bottom in the Gold price is finally at hand. More importantly, if you are a value oriented investor, time will likely prove that anyone accumulating Gold (and Silver too for that matter) at today’s prices will have made a sound decision.