November 4, 1996 – In the last letter I noted the possibility of “one last upward spike in T-Bond prices to provide the markets with one last piece of good news before the presidential election.” We are getting that spike in prices now.

I happened to be watching CNBC this past Friday morning after the unemployment report was released. They interviewed a couple of traders from the T-Bond pit at the Chicago Board of Trade, and their mood was ebullient. One trader could hardly hold back his giddiness, things were going so swimmingly. His ear-to-ear smile was as good a sign as any that the pre-election ‘pump priming’ and ‘fine tuning’ by the Federal Reserve has reached its final stage.

I have been making one important point in recent letters, and it bears repeating again. The good news comes before the election; the bad news comes after. Therefore, it is probably safe to assume that this latest upward spike in T-Bond prices is one of the last pieces of good news about the economy and interest rates for some time to come. After election day on November 5th, reality begins. What is that reality?

The federal government continues to spend money far beyond its means. The never-ending deficits of the federal government are creating a mountain of debt, which has to be serviced with the timely payment of a fair rate of interest. This debt is denominated in units of account called US Dollars, and the value of these Dollar units of account are now determined by politicians and their hand-maidens at the central bank, not by an immutable and unalterable neutral standard of value like Gold. 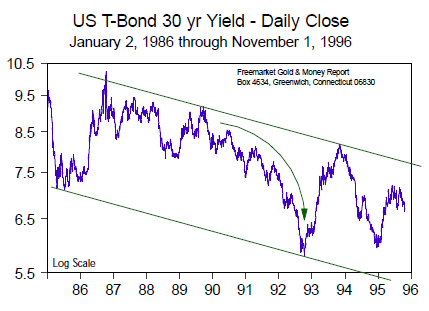 Another interesting observation can be made from this chart. Note the curved arrow marking the slide in yields from 1990 to the October 1993 low. This pattern has the appearance of climactic action, and the mood of the market at the time confirmed that a major turn was occurring. Remember how Mr. Clinton was quick to take credit for this slide in T-Bond rates even though he had only been in office for several months? Remember how the federal government in 1993 began reducing the average maturity of its debt obligations in order to take advantage of lower cost short-term debt, in the expectation that interest rates were going to fall forever?

I believe October 1993 marks an important low that is unlikely to be broken. The reason of course is that the Dollar is continually being debased by inflation and spendthrift policies in Washington. In that kind of environment T-Bonds yields have to move higher to provide investors with a yield adequate to compensate for the real risk that the currency (those Dollar units of account) will lose purchasing power from debasement.

One other meaningful observation can be made from this chart. Note how T-Bond yields fell throughout 1995. This decline in yields was the result of artificial and unsustainable actions. Specifically, foreign central banks (mainly Japan and other Asian central banks that have been accumulating Dollars from huge trade imbalances with the US) have been purchasing federal government debt instruments as if it were a feeding frenzy.

In December 1994, foreign central banks owned $411 billion of federal government debt instruments. They increased this amount by a 22% rate of growth in 1995, to $501 billion. So far in 1996, central banks have added another $95 billion to $596 billion, a 23% per annum rate of growth. It is interesting to note that during this same period, ownership of federal debt instruments by Americans dropped by $100 billion, so that overseas investors now own 30% of the federal government’s debt, a record high.

The effect of this massive and rapid acquisition of debt has been two-fold. First, the Dollar has remained relatively strong against the major foreign currencies. Rather than selling the Dollars being accumulated in their trade surpluses, central banks are instead holding the Dollars and investing them in federal government debt.

Second, Dollar interest rates have been distorted by this massive accumulation of debt. How high would interest rates now be if the federal government were fobbing off its debt only on the American public? But there is more to this debt story. With the ownership of some $40 billion of debt, the federal government’s fourth largest creditor country is the Netherlands Antilles. The Netherlands Antilles? How can that be?

The Netherlands Antilles is a very small Caribbean island, but it is very big tax haven, known to be a preferred venue by hedge funds. It is safe to assume that most of this debt is owned on margin (typical hedge fund operating procedure) to take advantage of what so far has been an attractive carry-trade.

The trade works like this. The hedge fund borrows Yen at the going interest rate (about 2½%) and then sells the Yen to buy Dollars, which are invested in federal government debt instruments earning 5% or more. It is a very profitable strategy as long as the margin is not eliminated if Dollar interest rates fall and/or Yen rates rise, and as long as the Yen does not strengthen against the Dollar.

So far the Yen has been weak against the Dollar (thanks to Bank of Japan efforts to try reviving the Japanese economy by stimulating exports through a weak currency). And so far, the margin between US and Japanese interest rates has not been eroded. But for how much longer? Can we assume that this strategy will continue to work after Tuesday’s election?

I wouldn’t want to bet on that. While Dollar interest rates may for the time being remain above Yen rates, the Dollar/Yen exchange rate may reverse course in view of the massive trade surpluses once again being accumulated in Asia.

The good news about the economy is being reported in the front page of every newspaper, which is yesterday’s news. It is safe to assume that the post election environment will be very different from that experienced over the past year or two, and given the debt and spending problems of the federal government, it is not likely tobe a pleasant environment.