June 15, 1998 – Mr. Miller was ousted, and Paul Volcker was rushed in to pick up the pieces. But the change came too late. The damage had already been done. Inflation had begun to surge.

Not long after he was inaugurated as President, Jimmy Carter appointed William Miller as Chairman of the Federal Reserve. This appointment probably had more to do with politics than ability, as it seemed Mr. Miller would do whatever was needed to try pumping up the US economy. However, his efforts fell far short of that objective, and Mr. Miller’s short-lived tenure at the Fed came to an abrupt halt.

What was Mr. Miller’s error? Why did inflation surge? Inflation jumped in the late 1970’s for the same reason that always causes inflation to surge – the money supply was expanded too rapidly. That growth of money under Mr. Miller’s tenure can be seen on the accompanying chart. 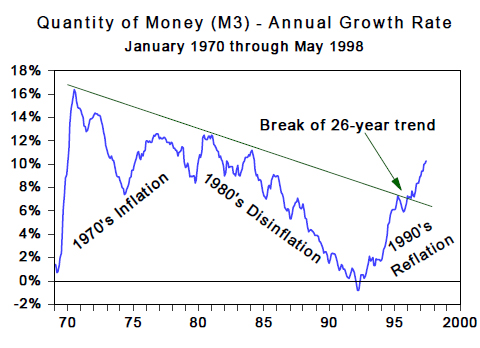 Relative to the surge in the early 1970’s, the late 1970’s money growth looks relatively mild. However, it was enough to send consumer prices up by annual double-digit rates. Mr. Miller had a theory about money that he put into practice. It was his belief that inflation would not rise if interest rates were held steady. So he kept interest rates on an even keel, choosing to ignore the inflationary pressures that were building from the rapid increase in the growth of money.

I am recounting Mr. Miller’s fate because the experience of the late 1970’s has some ominous parallels to today. While the current Federal Reserve Chairman undoubtedly stands head-and-shoulders above Mr. Miller in terms of ability, for some inexplicable reason Alan Greenspan appears to be putting Mr. Miller’s monetary theory to a test – keep interest rates unchanged and don’t worry about the growth in the quantity of money.

As the accompanying chart shows, the Dollar money supply is being pumped up at frightening speed. M3, a broad definition of the quantity of Dollars in circulation, grew by 10.9% in the 12-months ending May 31st. This rate of growth is the highest level seen since early 1985, yet Mr. Greenspan appears to turn a blind eye. Why?

Surely he can’t possibly believe that inflation is under control just because the government’s calculation of the Consumer Price Index has been relatively tame. Everyone knows that this basket of consumer items is an artificial creation that doesn’t accurately reflect the true cost of living.

Even some of the government’s own statistics show inflationary pressures are building. For example, wage rates are growing by 4.2% per annum, more than twice the level of just a couple of years ago.

Moreover, the CPI has been distorted by some unusual non-recurring events, which Mr. Greenspan has acknowledged in his presentations to Congress. The collapse in oil prices, while welcome to automobile owners, will not last forever. And the decline in grain prices due to ideal growing conditions could change overnight with the weather.

Advances in technology have also helped keep prices low. But where technology is not a factor, such as in real estate, prices are now going through the roof in many parts of the country.

The inflation in real estate is obvious. The speculation in the stock market, furiously being fanned by the Fed’s easy money stance (i.e., interest rates too low relative to the growth in the supply of money), is also obvious. But still Mr. Greenspan has chosen not to act. Why?

I think there are a couple of reasons for Mr. Greenspan’s inaction. The first is fear. The Fed said as much in the minutes of its Open Market Committee released on May 21st. The Fed is afraid to bump-up interest rates because any rise would sink the stock market, and now that the stock market has become so important to economic activity (i.e., consumers will continue spending money as long as they feel the ‘wealth effect’ from higher stock prices), any slump in stocks would quickly translate into an economic recession.

Also, despite all of the Fed’s and the federal government’s propaganda to the contrary, the Fed is not necessarily acting in our best interests. It first serves the will of its owners, namely, the big banks. Through their ownership of the Federal Reserve System as well as their influence peddling in Congress, the big banks have engineered for themselves the monopolistic control over this nation’s currency.

With the big banks reeling from mounting Asian losses and growing uncertainty about the rest of their loan portfolios exposed to that region, the last thing the banks want now is to have to start fighting on yet another front. Therefore, their foremost objective is to keep the US economy chugging along, so that the losses in Asia can be absorbed by profits they generate back home. As a consequence, monetary growth is allowed to surge by a compliant Fed.

Some may argue that this growth in money has no adverse consequences because price inflation is tame. However, I have already addressed that issue above.

Also, even if underlying inflationary pressures were not already building, this rapid growth in the money supply is still harmful. Among other things, it results in interest rates that are higher than would be the case if money were expanding slowly, or not at all.

These high rates in turn wreak havoc by weakening the ability of US manufacturers to compete internationally. The US balance of trade then falls into an imbalance through the relentless importation of less expensive foreign goods. It is no wonder that US manufacturing as a percentage of economic output has shrunk for thirty years while the deficit from the trade imbalance has ballooned. [For an excellent analysis of this relationship among money, manufacturing and interest rates, see Currency Debasement: Its Effect on the World Economy by Lawrence Parks, available for $5 from the Committee for Monetary Research & Education, 10004 Greenwood Court, Charlotte, North Carolina 28215-9621].

This US Dollar monetary growth can no longer remain unchecked. In fact, it is probably already too late to avoid the dire consequences from this abnormal surge in new money. We have crossed a threshold. The benign environment of recent years is behind us. Ahead is currency debasement and economic turmoil, and Asia is the trigger that will be alerting everyone that blind faith is not enough reason to hold national currencies in general and the US Dollar in particular.