What Are Banks Doing with Their Depositors’ Money?

February 26, 2010 – There have been numerous reports about the sharp decline in bank lending since the beginning of the financial crisis.  The Wall Street Journal, for example, on Wednesday reported in an article entitled “Lending Falls at Epic Pace” that last year’s decline in lending is the biggest since 1942.  It also provided the following chart to clearly make its point. 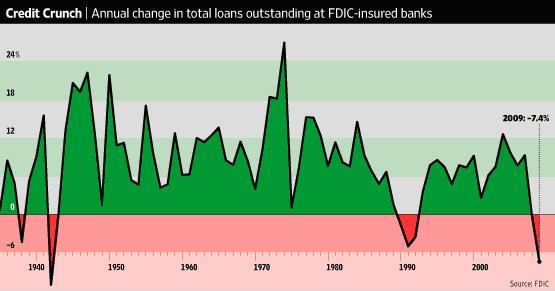 So if the banks are not making loans, what are they doing with depositor money?

Well, they are still lending, but not to businesses and consumers.  They are lending to the federal government.

If we mark the beginning of the financial crisis with the collapse of Bear Stearns in March 2008, data from the Federal Reserve show that since then bank lending has declined by $220 billion.  During this same period, banks increased the amount of US government paper they hold by $337 billion.

The change is even more dramatic when viewed from the peak of bank lending that occurred in the aftermath of the Lehman Brothers collapse.  Companies cut off from the commercial paper market in the financial turmoil then prevailing turned to the banks for liquidity.  By drawing down their credit lines, they caused bank loans to surge.  Bank loans have now declined $646 billion from their October 2008 peak, as illustrated in the following chart.

This significant shift in bank assets has implications for the economy and the US dollar.

Instead of depositor money being used to stimulate economic activity in the private sector by lending to businesses and consumers, the banks are helping to fund the growing federal deficits.  This re-allocation of resources has a negative long-term impact on the economy.  Depositor money is not being used for productive purposes like building manufacturing plants and making other investments that will create jobs and grow the economy.  It is being spent by the government, which consumes in the present and does not invest for the future.

This shift in bank assets also has negative implications for the dollar.  As the realization grows that the financial condition of the federal government is not much different from Greece and the dozens of other over-indebted countries, the value of US government paper declines as a consequence of the US government’s deteriorating creditworthiness.  Given that the quality of bank assets perforce determines the quality of the dollar, deterioration, i.e., debasement, of the dollar is inevitable as banks funnel depositor money into US government paper instead of making loans.